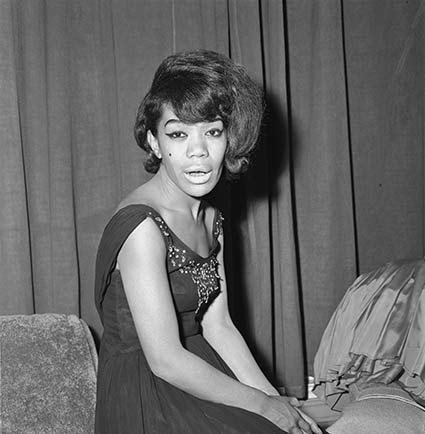 Growing up in the Fillmore district of San Francisco, Umpeylia Marsema Belinton knew from an early age that she was going to be singing the blues.

Her neighbour’s daughter, Jamesetta Hawkins, shared that belief and unsurprisingly they became the closest of friends.

Peylia, as she was known, recalls an upbringing in a racially-mixed community with Chinese, Spanish, Mexican, African American families as neighbours and that sitting on someone’s porch, singing in harmony occupied most of their leisure time. Visiting Jamesetta’s house, hearing her parents’ choice of music on the radio was her introduction to the Blues.

Still children, they would sing, dance and generally entertain passers-by, picking up a few nickels and dimes. Then Jamesetta fell in with a girl gang named The Lucky 20, was led astray, broke the law and did gaol time.

Released, she formed a vocal group which included, much to Peylia’s annoyance, her younger sister. The group came to the attention of and impressed Johnny Otis. He offered Jamesetta a contract, she accepted, and he name-changed her to Etta James.

Meanwhile Peylia, ever eager to perform and sing what she termed Gut Bucket Blues, would enter the Ellis Theatre Talent Show every Saturday and won it so often that the organisers had to tell her to stop entering their contest. Her big break came when she was just nineteen when she was talent-spotted at The Ellis Theatre by the omnipresent Johnny Otis who wanted to record her, but not before he name-changed the diminutive – she was 4 foot 11 inches tall, took shoe size 3 and weighed but 85 pounds – fireball to Little Miss Sugar Pie.

Some time later she was referred to by disc jockey Don Barksdale as Sugar Pie DeSanto, and this time it stuck and that’s the name she is known by across the world of the blues.

But is she as well-known as she deserves to be?  The answer is a resounding no, Sugar Pie’s enormous talent is criminally-ignored. Though a terrific singer and superb entertainer – she had an onstage habit of kicking off her shoes and doing standing back flips – she never has, yet, become a household name.

She was born in October 1935 in Brooklyn, New York, although she has been known to say that she was born in San Francisco. Her father was a Filipino, Egnacio Bindo Balinton, and her mother, Alice Coates, was an African American. She was one of 10 children. When she was four, the family moved to San Francisco which Sugar Pie came to regard as home.

Egnacio was a seaman from Manila, a strict Roman Catholic who very much disapproved of his teenage daughter going to nightclubs to sing with whatever band happened to be appearing and was particularly annoyed at the manner in which she would shake her booty. He was known to go onstage and pull her out of the club by her ear. Alice, however, was his polar opposite. A self-taught classical piano player of some note, she encouraged Sugar Pie at every step of the way.

Working with Johnny Otis was the dawn of what should have been a stellar career. James Brown saw her at The Apollo in New York 1959 and was so impressed that he took her on the road for two years, opening his show.

In 1960 she recorded the 45, “I Want To Know”, with her husband Pee Wee Kingsley which peaked at #4 on the national Rhythm & Blues Chart. They divorced, she was offered, and accepted, a $10,000 advance to sign for Chess Records and she relocated to Chicago.

Her role at Chess was as in-house songwriter. In all Sugar Pie has composed over 100 songs with Minnie Riperton, Fontella Bass and The Dells among the artists who recorded her compositions.

It has, more than once, been suggested that Chess preferred to keep her in the backroom team, just in case she might outshine their star girl singer of the time, Koko Taylor.

Sugar Pie DeSanto’s first recording for the Chess subsidiary label, Checker, was an answer to Tommy Tucker’s “Hi-Heel Sneakers” on the same label. It was remarkably similar in every way and was entitled “Slip-in Mules”. Her big one soon followed and it was to become her trademark song, “Soulful Dress”. It remained the feature number at her every performance.

The tiny Sugar Pie, dwarfed onstage by big men such as Wolf and Willie, was a real show-stopper, as anyone who was lucky enough to catch that tour will remember.

I was there for the show at Birmingham Town Hall, on a photo assignment for Melody Maker and I have to say that she was just as entertaining offstage as on, possessed with the wildest sense of humour. I just couldn’t, and still can’t, understand why she wasn’t, and didn’t become, a huge star.

Back Stateside, she co-write “Do I Make Myself Clear?” which she recorded singing with her teenage chum Etta James. The single made it to the Top Ten of the charts.

Sugar Pie still saw California as her home and moved back to Oakland with her husband Jesse Earl Davis and continued to record and tour through the USA and Europe. In 2006 tragedy struck when her husband of 27 years died while attempting to put out the fire that destroyed their apartment.

Sugar Pie DeSanto, who continued to deliver that dynamite of a performance into her eighties, is currently battling ill-health, but is reportedly planning to, at the age of 85, return to where she belongs, on a stage in front of an adoring audience.