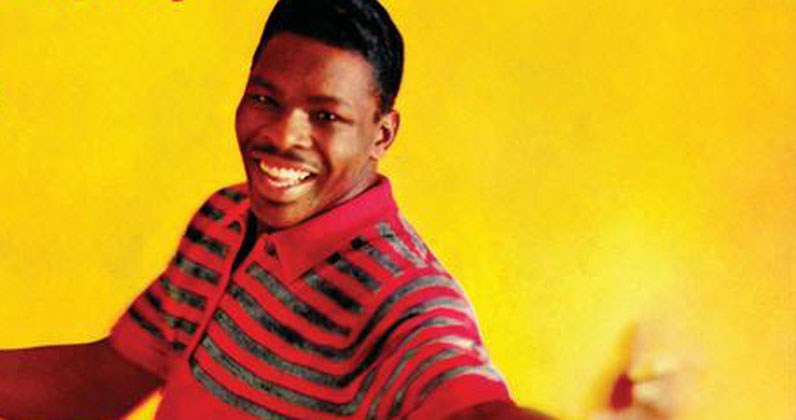 Lloyd Price was born in 1933 in the New Orleans suburb of Kenner. As he grew up, he took formal training on trumpet and piano, sang in his hometown gospel choir and as a teenager formed a band, The Blue Boys.

He was the eighth of eleven children born to Beatrice and Louis Price who owned a small café, The Fish ‘n’ Fry Restaurant, which had a piano and a jukebox that featured the latest blues 78s.

That jukebox must have influenced the Price offspring, with Lloyd’s younger brother Leo going on to make a name for himself, mostly as a composer, writing Little Richard’s “Send Me Some Lovin’” and “Can’t Believe You Wanna Leave” and appearing onstage as Little Leo Price. Lloyd, later to be known as an R&B singer, dropped out of high school to properly commit himself to music and soon landed a gig for The Blue Boys on WBOK in New Orleans, where DJ Okey Dokey Smith held sway.

Maxwell House Coffee were Okey Dokey’s sponsors and his catchphrase was “Lawdy Miss Clawdy, eat Mother’s homemade pies and drink Maxwell House Coffee!”. This caught the ear of young Lloyd, who sat down at the café piano and wrote a song.

Dave Bartholomew, musician and record producer and the big name in New Orleans music, dropped by The Fish ‘n’ Fry for a sandwich. Lloyd Price wrote, “I got on the piano and started singing ‘Lawdy Miss Clawdy’.” Bartholomew liked the song and told Lloyd, “I got a guy coming in from California who might record you, I want him to hear it.”

Lloyd thought he was joking and promptly forgot about it, but sure enough, a few weeks later Lloyd got the call. Bartholomew came to the café with none other than Art Rupe, the owner of Specialty Records, who of course thought the song could be a smash hit.

A month later, in March 1952, just four days after his 19th birthday, Lloyd Price found himself in Cosimo Matassa’s J & M Recording Studio on Rampart Street with Art Rupe, The Dave Bartholomew Band and Fats Domino, who had just dropped by the studio on a social visit. They recorded “Lawdy Miss Clawdy” in just two takes, a recording that became a monumental hit, staying for seven weeks at number one on the Billboard R & B chart and becoming a significant and early pointer to what was to become Rock & Roll.

“Lawdy Miss Clawdy” had over 100 cover versions, including those by Elvis Presley and Paul McCartney.

Art Rupe was to write, “That was the first Black record that wasn’t intended to be a white record, versus the previous Black records which were designed for the white market.”

The follow up, the poetically titled “Oooh, Oooh, Oooh”, was a significantly lesser hit, but Lloyd continued to record for Specialty until his career was interrupted in 1953 when he was drafted into the U.S. Army and deployed to Korea. While he was away, Chuck Berry, Fats Domino and Little Richard followed in his footsteps and enjoyed crossover success, Little Richard on Specialty whose stablemate, Larry Williams, Lloyd’s cousin and former chauffeur, enjoyed success with the single “Short Fat Fanny”.

In 1954, back in civilian life, Lloyd simply picked up where he left off, although he had to wait until 1957 for his next chart success. Displaying the beginning of what was to prove remarkable business acumen, he set up his own record company, KRC and recorded the “Just Because” 45, which, leased to ABC–Paramount Records, reached number 3 on the R&B chart and crossed over to the National chart at #28.

Signing direct to ABC, Lloyd enjoyed a series of hits that all carried the sound of New Orleans. These included “Personality” [Lloyd remembered, “I left New York driving to Pittsburgh. I put ‘Personality’ together between Exits 6 and 16. I didn’t write a word down. I memorised it and sang it all the way”], “I’m Gonna Get Married” and his biggie “Stagger Lee” which hit #1 on both the pop and R & B charts in 1959.

Remarkably, his entrepreneurial ability then really came to the fore. He set up Double L Records with Harold Logan with a roster that included the emerging Wilson Pickett.

Again with Harold, he opened The Turntable nightclub on the former site of the legendary Birdland jazz club. The partnership ended abruptly with the murder of Logan in the club’s office in 1969.

During the 1970s, the ever-resilient Lloyd Price teamed with boxing promoter Don King to present ‘The Rumble In The Jungle’ bout between Muhammad Ali and George Foreman in Zaire with its accompanying concert featuring B.B. King and James Brown. Don and Lloyd then formed a record label, LPG, which produced the last Lloyd Price Hit, “What Did You Do With My Love?”

Somewhere along the way, Lloyd Price owned two construction companies, one erecting middle-income housing in the Bronx, the other homes in Staten Island.

In 2011 he published his autobiography, modestly-titled “The True King of The Fifties: The Lloyd Price Story” and in 1994 he received The Pioneer Award from The Rhythm and Blues Foundation. Lloyd’s hometown, Kenner, dedicated a street to him the following year, Lloyd Price Avenue and Kenner still celebrates the annual Lloyd Price Day.

The lights went out for this remarkable man on the 3rd of May this year. He was 88 years old and died in Schaffer Extended Care in Westchester County, New York.