The Queen of White Trash Cajun 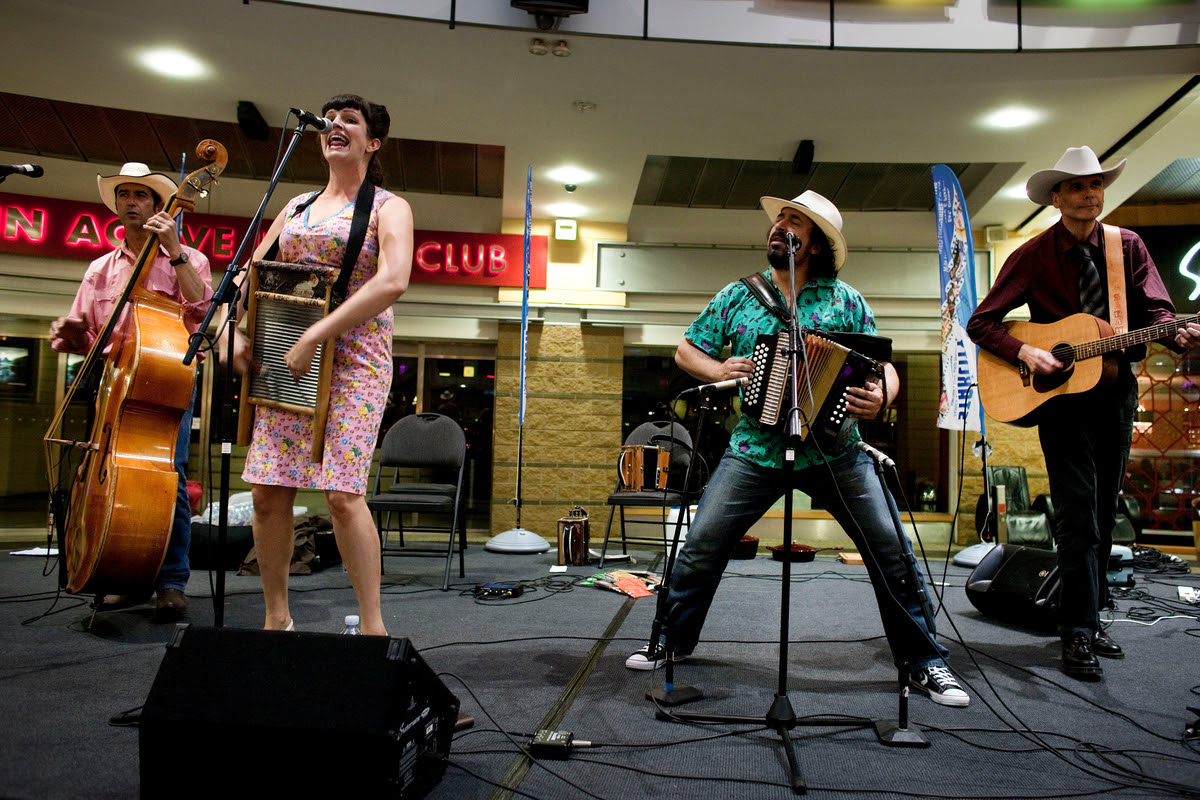 Although it is commonplace to comment, when a band is really rocking that they are cooking, it must be extremely rare for this activity to actually involve food, heat and the appropriate utensils onstage. In fact, in the more than 7000 performances over the 37 years of the Birmingham, Sandwell & Westside Jazz Festival, I can only recall it happening on one occasion and that was when the singer who rejoiced in the nickname, The Queen of White Trash Cajun, came to town.

In 2011 Sarah Savoy and the Francadians featured at Star City in the Jazz Festival. Sarah was born into the legendary Cajun family of accordionist Marc and singer/guitarist Ann Savoy, whose home town, Eunice, Louisiana, is deep in Cajun territory. Although Sarah grew up surrounded by their music, as a youngster she became infatuated with punk, purple hair and all that goes with that.

However, as a part of an important Cajun dynasty she still found herself getting  involved in various group, singing and playing guitar and accordion and appearing with her mother’s famous all-female group, The Magnolia Sisters. She studied Russian at University in Lafayette before eventually going to Moscow to continue studying the work of her favourite writer, Dostoyevski. Graduating, she stayed in Moscow, taking a job in marketing.

When she was invited to perform at a Cajun festival in France, Sarah rediscovered her roots and decided to stay in France, performed regularly with Cajun musicians and eventually formed her band, The Francadians, with musicians from Louisiana and Europe. The band included bass player Manolo Gonzales, whom she married.

But back to things culinary. On arrival in Birmingham, she sent the somewhat bemused festival staff on an errand to fulfil her wish-list of cooking paraphernalia that she insisted were central to her performance and which she proceeded to set up centre stage.

Come showtime, Sarah announced that she was going to deliver a programme of down-home Louisiana Cajun while preparing a meal of gumbo and jambalaya with which she would feed the audience during intermission – which indeed she did, with everyone dutifully standing in line with their cardboard plates and plastic forks waiting their turn to be served.

The bizarre circumstances in no way detracted from what was really a terrific performance. Sarah Savoy, clearly relishing every moment, was captivating and the band were really cooking – what else?

The French-speaking Acadians were driven out of their Canadian homeland by the British in the 18th century. Some were shipped to France, while the majority moved south until they eventually found a place where they could settle, in the swamps of South Louisiana. Over time, the word Acadian [previously Arcadian] changed to Cajun.

It can be difficult to distinguish between Cajun music and Zydeco, that of the rural poor, French Patois-speaking black inhabitants of neighbouring South West Louisiana. The fact that both communities are referred to as creoles further blurs the distinction, though the word Creole originally had no racial connotations; it simply meant “born in the New World”.

The King of Zydeco was Clifton Chenier, born to share croppers in Opelousas in 1925. He learned to play accordion, the essential instrument in Zydeco and in Cajun and he sang in Creole, English and French Patois.

He was working days and gigging locally until he decided to follow his elder brother, Cleveland, to work in the oilfields of Lake Charles and then on to Port Arthur where he worked in the Texaco Oil Refinery.

Chenier developed his very personal take on Zydeco, locally known as “la la” music, mixing in Cajun and a rough-edged blues that reflected the influences of Professor Longhair, Fats Domino, Jimmy and Joe Liggins. In 1955 he signed to Specialty, hit with “Ay-Tele-Fee” and went on the road with his Zodico Ramblers.

Two years later he moved over to Chess Records just as the U.S. market for Blues was weakening and it wasn’t until he signed to Arhoolie Records, where Chris Strachwitz  persuaded him to return to his Zydeco roots, that his career took a leap forward with his big-selling 1965 album “Bogulosa Boogie” and the hits “Louisiana Blues” and “Black Gal”.

Stanley Dural Jr was born in 1947 in Lafayette, one of 13 children. He picked cotton from when he was only five years old, and from this background somehow managed to become one of the few Zydeco musicians to break into the mainstream music business.

As accordion player and singer Buckwheat Zydeco, he went from playing in the bands of Joe Tex and Gatemouth Brown and then on to that of Clifton Chenier before  gigging with Eric Clapton, U2, Keith Richard, Robert Plant, Paul Simon, Ry Cooder and Willie Nelson. Buckwheat Zydeco died of lung cancer in the town where he was born in 1968.

Sidney Simien, known as Rockin’ Sidney, was another Zydeco star. Born in the tiny farming community of Lebeau, Louisiana, in 1938 into the Creole French-speaking family of Antoine Simien from Marseilles in France and his wife Marie, a free woman of colour and a plantation owner, he started to play guitar as a child and by the age of fifteen, influenced by swamp bluesman Slim Harpo,  was playing gigs.

At eighteen he made his first recording, “Make Me Understand” and five years later had a Louisiana regional hit with “No Good Woman”. The B side, his composition “You Ain’t Nothing But Fine” became a hit for The Fabulous Thunderbirds. Sidney continued to record and perform with modest success until the mid 1970s when he was persuaded to take up the accordion and focus on traditional Zydeco.

He recorded for Bally Hoo, set up his own Sid Sim Publishing company and had a hit with “Louisiana Creole Man”. His breakthrough came in 1984 when he became internationally known for his recording of his own song “My Toot Toot” which became a million-seller, was certified platinum and led to nationwide TV appearances.

The song was covered by many artists, including Fats Domino, John Fogerty and Denise Lasalle. A Spanish version,’Mi Cucu’, recorded by La Sonora Dinamita, sold over a million in Latin America while a German version, “Mein Tuut Tuut”, recorded by Leinemann made number 13 on the German chart and was licensed by a German Beer Company for radio and TV commercials.

Wisely, Sidney used his royalties from the song to buy himself the Lake Charles radio station KAOK, as well as the six acre Lake Charles entertainment complex Festival City and start his own record label, ZBC Records. Sidney continued to tour and make Zydeco recordings including “My Zydeco Shoes” and “Jalopeno Lena”, but died in Lake Charles from throat cancer in 1998 at only 59 years of age, leaving a wife, three sons and four grandchildren.

Rockin Dopsie was the stage name of Alton Jay Rubin born in Carencro, Louisiana, in 1932. The son of accordion player Walter Rubin, his first language was Louisiana Creole French.

He played accordion from the age of fourteen and quickly came to be as good a player as his father, playing local parties and dances. Moving with his parents to Lafayette, he began appearing at clubs while working days as an electrical contractor.

He recorded for a series of local labels before signing to Sonet Records of Sweden following what must have been an impressive performance at the New Orleans Jazz and Heritage Festival. Following the success of his first album, “Doin’ The Zydeco”, in 1976 he began touring regularly through Europe with his band, The Twisters and continued to record a string of albums for Sonet.

At last, in the 1980s he began to achieve recognition in the U.S., playing accordion on Paul Simon’s “Graceland” album, recording with Bob Dylan and Cyndi Lauper and appearing in the 1992 film, “Delta Heat”. His final album “Louisiana Music” received a nomination for a Grammy Award. Rockin’ Dopsie died from a heart attack in Opelousas in 1993, aged 61. He had eight children.

Dopsie often claimed that the reason he played accordion upside down was that “Daddy didn’t taught me no better. I just picked it up”.

Those old guys really were something else.