Buddy Guy: The Blues Is Alive And Well 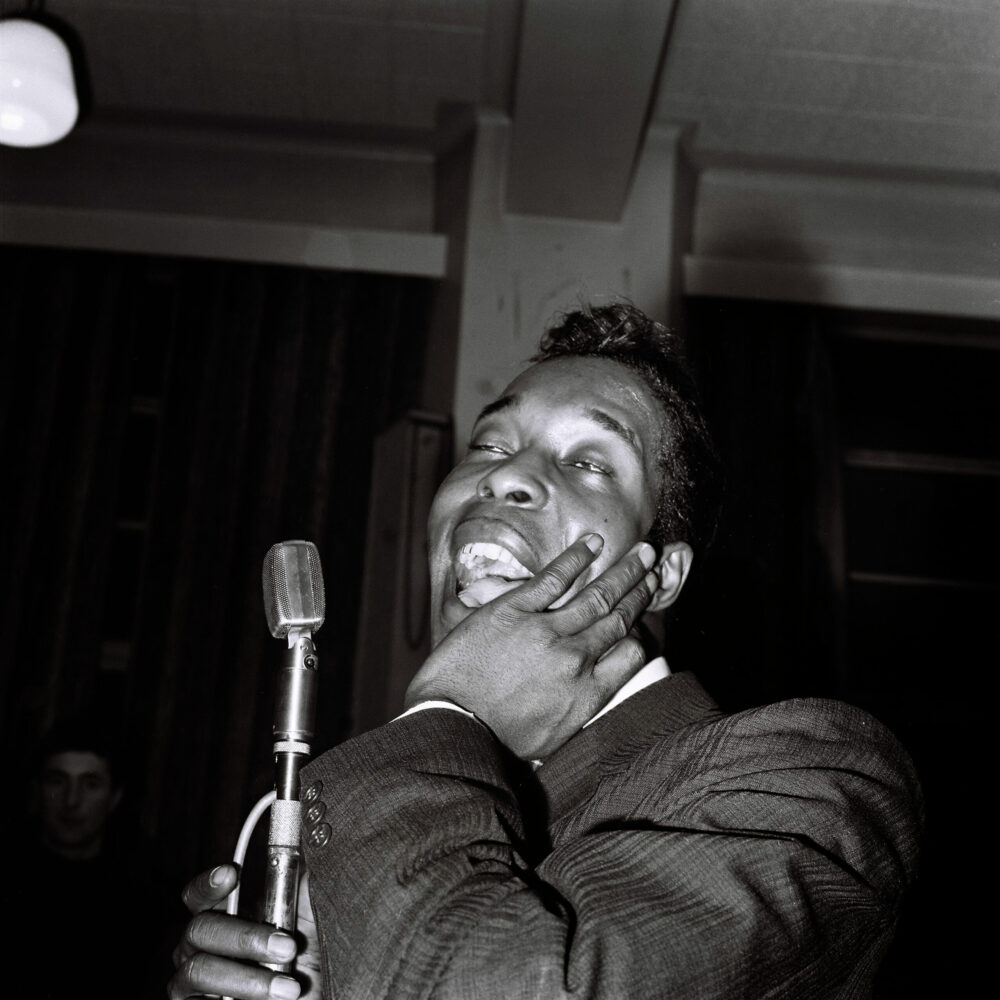 Continuing the Buddy Guy story. Follow the links to catch up on part one and part two

By 1965 Buddy had established himself so firmly in the firmament of Chicago Blues that he was invited to tour through UK and Europe featuring with that year’s prestigious American Folk Blues Festival. It’s less well-known that this was preceded as his first overseas tour by a solo tour earlier that year, organised by John Martin of Marquee Martin, details of which lurk somewhere in the mists of history, other than an appearance in Birmingham, which I organised at what is now Aston University, and another at The Marquee club in Wardour Street in London on February 25th 1965.

In the audience was the 19 year old Eric Clapton, who, in a February 1990 interview for BBC Radio 1 remembered, “Buddy Guy is my hero, this guy could do no wrong. They had him play in the Marquee one night with a pick-up band. This was long before Hendrix ever came to England and Buddy did everything.

He played guitar behind his head, he threw it on the floor, he played it with his feet, I mean he did everything. Everything that Jimi Hendrix later did. Except that Buddy was in this sharkskin suit, like a Rock and Roll suit. He was immaculate. He not only played it, he was the embodiment of what it is all about.

He is a beautiful man too. He just had this gentlemanly manner. The whole thing was just right. A quiet, soft-spoken guy who was just a maniac on stage. That was it, love at first sight.”

To my mind, Buddy Guy was the finest of that post-war crop of hotshot young Chicago guitarslingers that emerged in the early 1960s. He had impeccable taste, a stunning technique and a stage performance that was pure dynamite. They were all terrific, Jimmy Dawkins, Hubert Sumlin, Matt Murphy, Jimmy Rogers, Otis Rush, Earl Hooker, but Buddy was always the one that cut it for me.

Jimi Hendrix was profoundly influenced by Buddy Guy. Famously, he attended a blues workshop featuring Buddy, toting a reel-to-reel recorder, asking if he could tape him.

The international recognition he received that year was the beginning of a new era for Buddy Guy. He recorded in Chicago for Vanguard with Big Mama Thornton, Willie Dixon, Junior Wells and Otis Spann, embarked on his 37 year odyssey with Junior Wells, the Chicago-based West Memphis, Arkansas-born harmonica giant who was much later to appear in the Blues Brothers 2000 film.

They were to tour and record extensively together. We had the extreme pleasure of featuring them with their band in a sell-out Birmingham Town Hall performance, supported by Clarence Gatemouth Brown & Gate’s Texas Express at the 1989 Birmingham Jazz Festival. They recorded ten albums together from 1965 to 1993, the most pivotal of which came as a result of an approach by Eric Clapton, who had recently dissolved the supergroup Cream. He sought them out to record the album “Buddy Guy and Junior Wells play The Blues with Eric Clapton” for Atlantic’s Atco label.

1969 was an interesting year for Buddy. In March of that year, he appeared in Supershow, a concert in Staines, Middlesex alongside Eric Clapton, Jack Bruce, Stephen Stills, Buddy Miles – and Glen Campbell [!] – and then he undertook a tour of Central and East Africa organised by The U.S. State Department. The following year, along with Junior Wells, he supported The Rolling Stones on an extensive U.S. tour.

This was another breakthrough for the man Eric Clapton described as “the best guitar player alive”. Buddy has always credited British musicians, especially The Stones and Clapton, with boosting the careers of him and of other bluesmen. “Until the British came here playing The Blues”, he said, “white people didn’t know who Little Walter was, and it opened the door for everybody. That’s when America found out who Muddy Waters, Howlin’ Wolf, T-Bone Walker and B.B. King were.”

In 1972 Buddy Guy took the brave step, unusual for a blues musician, of opening his own club, The Checkerboard Lounge at 423 East 43rd. “I think I might have been the first blues musician to have a club,” he wrote.

“Back then there were blues clubs all over Chicago, but after the riots they disappeared, drugs took over and people weren’t drinking and listening to the music any more. All over town, there were clubs closing and I was thinking: where’s the next Eric Clapton, B.B. King or Muddy Waters going to be heard?

I just got my life savings and decided that I was going to open my own. I wasn’t looking for a big profit and even today I don’t make a lot of money from Legends, but I have a lot of fun watching other people play.” The Checkerboard, a kindly nod to Chess Records, was to enjoy a huge reputation internationally for such a small club.

Keith Richards and Mick Jagger just got to know each other over their mutual interest in Chess Records albums, and that they formed the band with the aim of turning people on to the Blues. It is easy to forget that they took the name of Muddy Waters’ first single, his 1950 recording of “Rollin’ Stone” as inspiration for the band’s name. When the band were in Chicago to play three nights at The Rosemount Horizon, as part of a mammoth U.S. tour, Muddy brought them after hours down to Buddy’s Checkerboard Lounge.

Fortuitously, there were cameras and recording gear at hand to record much of that memorable night. Jagger and the guys were clearly in awe and showing due respect to Muddy, Lefty Dizz, Junior Wells, Buddy Guy who they joined on stage for an unforgettable session. That event did much to cement the reputation of the Checkerboard Lounge in blues and rock and roll history.

L.C. Thurman was Buddy Guy’s partner in the venture, and when Buddy left the partnership in 1985, L.C. continued, moving location in 2003 until it finally closed with his death in 2015.

Buddy was to stay on the road and his 1975 tour of Japan was a landmark. By then he was beginning to get the recognition that he deserved: “possibly one of the finest guitarists of any kind, a magnetic singer and a consummate showman,” opined Coda Magazine, while the New York Times carried, “Brilliant guitarist, incredible showman”.

But Buddy clearly didn’t read, or didn’t take seriously, these comments, and remains ever self-critical, always burdened with insecurity. He said, despite the recognition of fellow musicians and audiences across the world, that he – inexplicably for such a wild performer – always suffered from stage fright. Onstage, Buddy is certainly no Miles Davis. He enjoys entertaining his audience with wisecracks that would do Richard Pryor or Moms Mabley proud.

As a youngster back in Louisiana he would use a cheap wine, known as schoolboy scotch, to calm his nerves. Later on he says that a couple of shots of cognac did the job. He also said, “I’ve never made a record that I really liked.” Quietly spoken, ever modest about his performances and achievements, he admits that the only time he has a drink is just before he goes on stage, nervous about what people might think about the show

He cannot fail to have been discouraged by some of the audiences in Germany booing him because they considered him too young, too slick, he carried no whiskey bottle onstage, totally failing to conform to their expectations that a bluesman should be ragged, old and drunk in order to be authentic.

Interestingly, BB King was to comment on an entirely different matter, that he was hurt that young black audiences were turning away from their own music, the Blues, seeing him as “a farmer, wearing overalls and smoking a corncob pipe. A grandfather playing their grandfather’s music.”

Buddy remained close to Muddy over the years, right through until the end. They shared many a stage and spent time together just talking, hanging out and enjoying each others company.

In 1983, Muddy’s drummer Ray Allison came over to Buddy’s to tell him “old man is kinda sick”. Muddy was dying of lung cancer, worried and scared. He told Buddy “Don’t let them goddam blues die on me, alright?”.

Muddy passed on just four days later and Buddy has never forgotten the responsibility that was passed on to him.