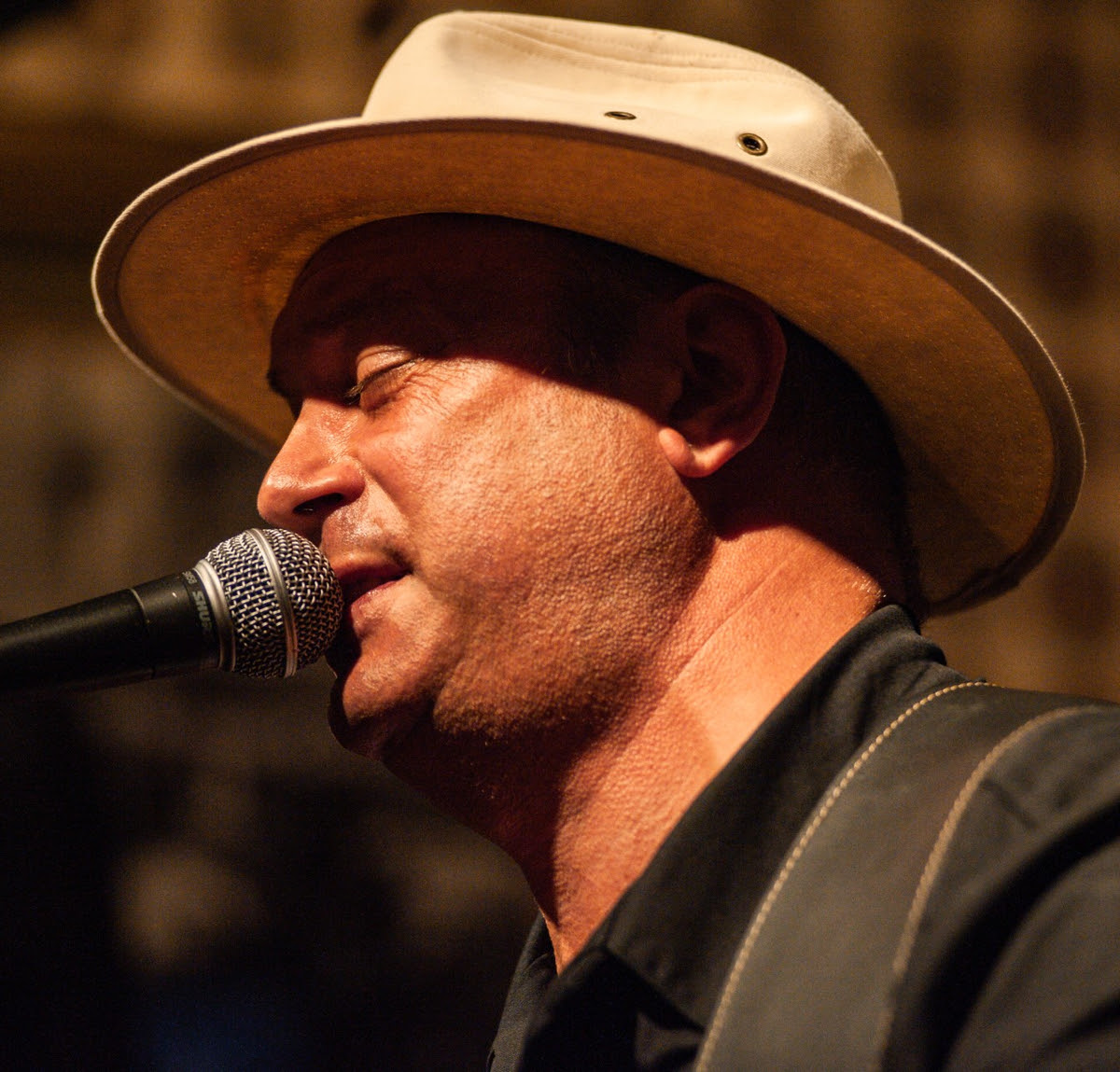 Sam Kennedy and his Band were one of the hits of this year’s Birmingham, Sandwell & Westside Jazz Festival. Sam plays guitar and sings, Ian Jennings is on double bass and the drummer is Lucy Piper, daughter of guitarist Julian Piper, an early British Blues Pioneer who enjoyed an impressive playing and band-leading career which included performances with American bluesmen both in the UK and the U.S.

Sam was a new name to me, and I just couldn’t understand how anyone that good, with such a rocking little band, could have evaded my attention. So I set about getting the facts, and fascinating they were.

It looks like he was born in London to a mother who had the good judgement to be a collector of Sun Records. Elvis, Jerry Lee and Johnny Cash all stick in Sam’s memory as the soundtrack to his early childhood, but he soon dug a little deeper into rhythm and blues. By the age of 14, he was playing guitar, his inspiration coming from AC/DC, Black Sabbath and Jimi Hendrix which soon led him to discover Stevie Ray Vaughan, Robert Johnson, B.B.King and the like. He quickly learned the importance of working hard on his technique while keeping things simple.

Playing in various bands with his friends, his confidence growing, while still in his teens, he was wont to travel from his East London home to the world of Soho’s blues dives, places like The 12 Bar Club, The Acoustic Cafe and Ain’t Nothin’ But The Blues where he became a regular, and welcome, sitter-in with many of the older blues guys. The Acoustic Cafe became his regular haunt, when he found himself homeless for a couple of years, and one night that he says he won’t forget, after he had been listening to Wizz Jones and Bert Jansch at The 12 Bar Club, he wandered out onto Denmark Street, and heard the sound of a blues band from just over the road.

He went up to the doorman of this packed little venue who unbeknown to Sam at that time was known as King Rollo, and asked if he could play a couple of numbers, was told OK and after his performance he says that he was taken aside by “three gents”. After asking if he had a band and being told no, they then offered him a Saturday night residency to play a few numbers for which they would pay him £35. Sam remembers that so many venues featured Blues, Rhythm & Blues and Rock and Roll and looking back on that time considers it to have been a fantastic experience.

At 27 years of age Sam left the UK on a 6 month open-ended flight ticket to stay with his brother, Ashley, in Montreal. He gigged around, sat in with bands at blues clubs, tried to form a band, but inevitably, he ran out of money. Ever enterprising, he took a job rigging boats, whatever that is, and found himself based out of Gibraltar, then Parma in Italy and finally Antigua.

Four years later, he returned to London and more-or-less picked up where he had left off, playing guitar in central London pubs before deciding in 2001 to relocate to Devon, where the same brother from Canada was then based. Sam took a job running a bar above a restaurant, had a go at taking a proper job, working with a property developer, and started to teach guitar.

Sam found himself gigging in South Wales with a musical associate from his time at The Acoustic Café, the former Robert Plant sideman Paul Martinez on bass with Paul’s brother, Rick on drums. Sam also linked up with an old school pal, clarinettist, guitarist and singer Jules Landau they opened a jazz club in Bristol called The Looking Glass, in a building now sadly derelict where Sam ran the very late night jam sessions.

This all led to Sam becoming a singer. Jules tired of hearing him complain about not being able to find the right singer for his band and apparently told him “you’ve had the guitar down since you were at school, your voice matches your guitar, just get on with it”.

Over these years, he took whatever music gigs came his way, including a spell in the pit orchestra at The Northcott Theatre for Jesus Christ Superstar before he eventually got serious about forming his own band, which was supposed to be the very reason he came back to the UK in the first place. However, the old sea dog in him hadn’t quite gone away.

Between land-based work in Devon he still found himself sailing the seas delivering yachts until a couple of years ago, but now, and for the very good reason that he is a terrific blues guitarist and singer, he’s determined to keep his band on the road, delivering that good-time Rock and Roll and Rhythm & Blues that he found so inspiring all those years and so many sea miles ago.

Let’s hope that we can find a way to bring The Sam Kennedy Band back to play Henry’s Blueshouse before too long – but it is one long drive from Devon.