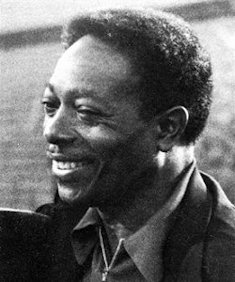 On January 6th in 1973 I took off on a 5 week tour in the company of Homesick James, Snooky ‘Little Bear’ Pryor, Boogie Woogie Red, Lightnin’ Slim, Washboard Willie and Whispering Smith. Brummie guitarist Roger Hill, playing bass on this trip and drummer Tom Farnell – dubbed Uncle Tom only partly because of his avuncular manner – completed the line-up while Rob Cowlyn, whose impulse purchase of a puce green Mercedes van, triggered off the whole affair, did the driving.

This was American Blues Legends 73, the first of Big Bear Records touring blues package shows. By March 1st that year, it had played in front of nearly 35,000 people in 33 concerts in 35 days. We visited 10 countries and the guys appeared on 3 TV and 7 radio shows as well as recording the American Blues Legends 73 album in Chalk Farm Recording Studios, the fourth blues album released by Big Bear. The previous releases were by Gene “The Mighty Flea” Connors, Doctor Ross The Harmonica Boss and Oakland Johnny Mars.

Prior to this venture, Big Bear had been bringing over and touring individual bluesmen such as the Canadian harmonica player and singer, The King Biscuit Boy, as well as Americans Eddie Guitar Burns, Lightnin’ Slim and The Mighty Flea, but this all changed when Rob Cowlyn, who worked at Big Bear, bought that van. His idea was to get work as a roadie, but that was slow to materialise and he would complain to me that the payments were crippling him. It didn’t require any great imagination for me to come up with a plan to solve his problem and allow me to indulge a fantasy.

Unsurprisingly, we all had a ball. These guys, who back home in the States worked day jobs, only performing evenings and weekends, took to those big stages with a swagger that suggested that they had never done anything else. They were all terrific, but one man in that group stood out, not only for his unusual voice and straight-ahead Swamp blues harmonica, but also for his dignity – urbanity, even. This was impressive in itself, but much more so when you bear in mind that he had just left behind his day job, building swimming pools in Baton Rouge, Louisiana. I remember with a smile to this day, how every night of that tour, Lightnin’ Slim would holler, “Blow that harmonica, son,” to signify that Whispering Smith should step forward to take his solo.

Those two Baton Rouge Swamp bluesmen, neither of them actually born in Louisiana, had gigged together since 1960, and recorded for Excello Records in Crowley in 1963 and 1964. It was Slim who had suggested to me that we bring over Smith for this tour – not that it took much persuading as I was already an admirer of his Excello, later Arhoolie and Blues Horizon, recordings.

It is always hard to understand why some bluesmen, with ability, charisma and attitude aplenty, somehow slip through the cracks where public recognition is concerned. Known and respected by fellow musician and collectors, they somehow manage to elude the fame their ability deserves, leaving them having to take work outside of music. Whispering Smith was a prime example.

Moses Smith was born in January 1932 in Union Church, Jefferson Country, Mississippi. At the age of 14 he was singing and blowing harmonica in a band playing the local jukes in Brookhaven through to 1957 when he moved to Baton Rouge. He found himself work outside music, but continued to perform in bars and taverns and teamed with Lightnin’ Slim, some 20 years his elder, always a father figure to Moses. He went pro and took to the road with his own band from 1962 to 1966 before returning to the day job.

Things looked to be taking a turn for the better as the 1970s dawned, recording for Excello and Arhoolie, played on Silas Hogan’s recordings for Mike Vernon’s Blues Horizon the following year.

In 1973 he came over for that American Blues Legends tour when his performances were captured on that famous “Old Grey Whistle Test” 40-minute TV special filmed live at Brighton Polytechnic.

He came back to the UK and Europe the following year, on a Big Bear tour with Lightnin’ Slim and again, he was a real success with his uncomplicated but effective swamp harmonica and his unique, unusually hoarse, powerful and gritty vocals, which had earned him his Whispering nickname. Somehow, back home in the U.S. he still didn’t make that breakthrough, his career affected by the fall from popularity of swamp blues as the black audiences began turning to Zydeco.

We stayed in touch through the 1970s, but although he was inducted into The Louisiana Blues Hall of Fame, he returned to his day job playing locally for fun. Maybe he simply didn’t feel the need to make a name for himself.

He was a kindly, placid man, ever smiling, married with six children. Perhaps that was enough for him.

Moses Whispering Smith died in Baton Rouse in 1984, aged just 52. I still play the two songs he recorded for Big Bear, “Texas Flood” and “Take Me Back Baby”, and I can still hear Slim’s cry, “Blow That Harmonica, Son.”