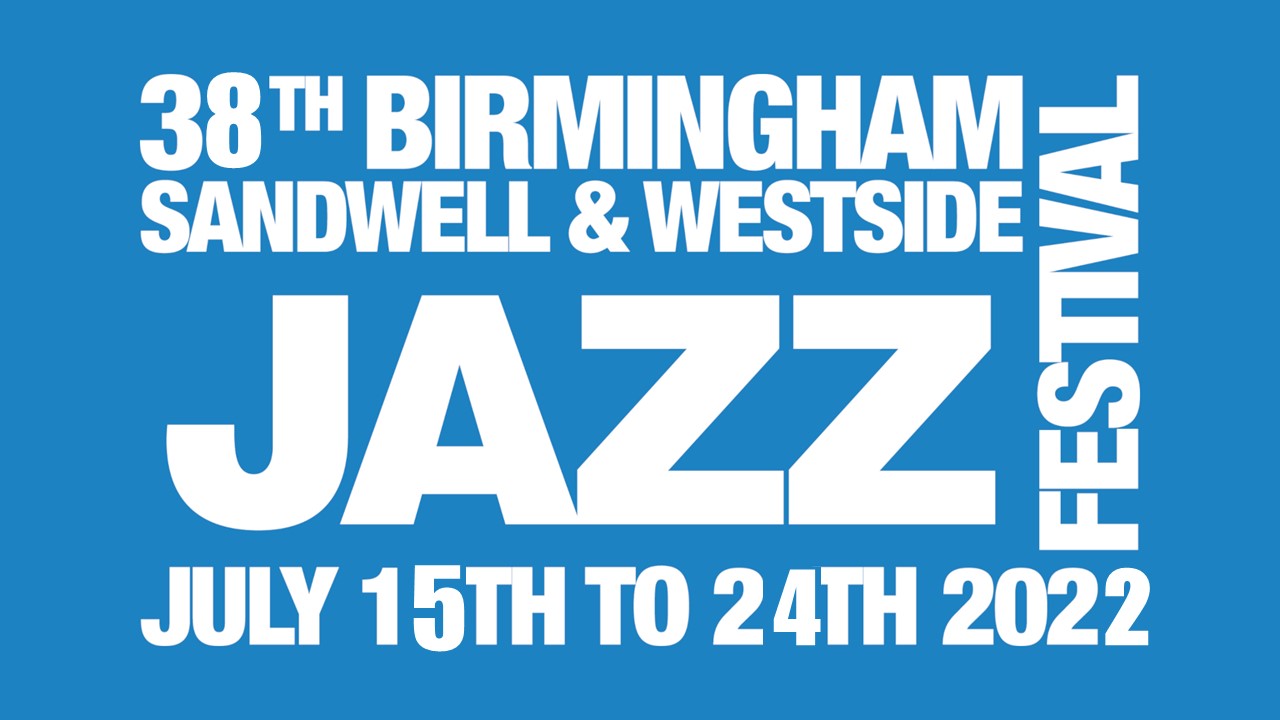 The most important thing to happen every July hereabouts is the annual jazz festival.

Jazz, I hear you say, what’s that to do with us blues guys?

Well, admittedly, most jazz festivals deliver what it says on the tin, but The Birmingham, Sandwell and Westside Jazz Festival is really like no other. This, the 38th consecutive year of the festival, just like the earlier editions, features swing, Dixie, gypsy and big band jazz, some ska, barber-shop quartets – and The Blues. Lots of it. Some 60 performances over the 10 days of July15 to 24 – and almost all of it is free admission.

Blues bill-toppers are what might well be the hottest blues outfit on this, or any other, planet – The Hitman Blues Band from New York City, a rocking nine-piece fronted by singer and guitar man Russell Alexander. Hitman will play five shows during the festival as part of a UK tour. There’s a nice historical note here. Russell is the son of Ray Alexander, the vibraphone player and drummer of note who played on that seminal album, “Beauty and the Beat” with Peggy Lee and George Shearing. Ray became a good friend of our festival, a regular first-in-the-diary for many years, and we still miss him.

The Shufflepack are firm favourites at Henry’s Blueshouse, guaranteed crowd-pleasers, fronted by singer/harmonica player Stuart Maxwell who is also a blues writer of distinction, contributing to several publications including our own “Jazz Rag” and Henry’s Bluesletter. Stuart and his merry men from deepest Tring are determined to be named “Band of the Festival” once again and will play six shows at this year’s event.

The Cinelli Brothers can justifiably claim to be the UK’s leading blues combo, having been nominated Blues Band of the Year in the UK Blues Awards for the last three years. Their music is rooted in 1960s/1970s Chicago and Texas blues and they are fronted by guitarist/singer Mario Cinelli, his brother, drummer Alessandro, harmonica player and singer Tom Julian Jones and bass player and singer Stephen Giry. Their debut album, “Babe, Please Set Your Alarm”, made Number 2 on The Independent Blues Broadcaster chart in 2018 and their “Villa Jukejoint” follow-up was nominated for UK Blues Awards Blues Album of the Year.

The gritty rhythm and blues of The Nitecrawlers, nicely captured on their debut album “Unlock the Blues”, has put them at the top of the tree when it comes to Midlands-based blues bands. A top draw at their spiritual home, Henry’s Blueshouse where they always deliver a fun-filled programme of irresistibly rocking blues.

The down home blues of the Birmingham-based Whiskey Brothers comes straight out of the 1940s/1950s Mississippi juke joints, as can be heard on their Big Bear Records album, “Bottle Up and Go”.

There’s no band we have seen in recent years that gets so much pleasure in playing the blues as those stars from deep in the Lower Gornal delta, Big Jim and the Alabama Boogie Boys – superb stuff!

James Oliver is a big man in several ways – stature, personality, and presence – a guitar hero. Never forgetting to remind his audience of his roots in the Welsh Valleys, James has taken the UK blues scene by storm and is impossible to ignore. He’s worked with Albert Lee, Bill Kirchen and Greg Koch, but is firmly at home with his own dynamic band. The late and great Deke Leonard of Man and Iceberg summed it up nicely, “Speaking as a guitarist, James Oliver scares the hell out of me.”

Ricky Cool is a long-established leading figure in the UK world of rhythm and blues. Harmonica player, singer, saxophonist and bandleader Ricky’s bands have always left their mark, The Texas Turkeys, The Big Town Playboys, The Icebergs and his current outfit, The In Crowd, who deliver 1960s style rhythm and blues, Jamaican ska and blue beat, have always been right up there with the very best.

The Catfish Kings are from Brighton, though bandleader Harry Lang originally hailed from Birmingham where he achieved a degree of national notoriety with his song, “Girl on Page 3” by Bullets on Big Bear Records. A not totally favourable comment on the Sun newspaper’s Page 3 girl feature, which attracted the attention of that publication’s legal department. The Catfish Kings’ signature rock and roll, boogie and rhythm and blues has built them a formidable reputation across the UK and particularly in Birmingham were they are regular visitors.

Another big attraction hereabouts are those specialists in the bar-room boogie and blues of New Orleans, the Lancashire-based hotshots, Tipitina. Always a significant attraction across the UK, their two Big Bear albums, “I Wish I Was in New Orleans” and “Taking Care of Business”, contributed to their burgeoning international reputation.

Chickenbone John, The King of The Cigar Box Guitar, is something of a legend across the blues world. He was the main feature of the BBC  documentary, “Cigar Box Blues”, and delivers a rocking and riveting onstage performance, playing his own cigar box guitar and singing, often in the company of a harmonica player, sometimes Ricky Cool – who enjoys going back to the roots of the blues -, other times with Harmonica Dave.

Roy Forbes, believed by many, including this writer, to be the finest male jazz singer in the UK, has of late been returning to his roots, the blues. He has been a welcomed sitter-in with The Nitecrawlers and with Chickenbone John, and now, with his appetite for the blues well and truly whetted, he has formed his own blues outfit, Roy Forbes and the Texas Rumble. Look out for his very classy and ever-swinging new blues combo.

Roy Forbes, believed by many, including this writer, to be the finest male jazz singer in the UK, has of late been returning to his roots, the blues. He has been a welcomed sitter-in with The Nitecrawlers and with Chickenbone John, and now, with his appetite for the blues well and truly whetted, he has formed his own blues outfit, Roy Forbes and the Texas Rumble. Look out for his very classy and ever-swinging new blues combo.

Extremely interesting, very talented and unusual blues performers are Black Country-based Sunjay and Londoner Ajay. Sunjay is a regular and always welcome attraction at Henry’s Blueshouse and has been awarded the Young Performers Award at the Wath Folk Festival, nominated for the New Roots Award and the British Blues Young Artist Award. Ajay Srivastav’s rootsy guitar playing has picked up rave reviews from Blues In Britain, Blues Matters Magazine and Cerys Matthews on BBC Radio 2 as well as being nominated for ‘Album Of The Year’ on Blues & Roots Radio.

Leicestershire’s The Martin Burch Band have built up a real following in Birmingham, most recently starring on the Blues For Ukraine night. Their blues are high energy reminiscent of Rory Gallagher and free back in the 60s blues boom.

The Shakedown Brothers and Henry’s Blueshouse go back a long, long way, with drummer and bandleader playing at Henry’s with the band Ginger in the 1960s. Theirs is the classic blues of Albert King, Howlin’ Wolf and Buddy Guy.

There will also be a full programme throughout the day at Henry’s Blueshouse on Bluesday 19th July, with workshops, talks and live performances – more information on this in an upcoming Bluesletter.

For those bluesers still on their feet and in need of yet more blues by the final day of the festival, Sunday 24th July, here’s an unusual date for your diary. Saxophonist Art Themen, who enjoyed a career as a leading orthopaedic surgeon, is a legend in the jazz world. His fierce swinging bebop playing earned him a formidable reputation back in the 1960s which he has continued to enhance ever since. However, it’s not widely known that also in that decade he was playing in bands with such great blues/rock musicians as Jack Bruce, he of Cream fame, and was also a member of the genuinely legendary early British blues combo, Alexis Korner’s Blues Incorporated. Art also featured in Long John Baldry’s Hoochie Coochie Men alongside back-up vocalist Rod Stewart and pianist Reg Dwight, later to emerge as Elton John.

Art Themen clearly has impressive blues credentials. He also has a long-standing rivalry with tenor sax man with The Shufflepack, Tom Domagala and relishes every opportunity to lock horns and produce the most exciting rhythm and blues together. Do you find it a coincidence or cunning programming that on Bluesday 19th July the festival programme reads:

None of these venues is as much as five minutes stroll from each other, so look out for fireworks! A suitable reminder, if one was necessary, that jazz and blues came out of the same cradle. They just grew up differently.