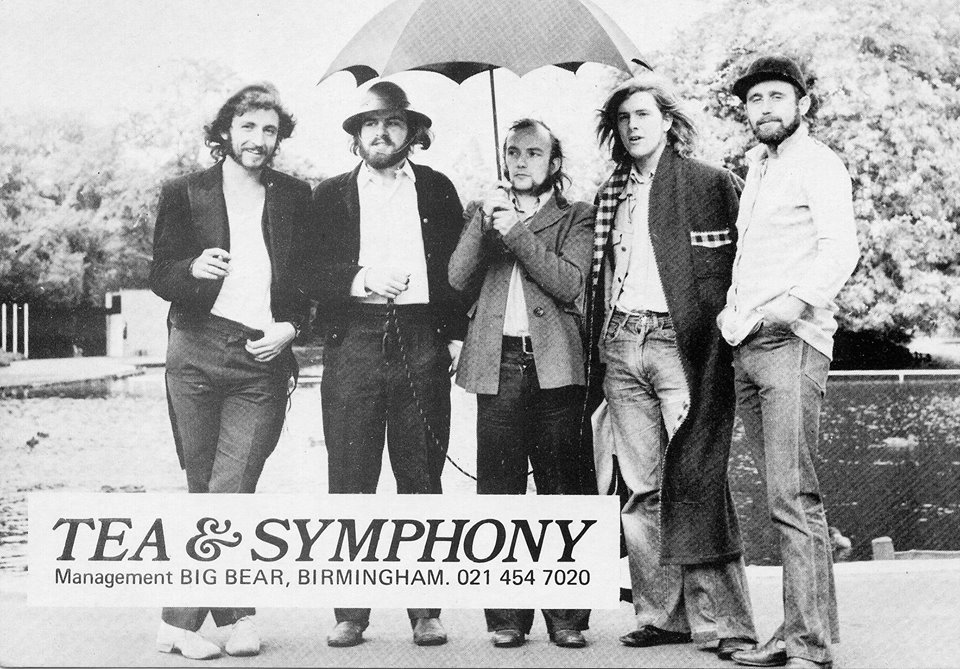 Back in the late 1960s, the Moseley band Tea & Symphony regularly appeared at Henry’s Blueshouse.

Are there any original Henry’s Blueshouse members out there that remember a Tea & Symphony show, supported by Dark Tower, at Digbeth Civic Hall on New Years Eve in 1969? Curiously, I have received two separate enquiries regarding this no-doubt unforgettable [to everyone, that is, except me] occasion. In the late 1960s Tea & Symphony, who seemed to musically capture everything that was happening in the Moseley hippie movement, at one time seemed on course to world domination.

There were, unsurprisingly, several comings and goings regarding personnel, but the nucleus consisted of James Langston, who used to sign off his letters to me as Hymie Langfroid, Jef Daw, a leading purveyor of fine herbs, and Nigel Phillips, who somehow survived the mayhem and went on to enjoy an apparently successful and blameless career as a schoolteacher.

Tea & Symphony were managed by Big Bear, we signed them to EMI Harvest for recording and in the first release was the gloriously nutty and appropriately titled “An Asylum For The Musically Insane” [1969] which, to the amazement of us all, went on to garner some excellent reviews.

The band had always gigged regularly, but with the release of that first album, the datesheet blossomed to include European touring. I well remember an appearance by Tea & Symphony on the legendary P series of music programmes on Suddeutscher Rundfunk in Stuttgart which much have left most of Southern Germany bemused and confused, but not a little intrigued. The band for that trip included Mick Hincks and Bob Lamb from Locomotive. They were probably equally confused.

Their second album came in 1970 by which time Nigel had left to be replaced by Bob Wilson, with drummer Pete Chatfield coming on board as a regular member. To my embarrassment, I cannot recall the name of the fifth member.

The album was a radical departure from the first and a remarkable achievement with side one capturing the sounds, sights and smells of Ladypool Road in Moseley, The album was called “Jo Sago”, after a mythical Caribbean immigrant who was initially adrift and isolated in a white man’s world, until he found himself a new home in Moseley. “Jo Sago” generated much media coverage, but it would be true to say that not all of it suggested that the message had got through.

The Tea & Symphony single, the Procul Harum song “Boredom”, generated significant radio play, and for a time threatened the lower end of the charts, but it wasn’t really what the band were about. With such songwriters in the band, it wasn’t too clever of the production company to convince us that T & S needed a hit to survive. They were an extremely, individual and niche band with something powerful and individual to say and they had built their own dedicated following who must have been disappointed to hear them cover a Procul Harum song. It was a nice recording, I still enjoy it, but it just wasn’t Tea & Symphony.

Apart from re-issues over the years, the only other Tea & Symphony appearance on vinyl was the “Maybe My Mind [with Egg]” track from the “An Asylum For Musically Insane” album that appeared on the Harvest sampler, “Picnic – A Breath of Fresh Air”.

I can’t remember exactly how the disintegration happened.

Disillusion must have set in, not surprising with so many creative minds in overdrive, and the musicians began to drift away. At some point, I heard the sad news that Jef Daw had died young unexpectedly on a beach in France after an energetic sea-swim, James soldiered on with several well-respected blues-rooted bands including Hooker, School Sports and Mean Street Dealers until relocating to Cornwall, Bob Wilson continues to be Bob Wilson to this day, still an extremely valuable part of this city’s music fabric, and as far as I know, Pete Chatfield is still playing. I would like to think that other Tea & Symphony musicians, Jonathan Benyon, Dave Carroll and Tom Bennison, have continued to play and enjoy good music.

A final note, Jef did spell his name this way, not Jeff, as wrongly appears in many other references to Tea & Symphony.