Looking Back At Early Henry’s 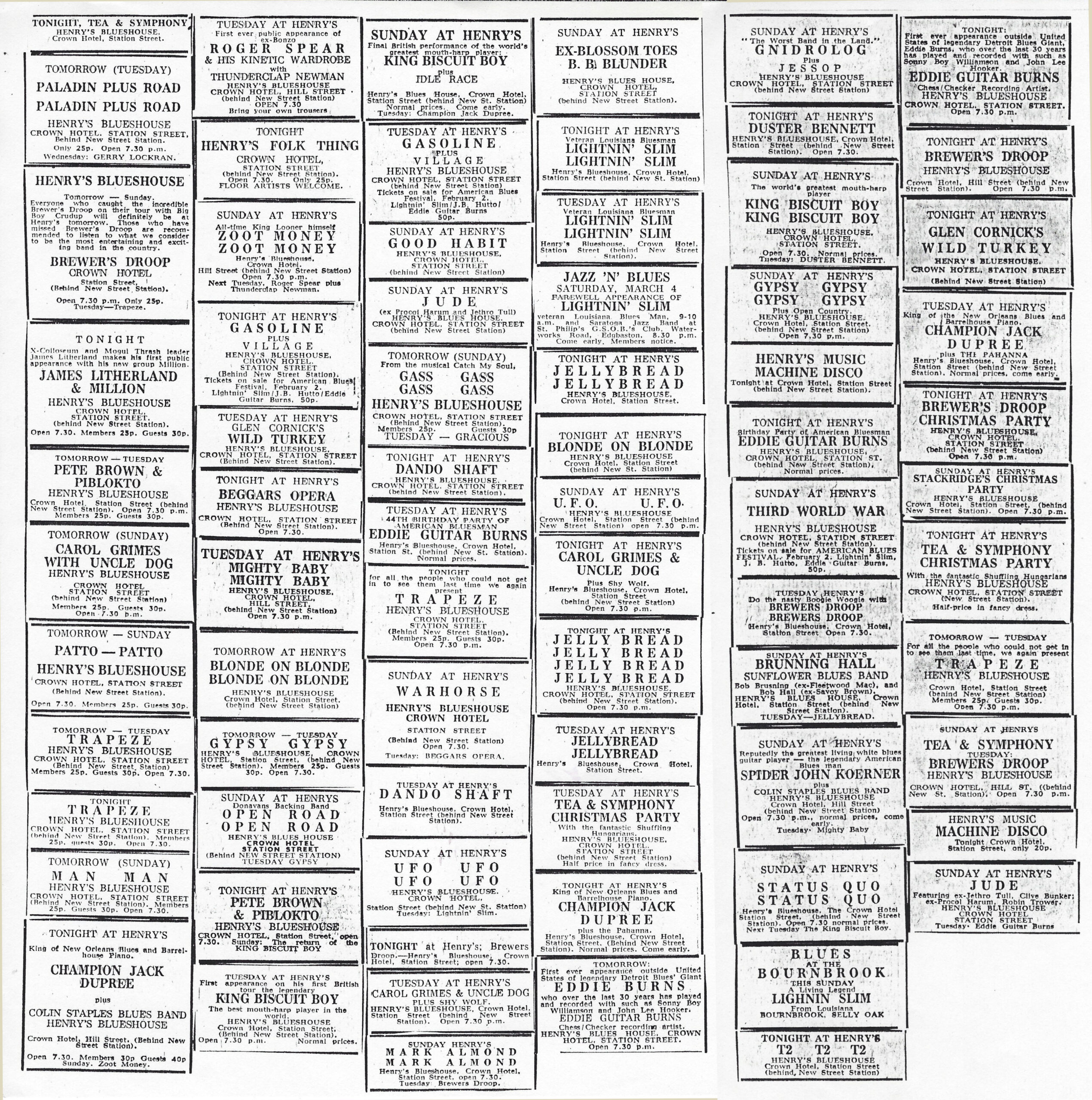 Taking advantage of the forced lull in our life, thanks to Covid, we are endeavouring to put the Big Bear archives into some semblance of order – and finding it fascinating!

A recent discovery was several pages of Henry’s advertisements from the Birmingham Mail. The actual dates are unclear but it’s obvious that Henry’s carried on longer than I have always believed as several of the American Bluesmen we brought over in 1972 and 1973 appeared there, contradicting my belief that we closed around 1970 when I went on the road with Black Sabbath.

I know that a lot of folk out there remember seeing Champion Jack Dupree, Status Quo [members 25 pence, Guests 30 pence!] Eddie Guitar Burns and Arthur ‘Big Boy’ Crudup at Henry’s because you talk about it, but who remembers Spider John Koerner, billed as “The greatest living American white blues player”, or Brewers Droop or Glen Cornick Wild Turkey?

Still playing the Blues, born in Rochester, New York, influenced by Bob Dylan, who mentioned him in his book, Koerner seems to have recorded with Dave Ray and Tony Glover as Koerner, Ray and Glover. I remember enjoying his Henry’s performance though I have to admit that the billing in the gig advertisement was a little over-the-top. The Quo gig was a gasser, of course, with as many people outside trying to get in, as they were inside the venue. Naturally Eddie Guitar Burns and Arthur Crudup gave memorable performances, as they unfailingly did, while Brewers Droop were, well, just the usual cool, calm, cultured selves – anyone who saw them knows that’s not the truth!

The Glen Cornick Wild Turkey was, as I recall, a one-off.

Not that they weren’t impressive – I remember their performance as a good one – but I don’t think that they stayed together long. Glen was the original bassist with Jethro Tull, with that band from 1967 to 1970. He left to join Paris, the American rock power trio with guitarist Bob Welch who had just left Fleetwood Mac and drummer Thom Mooney who had been in Nazz with Todd Rundgren. Paris lasted until 1970 when Glen formed Wild Turkey who recorded two albums before splitting. Glenn Douglas Bernard Cornick was born in Barrow-in-Furness in 1947 and died aged 67 in Hawaii in 2014.

Scanning the advertisements, the names Gypsy, Stackridge, Patto and Dando Shaft pop up – does anyone remember them?

Or, how about Gnidrolog, modestly billed as “The Worst Band in the Land”?