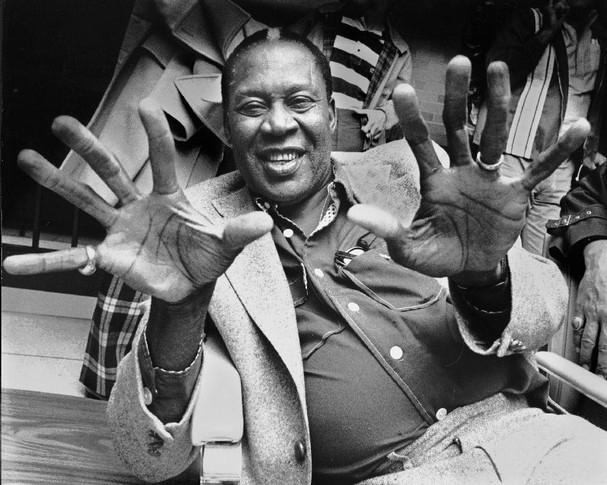 Since the early 1920s Paris had become a bolt-hole for black American musicians. During the First World War black U.S. troops had discovered a racial freedom that was denied them back home and, when the Jazz Age hit a few years later, France – and Paris in particular – welcomed American music with open arms. Among those who took up temporary residence in the city were Coleman Hawkins, Sidney Bechet, Bill Coleman, Bud Powell and, briefly, even Louis Armstrong.

In 1962, having been much impressed by the response to his performances on a European tour two years previously, Memphis Slim made Paris his home and stayed there for the rest of his days. He had been living in Chicago and recording with such folk as Big Bill Broonzy, Sonny Boy Rice Miller and Willie Dixon for Miracle, Chess, Veejay, Bluesville and Bluebird. Unfortunately right across the U.S.A. the Blues had slipped out of fashion and he was scuffling to make a living.

Always an independent spirit, Memphis Slim decided to move to Paris which was not only of benefit to him, but immensely so to the burgeoning blues movement across Europe. Suddenly we had a real living true Blues Legend based only one hour’s flight away. From featuring in the Paris niteries Slim quickly became a concert attraction, on occasion arriving at gigs in a Rolls Royce. He was not in the slightest a pretentious man, so I’m convinced that was a management publicity ploy.

To avoid confusion, it is generally believed that he was born Peter Chatman, but in fact that was the name of his singing, guitar-and piano-playing, Juke Joint-operating father. John Len Chatman, born in Memphis in 1915, used that name as a mark of respect to his father and continued to do so for his songwriting – and sometimes even on contracts – for the rest of his life.

Even his gravestone bears the name “Peter Chatman”.  Named Memphis Slim by Lester Melrose of Bluebird Records who recorded him with Sonny Boy One, Washboard Sam and Jazz Gillum, Slim created a huge catalogue of recordings and was a prolific songwriter with such titles as “Messin’ Around” which reached Number 1 on the R&B chart, “The Comeback” and “Every Day I Have the Blues”.

First recorded by Slim as “Nobody Loves Me” in 1950, the song was subsequently waxed under its more familiar title, “Every Day I Have the Blues” by B.B. King, Ray Charles, Ella Fitzgerald, T Bone Walker, Jimi Hendrix and dozens more, most notably Joe Williams with The Count Basie Orchestra.

Memphis Slim lived out his days in Paris. As well as remaining a leading Blues concert attraction, he appeared, playing and sometimes acting, in films and on TV.

Late in his life the U.S. Senate appointed him Ambassador-At-Large of Good Will, France made him Commander of Arts and Letters and a year after his death he was posthumously inducted into The Blues Hall of Fame. He died in 1988 at the age of 72 in Paris and was buried in The Galilee Memorial Gardens in Memphis, Tennessee.

Memphis Slim was responsible for my first meeting with another bluesman in Paris, a man who went on to record for Big Bear Records. This is how I told the story of Willie Mabon in the book, “Don’t Worry ‘bout the Bear”.

Willie Mabon recorded the first Number One for Chess Records. In 1952 his “I Don’t Know” smashed its way to the top of the Billboard charts where it remained for eight weeks and a quarter century later was featured by The Blues Brothers. In between is the story of a major, but neglected, talent, that of Hollywood, Memphis-born pianist/singer Willie Mabon. A former US marine, by 1949 Willie was in Chicago, recording first for Apollo Records (‘I didn’t get paid nothing for that’) and then for Chess.

After “I Don’t Know” hit, Willie signed for a nationwide tour and then moved to New York to be managed by the legendary Joe Glaser, manager of Louis Armstrong. Willie had two more chart successes, the latter one the tongue-in-cheek “Poison Ivy”, later covered with huge success by The Coasters. His recording of the Willie Dixon classic, “Seventh Son”, was cited by Mose Allison as his major influence, but it didn’t hit and Willie was dropped by Chess. Chess Records, founded by Leonard Chess, born Lejzor Czyz in Poland, became a legendary force in the recording industry.

Chicago’s black blues musicians would refer to Chess as Cadillac Records in reference to Leonard’s habit of rewarding a big hit with a Cadillac. Willie Mabon seems to have fallen victim to a policy of three hits, one flop and you’re out – almost as unaccountable as dropping Tommy Tucker, a singer who had shared top billing with Ray Charles on coast to coast tours.

I first heard Willie Mabon in Paris playing in a small restaurant. I was staying with Mickey Baker in his swish Place de Bastille apartment when Peter Chatman – aka Memphis Slim – called to ask us to go over and listen to Mabon. He wasn’t singing, just playing background blues piano in a small restaurant to an audience of maybe 20 people who neither knew nor cared about who they were listening to. The piano was pushed against the wall, with Willie playing with his back to the audience.

Willie Mabon looked great, as he always did, and, most importantly, he was playing well. Before we left the restaurant that night, we had put together the recording schedule and spent the next day working on the repertoire, agreeing keys, tempos and arrangements, and deciding on the other musicians.

We recorded Willie’s Big Bear album, The Comeback, over several sessions in January, February and March the next year. Eleven of the songs were Mabon’s, the twelfth, “The Comeback”, the title song of the album, by Memphis Slim.

We had to fit the recording around Mabon’s burgeoning datesheet – Mickey had fixed a residency at Les Trois Mailletz – and we quickly put together a series of UK dates. Willie told me, ‘I just quit music completely for four years. I got disgusted, too many disappointments, so I went to truck driving. In ’69 I went back to playing and decided that later on I would get the chance to record more things.’  Things didn’t improve a lot, although he did record a single for Checker in 1969 and an album for Al Smith’s Blues on Blues label in 1972, but it wasn’t enough to sustain him and he kept on with the day job.

On September 24th 1972 Willie Mabon finally quit trucking and flew to Paris on a ticket bought for him by Memphis Slim. He arrived with little money and a lot of hope, and, of course, the invaluable support of Memphis Slim who knew just about everything and everyone to do with the blues on this side of the Atlantic.

The studio sessions rocked. Mickey featured on guitar, the bass player was American Dan Armstrong, famed as an innovative guitar maker and as a possible subject for the song “You’re So Vain” by his former lover Carly Simon. Pete York, founder member of The Spencer Davis Group and my first-call drummer, completed the line-up.

We added the charting group Arrival for the backing vocals and at the end of a take when one of them hit a particularly high note, I bounded out of the control room to congratulate the girl singer, Dyan Birch. ‘It wasn’t me,’ she replied, ‘it was Frank (Collins)!’

Willie Mabon was undoubtedly a class act. He wrote great songs, was a masterful piano player, inspired by his mentor Sunnyland Slim, and his laid back, cooler than cool vocal style has been much imitated, notably by Mose Allison who in turn passed the baton to Georgie Fame.

Willie remained in Paris, featuring at clubs and festivals, playing concerts and occasionally recording, until his death in 1985 following a long illness. He was 59 years old.

The third member of the Paris Blues Aristocracy was Mickey Baker, a good friend of Birmingham and an important part of the Big Bear Records story as touring and recording artist, music arranger and steadfast supporter.

More of McHouston “Mickey” Baker, again taken from “Don’t Worry ‘bout the Bear”, in this feature.