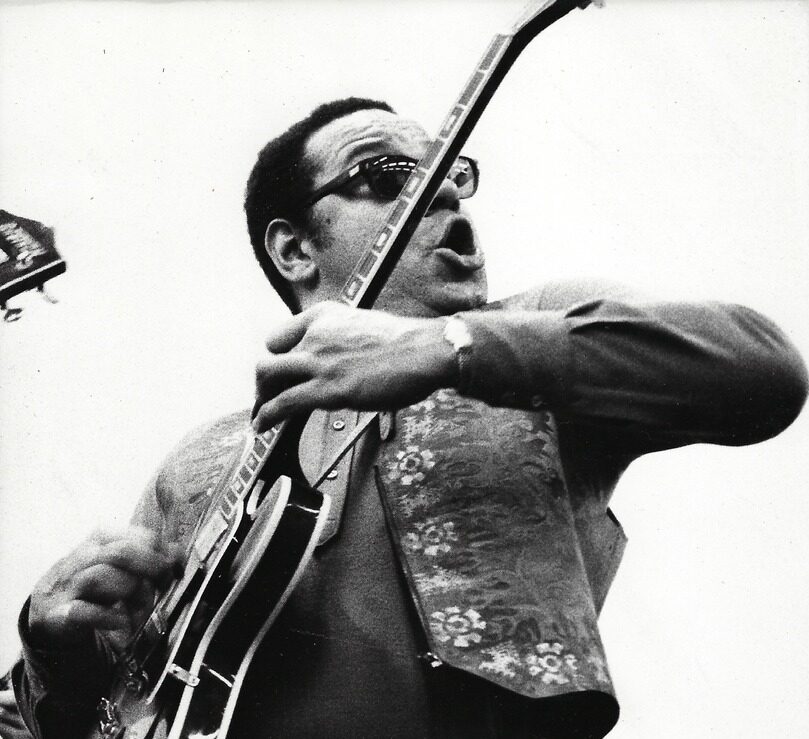 Following on from last week’s Part 1 of Paris Blues featuring Memphis Slim and Willie Mabon, we feature the third of those great American bluesmen who made Paris their home – Mickey Baker.

McHouston Baker, born in Louisville, Kentucky, in 1925, was no stranger to hard times. Known wherever Rhythm and Blues is spoken as Mickey Baker, he became one of the most influential of guitarists in the popular music of the 1950s before reinventing himself as a bluesman in the 1970s.

Mickey told me that he had long been intrigued by the reports of the success of Josephine Baker in Europe and how Paris had taken her to its heart – and, after all, she was black and a Baker like himself. Almost overnight, he gathered together all the money he could and, with his suitcase in one hand, guitar in the other, he boarded the S.S. France for Le Havre, knowing little of the country, to start a new life.

Taking the train to Paris, Mickey made his way to the offices of Barclay Records, having enquired which was the most important French record company – he wasn’t interested in doing business with anyone who had links to American labels. Mickey told me that he marched up to reception and asked to speak to Eddie Barclay.

He was asked to wait and offered a cup of coffee which mightily impressed him. He said that that was the moment that he became certain that he had made the right decision.

Many years later Barclay told me that his secretary came in and told him that there was an American to see him: his name was Mickey Baker and he said that he played guitar. Eddie said that he bounded out of his office, clasped Mickey with both arms, welcomed him to Paris and assured him that Disques Barclay was now his home.

Mickey was immediately put on a retainer, Eddie found him an apartment and the next phase of his career opened before him. He was to appear on French hit recordings by Johnny Hallyday and many others.

Mickey once told me that, whenever things were a little quiet on the gigging and recording front, he would rent a cottage on top of some French mountain and take off for a month, write another tutor book in his Complete Course in Jazz Guitar and pick up a thousand dollar advance.

In 1972 I was at the Nancy Jazz Festival with Doctor Ross, the Harmonica Boss, and more than a little excited to see that the venerated Mickey Baker was also to star at the festival. At that time I knew about the Mickey and Sylvia hit, the first time, I think, that anyone had ever recorded a distorted guitar sound, and, of course, I knew of his essential contribution to a string of Atlantic, Savoy and King records, and I couldn’t but wonder what sort of band Mickey Baker would be fronting.

The Doc and I arrived at the musicians’ hotel at around the time Mickey was due to start his set at an address on the edge of town. I saw the Doc to his room, dumped my luggage, grabbed a cab and gave the address of the show. A 20-minute ride later, I was staring at a supermarket and insisting to the cabbie that this was not the right place.

Mickey was playing a solo blues spot in the supermarket’s café, albeit to an audience of maybe 150 people. He was, by the way, absolutely stunning and I soon forgot about the unusual location.

Over the following days Mickey must have thought I was stalking him, popping up at breakfast, dinner and every gig he played. From the moment I heard him play the not-so-primitive (in Mickey’s hands) Make Your Bed Up, Mama, and Blues Fell this Morning, I knew that I had to record Mickey Baker for Big Bear Records.

Luckily he saw this as no bad thing. At the end of the Doctor Ross tour I visited Mickey in Paris and found him one of the most interesting people I ever met.

He was wildly amusing, musically fascinating, easily enraged at anything he saw as improper, particularly the exploitation of the poor and weak. His French wife, Monique, with whom he had a daughter, was the perfect partner for this at times explosive, at others hilarious, man. Time spent with Mickey was never boring.

As a child Mickey suffered from a slow eye. At the age of 15, he had presented himself at hospital, holding the 200 dollar fee and requested they remove his right eye. Outrageously, they did as requested.

At the time I knew him, as I recall, a French rule of the road required that main road traffic had to give way to that joining from the right. Driving us both to a gig in his peppy Renault 16, Mickey seemed to disregard this a couple of times when he cut up cars joining from the right until finally a car appeared directly in front of him, making him take sudden evasive action.

‘Where did he come from? Goddam French drivers!’ cursed Mickey. When I remarked that actually the offending car’s intentions had been clear from a distance away, he growled, ‘My goddam nose!’ It took a few seconds for me to realise what he meant and then I collapsed in laughter.

It was his right eye that had been surgically removed and the remaining eye couldn’t see over what, one had to admit, was an unusually protruding nose! From that moment I took on the role of passenger seat driver.

I’ve always been amazed that Mickey Baker is not a household name when you consider his immense contribution to popular music guitar styles. In the 1950s his was the archetypal electric guitar, heard on hundreds of New York rhythm and blues records which helped to turn a ghetto culture into the root of a youth-based popular music.

When I first knew him in France, he was really enjoying a journey of discovery, delving backwards into the blues. ‘Not just the B.B. King kinda thing, but Robert Johnson, Son House, the heavy things, these are the deep roots,’ said Mickey.

I hope that we properly captured Mickey’s extremely musical take on what is, essentially, a fairly primitive music on his Big Bear album, Take a Look Inside. Tony Cummings, feature writer with Black Music magazine, wrote, ‘In this quite extraordinary album, Baker plays acoustic bottleneck in the same expert manner as his elegant electric.

Here is a man who has fully absorbed the country blues; listen to his stunning intro to Make Your Bed Up, Mama, the pure sound of the Delta. Doesn’t New York, New York perfectly personify the backstreet life of the performers and isn’t Take a Look Inside with its charging gospelesque choir the very embodiment of joyous fervour? It is fitting that Mickey Baker, the legendary father of the modern Rhythm & Blues guitar, should lead the journey back to an earlier kind of musical truth.’

The year before we recorded the album I had Mickey with Lightnin’ Slim and Eddie ‘Guitar’ Burns booked into the 1972 Lanchester Arts Festival in Coventry as a support act for Chuck Berry. We had spent the day at my house talking about the upcoming show until the three of them got into singing dubious lyrics from their youth, taking it in turns to play Mickey’s acoustic.

The song that caused most hilarity was My Ding-a-Ling which had a particularly spicy lyric. That night, in the dressing room with Chuck, they were all fooling around, exchanging reminiscences, and again that song amused all four of them.

It would be good to see Chuck’s original set-list because my guess is he included it in his set as a direct result of these off-stage shenanigans. Whatever, a cleaned up version of My Ding-a-Ling, recorded live that night, became Chuck Berry’s only Number 1 on the Billboard Hot 100.

Mickey continued to work with Big Bear, playing concerts and festivals. He wrote some terrific arrangements for Eddie ‘Guitar’ Burns’ second album, Detroit Blackbottom, and led the band for Let the Good Times Roll by The Mighty Flea.

Stream Take A Look Inside Here