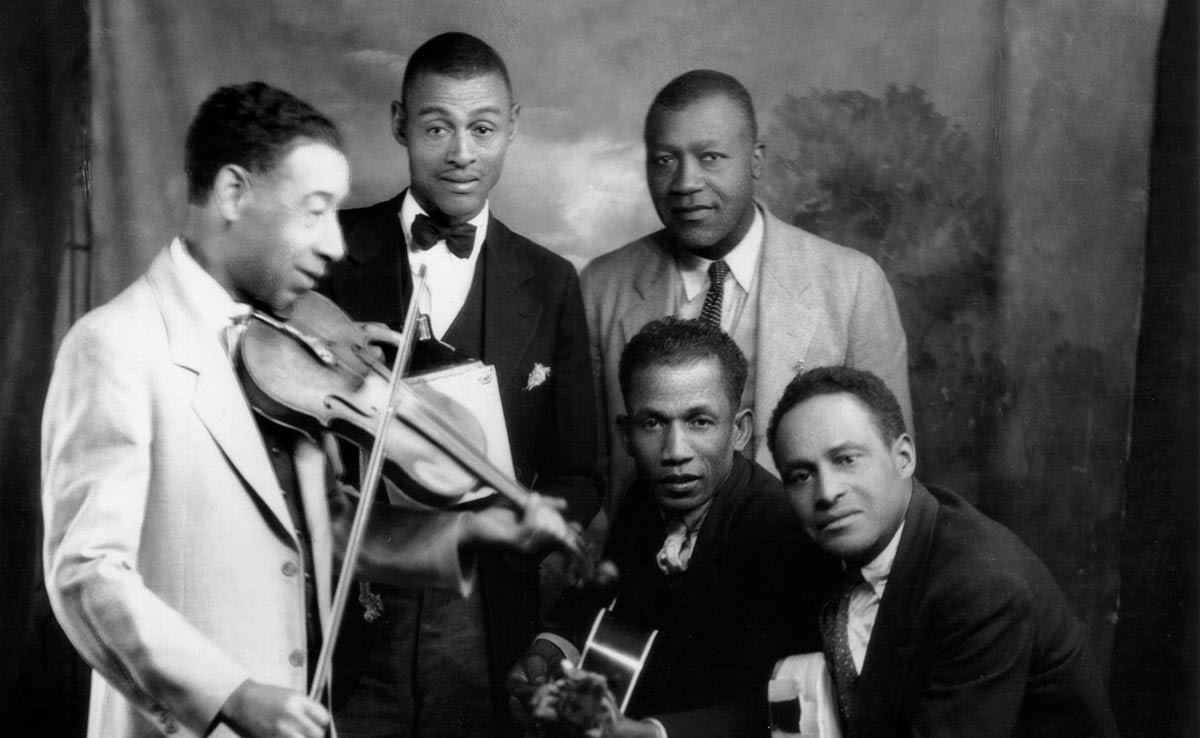 2021 seems to be shaping up to be a good year for those of us who are interested in those earliest recorded blues, with the release of seven CD sets, each set comprising of six CDs, in the Matchbox Bluesmaster series. The focus is on the blues, hokum and gospel music recorded between 1926 and 1934 and concentrated on the little-known and the almost totally unknown among the first blues performers to be recorded – and it’s fascinating stuff.

A lot of the music is quite primitive. Neither slick nor sophisticated, it’s the real thing, exactly as would have been heard when strolling down Beale Street in the late 1920s or early 1930s.

Disc 1: “The Complete Recordings in Chronological Order of Noah Lewis and Jed Davenport”

Noah Lewis’ Jugband features guitarist Sleepy John Estes, mandolin player Yank Rachel and jug blower Ham – for Hambone – Lewis for a stomping “Ticket Agent Blues” and “New Minglewood Blues” before there’s a personnel change with an unknown mandolin player replacing Rachel and a certain Mrs. Van Zula Carter Hunt taking care of the vocal on her “Selling the Jelly”, which sounds remarkably like her recording of the same song with The Carolina Peanut Boys, where she also plays guitar.

The Beale Street Rounders, featured Mississippi-born harmonica player Jed Davenport – just check out his pyrotechnics on “Beale Street Breakdown”, one of the ten tracks that feature both this band and his Beale Street Jug Band.

The other musicians here have not been identified other than Joe McCoy, though he is listed as Joe Williams, and it’s likely that Memphis Minnie was also on this session. His classic “How Long, How Long” recorded in The Peabody Hotel are included here as well as the splendid “I’m Sitting on Top of The World”, sung by Henry Too Tight Castle, originally recorded by Vocalion in Chicago at the same time as “Talkin’ ‘Bout Yo-Yo”.

A fine dose of romping and stomping Memphis Jug music, that includes Jed’s famous imitation of a piccolo and rare snapshots of his trumpet and tin whistle playing.

Texas Alexander was born Algar Alexander in the tiny community of Jewett in 1900. It is reported that his mother, Jenny Brooks “was rowdy, she was runnin’ about”, and in the absence of any further detail, we can only guess why the young Alger and brother Edell were placed in the care of his grandmother in the hamlet of Richards, Texas.

Alexander had a primitive, powerful voice that echoed the field hollers, work shouts and prison songs of the early 1900s. With regard to his prison songs, it could be said that he might well have brought some personal experience to the table.

It is reported variously that he was sentenced to six years in the state penitentiary for the murder of his wife, or alternatively, he could have been sentenced to a spell on a Prison Work Farm for singing lewd songs in public. Based on the explicit nature of many of his songs, the clever money is on the latter. Jazz musicians Joe King Oliver, Eddie Lang and Clarence Williams make an appearance on some tracks.

These sixteen tracks come from sessions in Chicago in 1928 and from 1938 in Dallas, all of them featuring Willard Ramblin’ Thomas singing and playing guitar. Thomas was born in Logansport, Louisiana in 1902, died in Memphis around 1945.

He most certainly was a Ramblin’ Man. He sings of enjoying Chicago so much that he stayed there for an entire week, whereas he didn’t find Dallas as accommodating as conveyed in his “Hard Dallas Blues” where he sang of being imprisoned for vagrancy. ‘Man, don’t never make Dallas your home’.

He was also inclined to complain about his girls, as in “Hard to Rule Woman Blues” where he sings, ‘I’ve got a girl, I wish I could keep her home at nights, she’s always going off on automobile rides’. Thomas cut a total of 18 sides for Paramount and Victor between 1920 and 1932, 16 of which are included here.

An interesting collection of pretty much unknown singers with all but one, Pearl Dixon (from Tennessee), either from or associated with Texas. The first five tracks feature a blues girl with attitude, Lillian Miller of whom almost nothing is known.

On the opener, “Kitchen Blues” she is accompanied by the tasteful piano-playing of 16-year-old Hersal Thomas, who died of food-poisoning shortly after the Chicago session. His elder brother, George W. Thomas takes over the piano duties on her remaining recordings, along with guitarist Charlie Hill which include “Dead Drunk Blues” which was later associated with Ma Rainey.

There are two songs credited to Hattie Hudson with Willie Tyson on piano and I wish there were more. Hattie’s real name was probably Burleson, and her singing is outstanding on two good songs, “Doggone My Good Luck Soul” and “Black Hand Blues”.

On the same day, December 6th 1927, Gertrude Perkins took one from Hattie for the defiant “No Easy Ride Blues” and “Gold Daddy Blues”. Country Blues singer and songwriter Pearl Dickson, born Somerville in 1903 only ever recorded four songs, two of which remain unissued.

Here we have “Twelve Pound Daddy” and “Little Rock Blues” recorded in Memphis in 1927 where she is accompanied by Mahlon or Maylon and Richard ‘Hackshaw’ Harney. The following year Mahlon was stabbed to death in a Juke Joint.

Laura Hendon was a big-voiced gospel singer who recorded for Columbia in 1928 in Dallas, accompanied by unknown piano, guitar and brass bass and for Brunswick the following year in Kansas City where she is backed by Bennie Moten on piano, Eddie Durham on guitar and Joe Page on double bass.

Laura was a spirited singer and rocked along nicely, and it’s a mystery that she wasn’t to record again. The finisher is Bobbie Cadillac with “Carbolic Acid Blues”, a well-sung with somewhat disturbing lyrics ‘she looked at me with burning eyes, throwed carbolic acid in my face’.

Singer and pianist Rufus and singer Ben Quillan were part of a family of ten from Gainesville, Georgia. As the Blue Harmony Boys, they are joined by singer James McCrary and an unknown guitarist for a set of good-natured, slick harmony, hokum blues.

Ben recalled that most of their songs were ‘kinda indecent for that day, but not for today. That’s about all they wanted from us was jumping little songs like “Tight Like That”, “It’s Dirty But Good”, “Keep It Clean”. We had a lot of fun, played a lot of house-parties, small dances.’

DeFord Bailey was best-known for his fifteen years with The Grand Ole Opry. He was born in Carthage, Carolina to a farming family who all played instruments and at the age of three he started to learn to play harmonica and mandolin.

He favoured his Marine Band harp and found fun in “imitating everything I heard – hens, foxes, hounds, turkeys, everything around me.” His train songs are remarkable, capturing in some detail the sounds of individual trains, “Pan American Blues” and “Dixie Flyer Blues”.

His “Alcoholic Blues”, recorded in 1927, was later popularised by Sonny Terry with Brownie McGhee. Bailey was a victim of polio as a child that stunted his growth and prevented him from taking normal jobs.

He decided to make music his living, teaming with Bob Tip Lee another small and crippled harmonica player and they performed together on the streets of Nashville. He later worked as an elevator operator where he played to his passengers.

When he quit that, he operated a shoeshine stand to provide for himself and his wife before going into a long retirement. He died at the age of 83 in 1982.

Almost nothing is known of D.H Bert Bilbro except that he was white and from the Piedmont region and his only recordings are those included in this set. This harmonica style is not dissimilar from that of DeFord Bailey and his terrific opener is also a train song “C. & N. W. Blues”.

Of the fine songs Bert recorded there are a couple with him singing and playing harmonica to guitar accompaniment on “Yes, Indeed I do” and “We’re Gonna Have a Good Time Tonight” which have a decidedly Swiss Alpine feel. A surprising ending to a surprising CD set.

You can listen to samples an order the complete set from the Saydisc Records website.