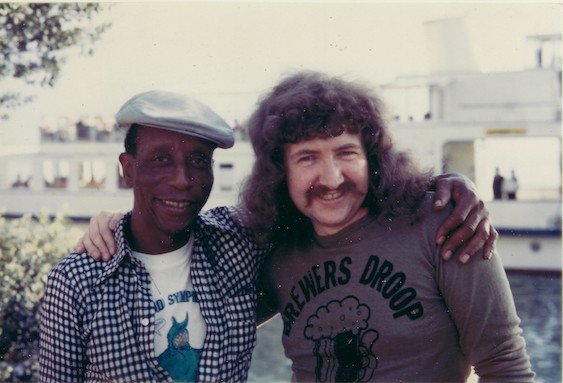 Considering the importance of the one man band in the Blues lexicon, it is remarkable how few of them ever achieved significant prominence.

The first of this rare and precious breed that I encountered, was possibly the most well-known, The Lone Cat from Jonesboro, Georgia, Jesse Fuller, composer of the timeless “San Francisco Bay Blues” who I featured in The Refectory of The College of Advanced Technology – now known as Aston University – back in the early 60s.

He took to this unfamiliar setting without so much as a blink, as if he had never done anything else – and then went back to driving the school bus. Sadly, as he told me, nobody back in Detroit believed the tales of his adventures – until they saw the American Blues Legends ’73 album of the tour, that is.

The following year, we arranged the first of half a dozen UK/European tours for The Flying Eagle, otherwise known as Doctor Ross, The Harmonica Boss. Born Charles Isaiah Ross in Tunica, Mississippi, given the soubriquet of Doctor because folk thought that the neat little case that housed his harmonicas resembled that carried by a doctor.

He was an early star of Sam Phillips’ Memphis-based Sun Records when his 45s were juke joint favourites in the mid -1950s. Convinced that he was being cheated out of his due royalties, he quit Sun and moved to Fortune Records in Detroit where he recorded his brilliant “Cat Squirrel” – later to be recorded by supergroup Cream, Jethro Tull, Blodwyn Pig and more.

He fired his band on the basis that he could play everything better himself – which he proceeded to do as a one-man band. He was an unmitigated success on his Big Bear tours, sometimes a delight to work with, at other times verging on the impossible – depending on the amount of whiskey consumed.

The latter appeared recently on the Facebook account of Al Gare, who for many a year was a star of King Pleasure & The Biscuit Boys as double bass player, Slap Happy.

He was born one of nine children in Bellville, Texas in 1932. Both parents died when he was a child and Bonner was raised by neighbours. He started playing guitar when he was twelve and kicked off his musical career when he was sixteen years old, winning first prize on disk jockey Trummie Cain’s weekly talent show at the Lincoln Theatre in Houston. As a result he landed a 15 minute radio slot sponsored by record retailer Henry Allas.

He married and had three children before his wife deserted him, leaving him to bring up his family single-handed.

In 1963 he had almost half his stomach surgically removed as a result of a large ulcer. While recovering, and severely affected by the civil rights riots and the assassination of John F Kennedy, he began writing poetry, much of which was published in The Houston Forward Times, as well as working days at RCA Records distribution in Houston.

When match fit, he resumed his recording career and went back on the road, featuring at The Ann Arbor Blues Festival and The Montreux Blues Festival and touring Europe with The American Folk Blues Festival and with Clifton Chenier and Magic Sam. Incredibly, this wonderful bluesman found himself unable to sustain himself by playing music and had no choice but to take a badly paid day job at a chicken processing plant in Houston.

His final performance was at the 1978 Juneteenth Festival in Houston at the Miller Outdoor Theatre. Some two weeks later, Juke Boy Bonner died of cirrhosis of the liver in his apartment.

Possibly the very first of the one man blues bands was singer, guitarist and harmonica player Daddy Stovepipe. Born Johnny Watson in Mobile, Alabama in 1867, he was, at various times, known as Jimmy Watson, Sunny Jim and Reverend Alfred Pitts.

Stovepipe first recorded in 1924 in Richmond, Indiana then three years later for Gennett Records in Birmingham, Alabama in a duo billed as Sunny Jim and Whistlin’ Joe.

Stovepipe was back in Chicago in 1931, but no longer a one-man band. He recorded for Vocalion with his wife, singer and jug player Mississippi Sarah, and again four years later, for Bluebird by which time they were living in Greenville, Mississippi.

Those recordings with Sarah are primitive but terrific, but sadly, in 1937 Sarah died and Stovepipe went back on the road, initially with Cajun groups and Mexican mariachi bands before returning to play the blues on the street corners of Chicago in 1948.

His last recordings were in 1960 at the tender age of 93 in Chicago, where he died three years later of bronchial pneumonia.

Nearly fifty years later, the nonprofit Killer Blues organised a fundraiser at The Howmet Playhouse in Whitehall, Michigan which enabled them to honour Daddy Stovepipe’s unmarked grave with a headstone.

Interestingly, there were two other near-namesakes of Stovepipe in the same era. Samuel Chambers Jones, born in 1890, also recorded as a one man blues band in 1924, using the name Stovepipe Number One while Thomas McKinley Peebles adopted the name Sweet Papa Stovepipe. He was born in 1897, died in 1985 and recorded “All Birds Look Like Chicken To Me” and “Mama’s Angel Child” in 1926.

Elmon Mickle was born in Keo, Arkansas in 1919. He recorded under his real name, also as Model T Slim and Driftin’ Slim.

He sang, played guitar and harmonica, working as a one man band until the early 1970s when ill health forced him to quit music. He recorded more than 20 sides, though some of them were with a band, and he died in 1977 in Los Angeles.

Lester, or possibly Leslie, Hill was a one man blues band, playing guitar, harmonica, drums and singing and working under a series of quaint names, The Be-Bop Boy, The Pepticon Boy and Chicago Sunny Boy, before settling on the name by which he is remembered today, Joe Hill Louis. Born in Raines, Tennessee in 1921, he won the nickname Joe Louis as a child following a fistfight with another kid.

He took to this unfamiliar setting without so much as a blink, as if he had never done anything else – and then went back to driving the school bus. Sadly, as he told me, nobody back in Detroit believed the tales of his adventures – until they saw the American Blues Legends ’73 album of the tour, that is. When he got to be 14 he left home to work with some rich family in Memphis and by the late 1930s he was working at The Peabody Hotel. Come the early 1940s he had left that behind and was working as a one man blues band.

Joe Hill Louis first recorded in 1949, this was for Columbia, the first of a string of labels to release his music – Modern, Checker, Meteor, Big Town – before, importantly, he recorded for Sam Philips. His 1950 waxing “Boogie In The Park” was a classic, not only because it was the only release on Philips Records, Sam’s early label before his Sun Records, but because many consider that Louis’ electric guitar playing was a precursor to heavy metal music, described by Anthony DeCurtis as “one of the loudest, most overdriven and distorted guitar stomps ever recorded…cranked high guitar while sitting and banging at a rudimentary drum kit”.

As well as his recordings for Sun under his own name, Louis also appeared as a backing musician for many of Sam’s other artists. He was the guitarist on the Rufus Thomas recording of “Bear Cat” – a response to Big Mama Thornton’s “Hound Dog” which not only hit number 3 on the R&B chart but was also the target for a spot of litigation for infringement of copyright.

Joe Hill Louis co-wrote “Tiger Man”, recorded by Elvis Presley, and in 1950 he took over the regular spot on Radio WDIA vacated by BB King – as The Pepticon Boy.

Joe Hill Louis died in August 1957 in John Gaston Hospital in Memphis from tetanus, contracted through a cut on his thumb which he sustained while working as an odd job man.

I am sure that there must have been more of those great characters who created, developed and perpetrated that great tradition of the Blues One Man Band and I would love to hear if any readers know of them.

In Britain of course, we delighted in Duster Bennett, who was a regular at the 1960s Henry’s Blueshouse and even now the flag is carried by the fascinating, wild and wacky Lewis Floyd Henry who captivated audiences at earlier Birmingham, Sandwell & Westside Jazz Festivals.

For your listening pleasure, we’ve compiled this week’s selections into a handy playlist: