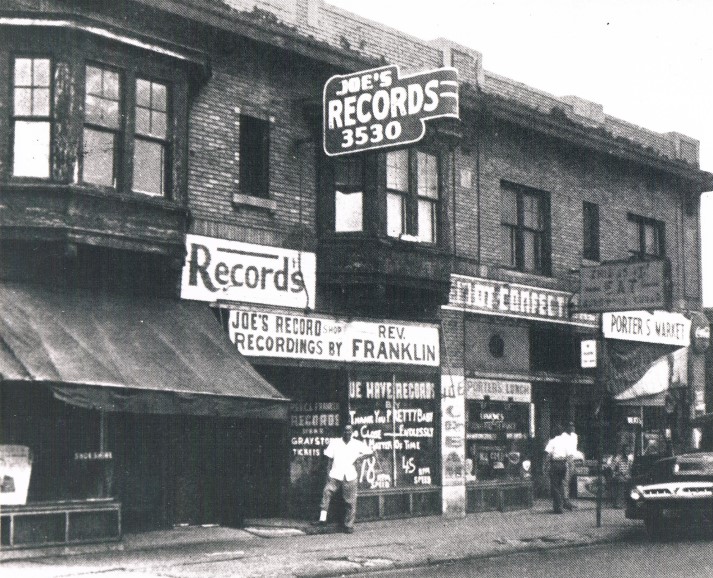 Black Bottom was a predominantly black neighbourhood in Detroit, Michigan. A lot of folk wrongly believe that it got its name from the African-American community that developed there in the 20th century, but the name was coined by early French settlers in recognition of the dark fertile soil found there.

By the early 1930s, The Black Bottom, along with the adjacent Paradise Valley, had become the hustling and bustling Detroit centre of black entertainment with nightclubs, theatres, blues and jazz bars, cabarets, restaurants and gambling joints, along with a high level of poverty and crime.

It had all started with cars. The prospect of paid employment inspired thousands of African Americans to leave the southern states and join the great migration north. Arriving in Detroit, they were confined by racially discriminatory housing to neighbourhoods such as the Lower East Side’s Hastings and St. Antoine Streets, names which were to become legends in the Blues lexicon.

Joe Von Battle operated the famous record store at 3530 Hastings that carried his name. Joe also recorded scores of bluesmen in his technically limited and makeshift studio at the back of his store, including John Lee Hooker, Jackie Wilson and a fourteen year old Aretha Franklin, while the majestic World Heavyweight Boxing Champion, Joe Louis, part-owned The Brown Bomber Chicken Shack on Hastings.

Artists such as Billie Holiday, Count Basie, Sam Cooke, Ella Fitzgerald and Duke Ellington appeared regularly in Paradise Valley while the Reverend C.L. Franklin, father of Aretha, established his New Bethel Baptist Church on Hastings. “When I got to Detroit, Hastings was the best street in town,” opined Florida-born Arthur Phelps, better known as Blind Blake and sometimes as Blind Arthur.

The undisputed Boss of Detroit Blues was John Lee Hooker, who came from the fertile Blues territory of Clarksdale, Mississippi. His former sidemen Eddie Guitar Burns and the wildly eccentric one man blues band Dr. Ross both came from that state, from Belzoni and Tunica respectively.

While John Lee Hooker was certainly the biggest name to emerge from the city, it would only be right to remember Big Maceo Merriweather, who was considered to be one of the greatest blues piano players of the 1940s. His tough, two-handed style influenced most blues pianists in the era following World War II, including Otis Spann, Johnny Jones and Eddie Boyd. Maceo’s biggest hit was “Worried Life Blues”, now a standard in the repertoire of many blues piano players.

Birmingham’s Big Bear Records developed a productive relationship with the blues fraternity of Detroit. The first Big Bear Eurotour was with singer, harmonica player and guitarist Eddie Burns who we toured several times during the 1970s, recording two feature albums “Bottle Up and Go” and “Detroit Blackbottom”. He also toured and recorded with our American Blues Legends ’75 and appeared once at Henry’s Blueshouse with Lightnin’ Slim and Whispering Smith backed by The Shuffling Hungarians who were, in fact, an augmented version of Moseley’s Tea & Symphony.

Doctor Ross The Harmonica Boss was another Big Bear regular, recording the album “Live at Montreux”, where one side of the vinyl album featured the only recording where he played with other musicians, in this case the Muddy Waters rhythm section of Lafayette Leake, Louis and David Myers and Freddy Below. He also recorded a solo studio album “Doctor Ross, The Harmonica Boss” as well as touring and recording as part of American Blues Legends ’74 and appearing on several Big Bear compilation albums, including “Don’t Worry ‘Bout The Bear”.

Other Hastings Street regulars who toured and recorded with Big Bear included the terrific pianist and singer Boogie Woogie Red, originally from Rayville, Louisiana, guitarist and singer Baby Boy Warren from Lake Providence, Louisiana and the enigmatic Washboard Willie who was born in Bullock County, Alabama in 1906 or in Columbus, Georgia in 1909. There is some confusion over this, but not over his real name which is William Paden Hensley.

The influence of the blues of Black Bottom on the development of an entire generation of Motown soul musicians is clear, but sadly the Hastings area was demolished in the 1960s and all that remains today is a Michigan Historical Site marker on what was the intersection of St. Antoine and Adams Avenue.

A combination of earlier race riots where US troops were deployed, politics, racial tension and inner-city housing issues provided the excuse to completely clear the area for redevelopment, destroying what had been one of American’s most important centres of black urban culture.

Join us on a musical journey, straight back to Black Bottom, Detroit….

An early arrival was Florida-born Arthur Phelps, sometimes called Blind Arthur but best known as ragtime blues guitar legend Blind Blake. He said ‘When I got to Detroit, Hastings was the best street in town”

Aaron Willis, raised solely by his mother in Greensboro, Alabama, said that he had no real interest in music until he saw Sonny Boy Williamson II, and was spellbound. Known as Little Sonny, the harmonica player and singer relocated to Detroit in 1953, played in the band of Washboard Willie in The Good Times Bar before going on to lead his own band, appear with John Lee Hooker and to record prolifically.

Big Bear Records enjoyed a long relationship with the Blues fraternity of Detroit, with three of Hastings’ finest appearing on our America Blues Legend ’73 UK/European tour and album. Vernon Harris, aka Boogie Woogie Red, was born in Rayville, Louisiana, moving to Detroit at the age of four.

He matured playing piano and singing in the clubs on Hastings, went on to work alongside John Lee Hooker, Sonny Boy Williamson I and Baby Boy Warren. His mischievous sense of humour is apparent on his Big Bear recording of “Viper Song”.

Doctor Ross ‘The Harmonica Boss’, the extremely eccentric one man band from Tunica, Mississippi wrote and made the original recording of “Cat Squirrel” which was later covered by the supergroup, Cream. When we found him, he was working at General Motors in Flint, Michigan, sweeping up metal scraps. He became a regular Big Bear touring bluesman and recorded two albums. Here’s his “Don’t Worry ‘Bout The Bear”.

One of the most important piano players of the 1940s was Big Maceo Merriweather whose 1941 recording of “Worried Life Blues” became a blues hit and influenced practically every postwar blues pianist of note.

He first heard the blues in field hollers back in Alabama, but Blind Blake became his major influence. He served in the U.S. Army in World War II and when discharged joined his mother in Detroit, where he worked daytimes at the Ford Rouge Plant, played guitar, harmonica and sang on Hastings in the evenings, until he joined John Lee Hooker where he stayed for 13 years. Eddie Kirkland with “Write My Baby A Letter”

Eddie Guitar Burns, also known as Big Daddy, Little Eddie and Big Ed was born into a sharecropping family in Belzoni, Mississippi moving to Detroit in 1948 at the age of 20.Eddie sang the Blues, played harmonica and guitar and became a regular at the house parties, nightclubs, and beer joints on Black Bottom, working as a mechanic by day.

He was the first American Bluesmen to be toured and recorded by Big Bear Records, with the albums “Bottle Up And Go” and “Detroit Blackbottom”. Here’s “Do It If You Wanna” with Brummie musicians Roger Hill, Bob Wilson and Pete York. The pianist was Bob Hall.

We found Washboard Willie driving a school bus by day and leading his Detroit band The Fantabulous Super Suds of Rhythm by night. William Paden Hensley was born in Bullock County, Alabama, moved to Detroit where he saw Eddie Guitar Burns playing a club on Hastings. He sat in and was offered a residency which lasted for three years. He came to UK and Europe touring and recording with American Blues Legends 73 – “I Feel So Fine”.

Guitarist and singer Bobo Jenkins was born in Forkland, Alabama, left home at 12 to move to Memphis where he married at the age of 14, the first of his 10 marriages. Following service in the U.S. Army he settled in Detroit to work at the Packard factory, then managed a garage before working for Chrysler where he spent 27 years.

He and John Lee Hooker wrote and recorded “Democrat Blues” in 1954 for Chess Records, expressing his unease about Eisenhower becoming the first Republican President in almost 20 years. Bobo also recorded for Boxer Records before building his own recording studio and setting up Big Star Records.

He organised the first Detroit Blues Festival in 1972 and, despite a whole bunch of correspondence, never quite made it onto a Big Bear Records tour.

William Edward John, whose adopted professional name of Little Willie John could be seen as somewhat unfortunate, was born in Cullendale, Arkansas, and came to Detroit at the age of four with his jobseeking father. He signed to King Records and became a regular on the record charts with the songs “All Around The World”, “Need Your Love So Bad”, “ Talk To Me Talk To Me”, “Leave My Kitten Alone”, “Sleep”, and most importantly, the million-seller “Fever”, later to be recorded by Peggy Lee.

Little Willie John died while serving a sentence for Manslaughter at Walla Walla Penitentiary. He was 30 years old.

What better way to finish off a visit to the Detroit Black Bottom than another recording by the great John Lee Hooker? “Boogie Chillun’”