When The Wolf Met The Bear 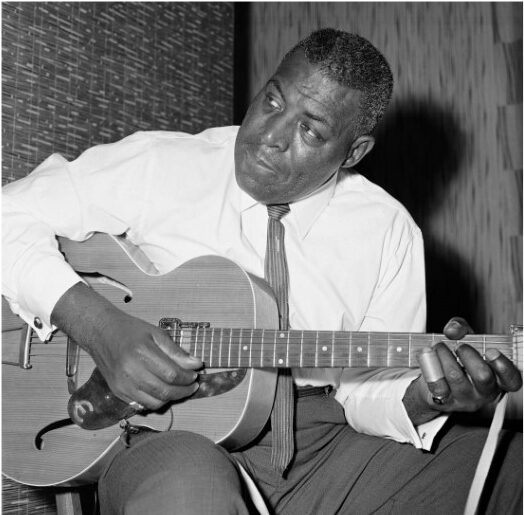 June the 10th marks the 111th anniversary of an undisputed great of Chicago Blues: Howlin’ Wolf. Back when he played Birmingham Town Hall in 1964, Jim Simpson was lucky enough to meet and photograph the man. Here’s what he remembers:

After I exhausted Wolf’s patience when it came to being photographed, I hung around, we took a taste and recorded our conversation.  He told me: “The Blues comes from the Delta country, farming people. We got more soul than the other people, because other people play progressive music, classical music, but we play jazz music, with feelings, something to express you know.”

“It comes from the heart. A lot of people play music from the head, they think, you know. Regardless of what sort of music it is, you want it to be pleasing to your ears.”

“I live in Chicago now. I got a home there. I paid $23,000 dollars for it. I got a farm too, and a hotel. I’m playing a few blues, I’m not starving. I just like to play my guitar and I like to go places and play for people. I don’t have to, but I love it, because I like the feeling of the music. I’m not a man for this sweet stuff, because I don’t understand it see.”

I asked who he played with in Chicago. “You mean who plays with me” was the response. “I’m the star, they play with me, I’m the man that do the playing, I do the hiring. I got a nightclub, me and a man they call Steve – he’s from Sweden.”

“We got a stock in there worth about $14,000. Whiskey, whiskey all around. Dancehall in the back, whiskey in the front. You can eat and drink in the front, but you go round the back for your refreshments – you know, dancing and jumping.”

“I am the Wolf. The front man. Everyone has to come by me. I pay and I fire; if you don’t do as I say, you’ve got to go. I love my music and I like for it to be played right. I likes to have a good sound and make it pleasing to people’s ears. If you want soul, I got that”

Not exactly the response I hoped for, and I realised that he wasn’t going to give any other blues musicians any sort of namecheck. His words look a lot tougher written down than they sounded when he delivered them. In fact, he was a very kind and gentle man with an abundance of charm.

That is, until he felt he was being challenged. Wolf continued: “everywhere you go in the United States, you can find great musicians and greater musicians that play the soul. Not like the young people today, they put a lot of that ja-ja-ja-ja into their music, you know what I mean? “

“That’s for the bobbysoxers, the little people, they like that sort of music because they ain’t got nothing to worry about but jump. You see the grown up people, they want some soul, something they can sit down and think over.”

One of Jim’s photos from that encounter is now available as a t-shirt, exclusively available from Henry’s Blues Emporium: