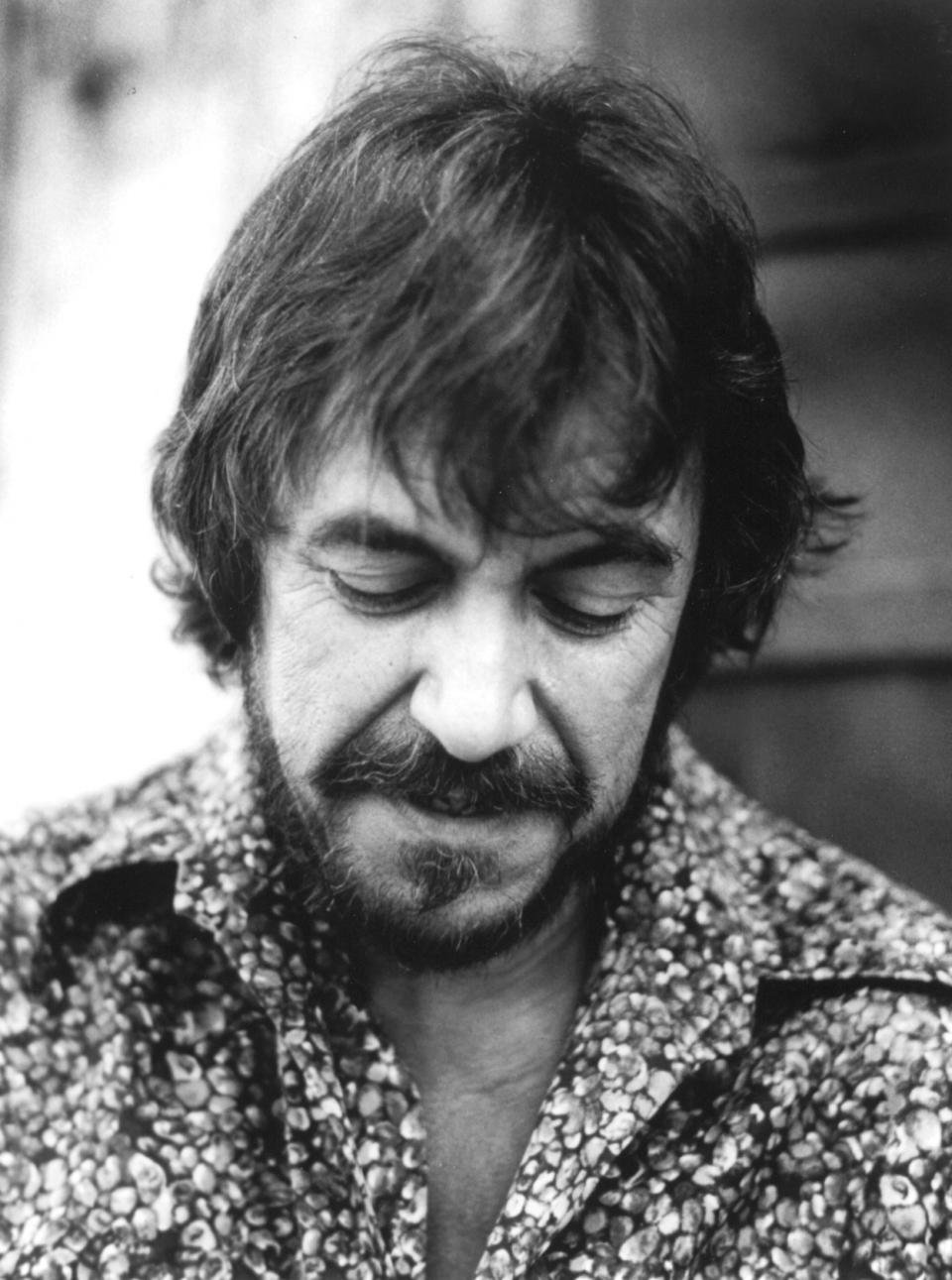 I will never understand why Hurricane Bobby Charles is not a household name in Blues and Rock & Roll. Admittedly, he never seemed to seek the limelight, which I suppose is putting it mildly for the at-times-reclusive songwriting genius.

He was never schooled in music, he didn’t play any instrument and said that he never planned a song; they just came into his head unbidden.

When he was 15, Bobby heard Fats Domino who instantly became his hero – within a few years Bobby had written the song “Before I Grow too Old” with Fats firmly in mind. Fats recorded the song which was released on Imperial in April 1960.

When The Fat Man was on tour and visited Lafayette, Louisiana, he invited Bobby to his dressing room. Bobby sang him a song he had written with Fats in mind, but the great man told Bobby that it was good, but not good enough. Fats told the young man to go home, write more songs, then come up to his house in New Orleans and sing them to him. Bobby replied, “How am I going to get there? I haven’t got a car.” “Then walk,” said Fats Domino, which instantly triggered something in Bobby’s mind, so he went home that night and within 15 minutes had written the classic “Walking To New Orleans”.

This time there was no hesitation where Fats was concerned. He took his band straight into The Cossimo Natassa studio on Rampart with producer Dave Bartholomew and cut the title for Imperial.

For the first time, Bartholomew put a string section on a Fats Domino recording. The string parts were scribbled down in 10 minutes by trombonist/arranger Milton Bush who figured that a dollar a minute was a good rate so he billed Bartholomew for ten dollars.

The single sold over 2 million units, charted at #2 on the Rhythm & Blues chart, at #6 on the pop chart and the song was subsequently recorded by Neil Young, Buckwheat Zydeco and many others including Bobby Charles himself.

Robert Charles Guidry was a Cajun, born in 1938 in Abbeville, Louisiana, who grew up listening to Cajun music and the country and western of the likes of Hank Williams. As Bobby Charles he helped pioneer the style, South Louisiana Swamp Pop. He was already singing and leading the Cajun and country band, The Cardinals, in Abbeville, deep in the Louisiana swamps.

When he was 15, leaving a roadside café, he called to his friends, “Later, Alligator”, to which a stranger responded, “In a while, crocodile.” Bobby immediately went over to the man and asked, “What did you say?”

Something clicked in Bobby’s mind, he went home and that night wrote “Later Alligator”. He took the song to Fats Domino who turned it down with, “I ain’t gonna sing no song ‘bout alligators.”

A travelling bluesman heard Bobby sing the song, took him straightway to a corner store payphone, called Leonard Chess in Chicago and had Bobby sing the song, unaccompanied, down the line. No hesitation! Leonard offered him a Chess Records deal on the phone and arranged for the youngster to fly into Chicago.

Leonard waited with an attractive white girl in the Arrivals Hall at the airport until only Bobby remained. “You can’t be Bobby Charles, you’re white,” was his speech of welcome. Bobby told Alex Rawls, “He dropped me and the girl off at a motel, gave me 200 bucks and said to have a good time. That’s the way it was. They weren’t going to bring a black girl for a black guy.”

The resultant 1955 single, “Later Alligator” on Chess Records did nicely enough for Bobby and the record company and he stayed with Chess until 1958. The song, with the title adjusted to “See You Later, Alligator”, did somewhat better with the 1956 cover version by Bill Haley and the Comets on Decca.

Its release later that year clocked up one of that year’s biggest sellers, peaking at #6 on both Billboard and Cashbox charts. At this, Bobby took to carrying a cane with a brass alligator on the grip.

In 1961, Bobby wrote another huge hit “(I Don’t Know Why I Love You) But I Do” for Clarence “Frogman” Henry, used in 1994 on the soundtrack for the acclaimed film, “Forrest Gump”.

It had been arranged for Bobby Charles to appear on a Chess Records package tour on the Chitlin’ Circuit headlined by Chuck Berry, Little Richard, The Platters and Frankie Lymon & The Teenagers. Appearing in black clubs, staying at black hotels, he found himself turned away from white restaurants that saw him getting off the musicians’ bus. “I thought that I was going to get hung for trying to buy 50 hamburgers,” he said.

After a few tours, he came off the road and worked on promotions for Chess, and remembered once, promoting an Etta James record in a Southern City, being asked by a radio station manager, “Hey Man, want to come to a hanging? They’re going to hang this black dude.” This experience, along with various rip-offs and a jealous wife who didn’t like him leaving home, led to him returning to Abbeville, recording for Imperial and gigging sporadically, but he would admit that he was part of the problem and that he didn’t really enjoy touring.

When the inevitable happened and he and his wife parted, he found himself in Nashville, where he got busted for drugs and did a runner to escape the law, finding himself in upstate New York, liking the name “Woodstock”, but knowing nothing about the place and moving in next door to Paul Butterfield.

Unsurprisingly, he came to the attention of Bob Dylan’s manager, Albert Grossman, and befriended Rick Danko of The Band. He was managed by Grossman for a while and wrote and recorded “Small Town Talk” and made the 1972 album, “Bobby Charles”, both with Rick Danko. In 1976 he appeared, apparently somewhat reluctantly, in “The Last Waltz”, the final performance of The Band. He sang “Down South in New Orleans” with Dr. John and The Band, which appears on the album, but not in the final Martin Scorsese cut of the film, though he can be seen onstage for the final song, “The Weight”. Still haunted by the knowledge that the Nashville police files on him were still open, he seemed to have spent time in Arizona, California and Tennessee before returning home to Abbeville in the 1980s.

He recorded his album “Clearwater” in 1987 on his own Rice ‘n’ Gravy label, recorded his song “Walking To New Orleans”, this time with his hero, Fats Domino, and was regularly visited by his friends, Bob Dylan, Neil Young, Willie Nelson, James Taylor and Dr. John. In 1994 he recorded his “Wish You Were here Right Now” album.

The private life of Bobby Charles was just as chaotic as his life in music. The drug bust that so depressed him, the broken marriage, being cheated out of royalties are just a part of it.

In 1996 his home was totally destroyed by fire, so he moved out to Holly Beach, a town of some 300 residents on the Gulf of Mexico, but fate hadn’t yet done with him. In 2005 Hurricane Rita swept away his house, together with much of the rest of Holly Beach, so he moved back to Abbeville and set up home in a two-bed trailer. In Abbeville he would hold court daily in his unofficial office, Shucks Seafood Restaurant, eating oysters and drinking Grey Goose Martinis.

In his later years, Bobby did not enjoy the best of health. He had a bout of cancer and damaged his back in a fall, but the need to write songs, record and even accept the odd gig survived. Sadly, although the will was there, the body often couldn’t make it.

He agreed to appear at The Ponderosa Stomp and to nobody’s surprise had to cancel at short notice. Similarly with The New Orleans Jazz and Heritage Festival where he was set to appear with a band led by guitarist Sonny Landreth featuring Dr. John and Marcia Ball. Bobby Charles collapsed in his Abbeville home and died on January 14, 2010 aged 71.

Quite how such a prolific writer of great songs managed to elude fame is something of a mystery. Conversely, he was always well-known to, and respected by, music insiders, Rick Danko, Dr John, Willie Nelson, Allen Toussaint, Bob Dylan, Fats Domino and many more. Dr. John said, “Dat Muddafucka can write, he just couldn’t go wrong.”

There’s no denying that he was reclusive at heart, but he was never short of another artist who wanted to record his songs. Bob Dylan recorded his “He’s Got All The Whiskey”, Muddy Waters did “Why Are People Like That”, and dozens of singers including Joe Cocker, Ray Charles, Delbert McClinton, Etta James, Johnny Adams, Rita Coolidge, Clarence Frogman Henry all recorded Bobby’s “The Jealous Kind”.

Not too bad for a singer who couldn’t read or write music or play a musical instrument. His way of creating a song was unusual in the extreme. He always claimed that a song would just come to mind, usually triggered by things around him, and that he would complete it in 10 or 15 minutes. Then he would simply record it, wherever he was. Typically he would often use a payphone in a convenience store, call his home, and record it on his answering machine.

Bobby summed up his career as follows in conversation with former New Orleans Times-Picayune writer Keith Spera, who is an all-round good guy and a pal of Big Bear artists Tipitina: “I never wanted to be a star. I’ve got enough problems, I promise you. If I could make it just writing, I’d be happy. Thank God I’ve been lucky enough to have a lot of people do my songs.”