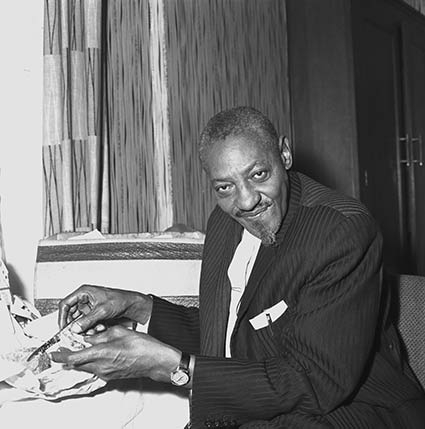 In the Blues world, the odd incident of larceny is not unknown. Poaching another bandleader’s sideman is run-of-the mill, and there’s many a case of stealing – or should that be borrowing? – the odd lick or, just as often, the entire song from another musician.

However, it’s a bit much when someone goes out and nicks another bluesman’s name, especially when the original is still active, performing, recording and still seeking work.

Sonny Boy Williamson, was born John Lee Williamson in 1914 in Jackson, Tennessee. He taught himself to play harmonica as a child, left home in his teens to travel with Yank Rachell and Sleepy John Estes, working juke joints, taverns, picnics and street corners.

In his short life Sonny Boy became one of the most influential and best loved harmonica players of all time. He was the first truly virtuoso harp player, considered by many to have shaped the course of classic Chicago Blues of the 1940s.

Sonny Boy was cut down in his prime when he was attacked as he left The Plantation Club in June 1948, dying of a fractured skull. He was 34 years old.

One of many children, he assumed the name of his stepfather, Jim Miller, calling himself Aleck Miller of which he soon tired and took the name of Rice Miller, the name with which the Blues World is familiar.

He taught himself to play harmonica at the age of five and left home to hobo throughout the South, working as an itinerant street musician calling himself Little Boy Blue.

Come 1941, he was working the streets of Helena, Arkansas with Robert Junior Lockwood when he got his big break in the form of an invitation to feature with Lockwood on the Radio KFFA King Biscuit Time midday blues show, sponsored by The King Biscuit Flour Company.

It was at this point that he decided to simply take the name of Sonny Boy Williamson, hoping to cash in on the reputation of the actual Sonny Boy who had been on the road since the age of 15, was still extremely active and had been steadily building an enviable reputation  working with the likes of Muddy Waters, Big Joe Williams, Big Bill Broonzy and the like. Sonny Boy Williamson #1, as he came to be referred to, was active recording for Bluebird Records from 1938 to 1945, Victor Records in 1945 and Columbia, with Big Joe Williams, in 1947.

How Rice Miller, generally known to the Blues world as Sonny Boy Williamson #2, thought he could get away with it is beyond imagination, but he did, and any furore must have subsided after Sonny Boy #1 was murdered.

It’s worth mentioning, that at various points in his career Sonny Boy #2 also used the names Willie Williamson, Willie Williams and Willie Miller, the last being the name of his brother.

The less pleasant aspects of Sonny Boy #2 are legend. He was an eccentric, difficult man to work with, he lied easily, was a con man, he drank too much and was a lean, mean, hot-headed six footer who rarely turned away from a fight.

But that musn’t detract from his immense ability. He was a swaggering dynamic performer, a terrific showman, wrote and recorded great songs including Blues standards “Nine Below Zero” and “Eyesight To The Blind”. He cut some great sides for Trumpet Records in Jacksonville, Mississippi and for Checker in Chicago with the likes of Otis Spann, Lafayette Leake, Willie Dixon and Freddy Below.

He became popular this side of the Atlantic through his appearances on the 1964 and 1965 American Folk Blues Festival tours and spent time in England performing and recording with The Animals and The Yardbirds including Eric Clapton.

For a while his UK backing band was The Spencer Davis Group which meant he briefly relocated to Birmingham where I remember seeing him at the bar of The Elbow Room. I got to photograph him on three occasions and I must admit he made a great subject, but was not the easiest of men to converse with.

He died in 1965, insisting until the end that he was the original Sonny Boy Williamson.

He was inducted into The Blues Foundation Hall of Fame in 1980.