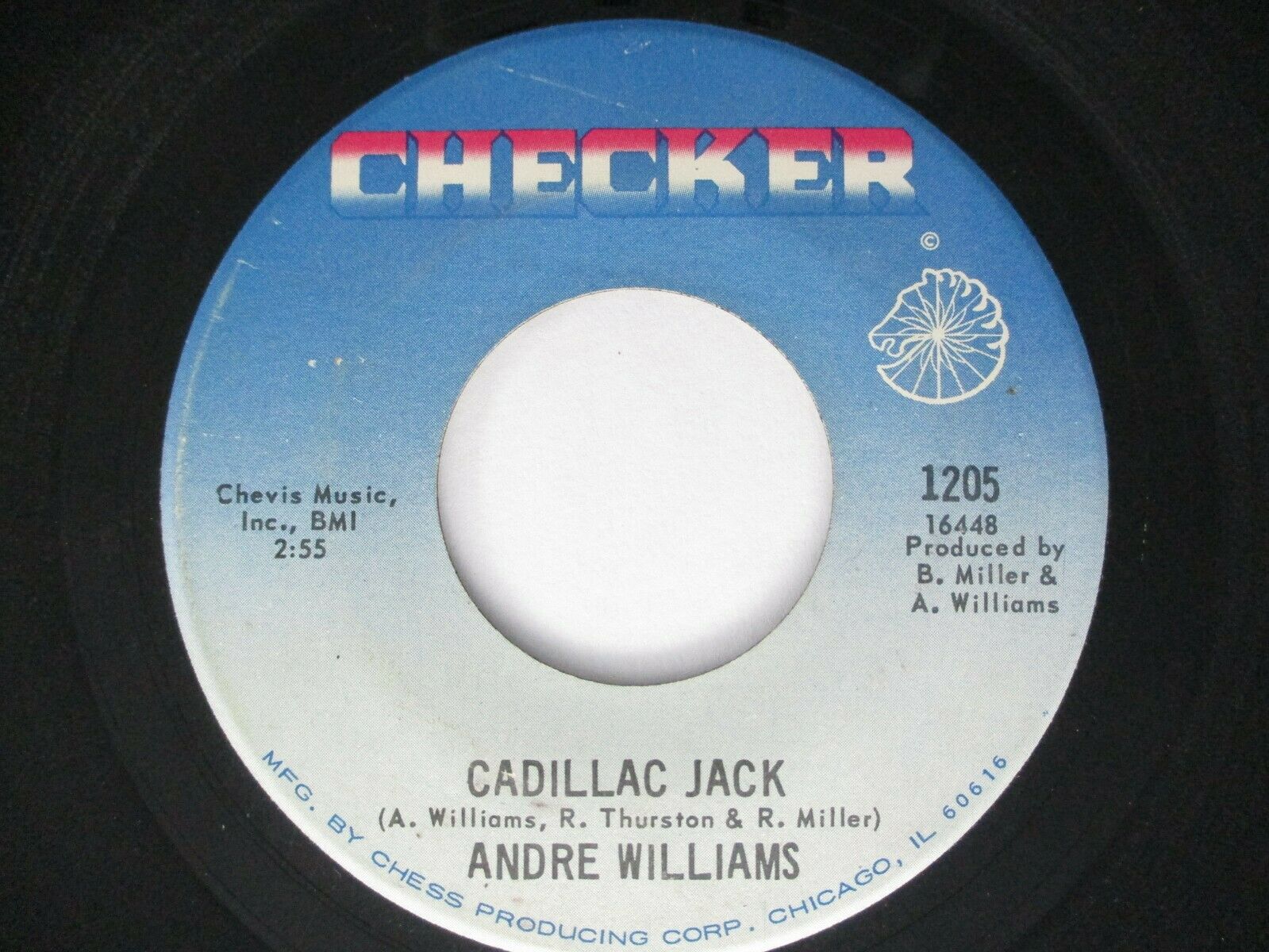 Sometime in the early 1970s I received a seven inch single along with a note from Andre Williams in Chicago who until that moment I had never heard of. The single, on the Chess subsidiary label Checker Records, was Andre with his “Cadillac Jack” song.

It was terrific, quickly became one of my most played, and still is. It’s cleverly-written, sort of speak-sung in Andre’s blues-soaked and growling guttural, and tells a fine story.

Andre’s note said that the word on the street was that Big Bear was fixing tours through Europe for some of the blues guys and that he might find the time to be part of that “if the money was right”.

Sadly, Andre’s idea of “right” and the realistic economy of the venture weren’t on the same planet. I dug out what recordings of his that I could locate and did my best to keep in contact, but he lost all interest when he realised that I wasn’t the philanthropic blues playboy he had hoped for.

I learned later from some of the blues guys that came on tour, that at that time his fortunes were at their lowest ebb, he was panhandling and occasionally homeless and his drug and alcohol dependency were getting the better of him.

Fortuitously, that was to change dramatically in February 1996, when Punk Blues/Garage Rock band Jon Spencer Blues Explosion came to Chicago to record at Electrical Studio and were told that Andre Williams was playing in some local bar, just around the corner. Spencer had long been an admirer of Andre Williams recordings and until that point had assumed that he was no longer active – or even worse. Jon wasted no time in getting to meet him and persuade him to join their session where Andre recorded the vocal on “Lap Dance”. It’s worth noting that the influential Jon Spencer Blues Explosion had form when it came to The Blues, notably touring and recording the album “A Ass Pocket of Whiskey” with Mississippi Hill Country Blues star R.L. Burnside – another of Jon Spencer’s idols – at Lunati Farms in Holly Springs.

Andre Williams had no idea, until being rediscovered by Jon Spencer, that he was held in such esteem by punk and garage bands, who regarded him as an important influence. But it doesn’t end there, Andre Williams is regarded by many as The Godfather of Rap, many say that Andre was the first Rap artist – though personally I have always considered the 1946 Phil Harris recording of “The Darktown Poker Club” to be where Rap began.

Zephire Andre Williams was born in 1936 in Bessemer, Alabama to Tom and Fannie Williams. The family moved north to live in a housing project in Chicago when Andre was a child. When he was six his mother died and Andre was returned to the South, where he was brought up by a succession of “Aunties”.

Some ten years later he rejoined his father in Chicago and soon enlisted in the U.S. Navy, although he was under age. It did not take the authorities too long to discover the scam and discharge him.

In the early 1950s The Motor City was booming, so Detroit was where “the sly and smart” youngster headed. He entered and won a Talent Competition which landed him a recording contract with Fortune Records, operated by Jack and Devora Brown and located at the back of a barber shop.

He became the singer with the Five Dollars and recorded a series of his invariably raunchy and greasy 45s before hitting The Billboard R & B chart with “Bacon Fat”. That was Andre’s first hit, reaching number 9.

He developed his unique vocal style, often humorous and invariably salacious in the belief that he could never match the pure vocal style of such guys as Clyde McPhatter or Nolan Strong. “So I came up with that spoken thing”, he said. His recordings included the extremely funny and equally dodgy “Jail Bait”, which certainly got no radio play, and the droll “Pass The Biscuits Please” which didn’t actually refer to any biscuits. “He sang of the joys of poultry, pork, prepubescent flesh and being The Only Black Man in South Dakota” commented journalist and broadcaster James Marshall.

A chance encounter with Berry Gordy while both men were having their hair cut, resulted in Andre leaving Forturne to join Tamla Motown, songwriting and developing artists. That’s how he came to co-write “Thank You For Loving Me”, the 13 year old Stevie Wonder’s first recording, as well as working with such acts as The Temptations and The Contours.

Claiming that Gordy was hard to work with, Andre moved on and concentrated on his songwriting with significant success including the co-written “Shake A Tail Feather”, a 1963 hit for The Five Du-Tones, later for Ike & Tina Turner, then James and Bobby Purify and most importantly for Ray Charles, which featured in that greatest of all movies, “The Blues Brothers”. In 1988 the original Five Du-Tones version was featured in the movie “Hairspray”.

From the mid-60s Andre was writing and producing prolifically with Mary Wells, Funkadelic, Parliament – even the fabulous Bobby Blue Bland. In 1968 Williams signed to Chess Records in Chicago who released a string of his hits including “Humpin’, Bumpin’ and Thumpin’ ” and for me his most important side “Cadillac Jack”, which reached 46 on the Billboard R & B chart and was to be his final charting single.

Then the call came from Ike Turner in Los Angeles, asking Andre to come to the coast and work with him. Ike and Tina were still including Andre’s “Shake A Tail Feather” in their set and his call must have seemed to Andre as a step up. Sadly it turned out to be anything but a positive move as he picked up on Ike’s cocaine habit and eventually found himself addicted to both drugs and alcohol, back in Chicago, sometimes homeless right through to much of the 1980s.

At some point in the decade, Andre Williams got a grip on his problems and was playing Chicago’s Blues Joints where he expressed his surprise that he had developed a cult following while his back was turned.

And this was where yet another stage of his career began, when he was re-discovered by Jon Spencer of Blues Explosion who took him to Europe as his opening act where they were heard in London by The Guardian writer, longtime Williams admirer Garth Cartwright, who reported that “he commanded the stage like the veteran ringmaster he was…… cranked out ancient songs, garage, R & B, punk and rap that sounded indisputably contemporary.”

Garth saw him in London again in 1998, on tour with the Countdowns [who Garth hated and I thought were splendid]. He went backstage and later wrote “A dapper man dressed in blood red shoes and pink suit, Williams looked as if he had stepped out of a Detroit club circa 1964. He was very droll, very street, dismissing Ike Turner as ‘a D-O-G, DOG!’ and happy to accept accolades for being ‘The Original Rapper.’

Again, Garth spent time with Andre, in London, in 2008 and in a pre-gig interview “found a broken man. Andre drank Bacardi the way most of us drink tea”. Four years later in Chicago he found him “sober and happy to reflect on his life. He’d finally got control of his royalties for ‘Shake A Tail Feather’, calling that song his greatest creation.”

In 1998 Andre Williams recorded the “Silky” album which The Dallas Observer considered to be “an affirmation that none of those wild young garage rockers who admire him so much, can get as down and dirty as he can.” “Get off my back,” Andre told The Observer when asked about his language. “I’m trying to tell a story. Dig the theme. We can’t all go on the expressway. Sometimes some of us got to take the lowroad.”

Tricia Todd’s documentery, “Agile, Mobile, Hostile: A Year With Andre Williams” [2008] revisited the spot on Chicago’s Randolph Street Bridge where Andre used to beg for handouts. “All of the rich folks got off that train and they had to come down this bridge to go to all of them places where they steal folks’ money.”

Andre Williams was inducted into the Michigan Rock and Roll Legends Hall of Fame in 2012 and his final recording in December in 2016 was the album “Don’t Ever Give Up”. That title pretty much summed up the man’s attitude.

Andre Williams, a barnstorming performer of immense and distinctive talent, a writer of terrific songs, many of which could be considered to be in dubious taste, a prolific producer of recordings and a man who truly embodied the Rock and Roll lifestyle, died in a Chicago hospital in March 2019, just two weeks after he was diagnosed with colon cancer. Although he had been battling with other health issues, seizures and strokes, he had been determined to sing and record again.