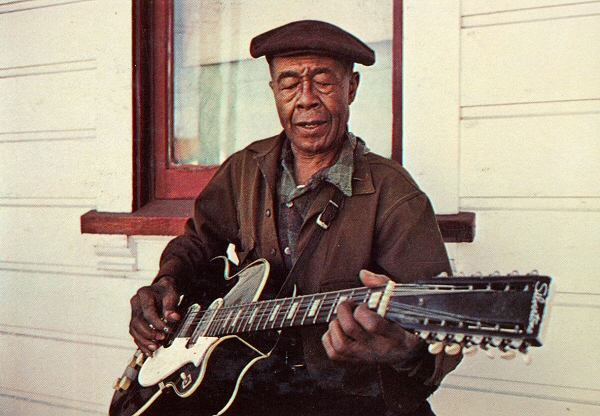 In the early 1960s I was working days as a photographer at Birmingham College of Advanced Technology, now known as Aston University. I somehow found myself running the students’ weekly Tek City Jazz Club, and it will probably come as no surprise to hear that one term I sneaked in a series of Blues events.

I was to work regularly over the coming years with Dupree, kept in touch with Buddy, one of the greatest of all Blues guitar man and now the Grand Old Man of Chicago Blues, but Jesse Fuller was my first, and absolutely unforgettable encounter, with the great and now neglected tradition of One Man Blues Bands.

Jesse Fuller, when in full flight onstage, was a wonder to behold. Singing, playing 6 or 12 string guitar, with harmonica, kazoo and microphone on his chest rack, hi hat cymbal and Fotdella, occasionally bringing in washboard and then laying it all aside to break into a tap dance, soft shoe or buck and wing while at the same time accompanying himself on guitar was an all-action performance that if you haven’t seen, is impossible to imagine. Nothing in the music was sacrificed in order to deliver this performance and he wrote terrific songs which he always sang beautifully.

I probably need to explain that earlier reference to The Fotdella. The ever-resourceful Jesse Fuller invented and constructed his own bass contraption, a large upright box with a rounded top resembling a double bass, six piano bass strings stretched over the body, which were struck by Piano hammers operated by a set of pedals. To play the Fotdella, it was necessary to remove your shoe. I asked Jesse why he called it a Fotdella. He replied, “You hit it with your foot, and it goes Della, Della!”

Jesse Fuller was born on a farm in Jonesboro, Georgia in March 1886. He was given away by his mother to foster parents who badly mistreated him. While still a boy he went to work on a farm, in a broom factory, then a barrel factory and in a rock quarry.

He had dropped out of school in 3rd grade and ran away from home to concentrate on music. His first instrument was a home-made stringed mouth harp, before he learned guitar from a Big Stella, played dances, suppers and picnics in Atlanta and joined The Hagenbeck Wallace Circus where his jobs included tent-stretching.

He left the circus in 1921 to hobo across the U.S., working the streets, singing, playing guitar and dancing for tips eventually finding himself in Los Angeles selling his hand-made cloth-covered wooden snakes on the street and shining shoes. Which is where he met and was befriended by Douglas Fairbanks who arranged for him to appear as an extra in the Fairbanks movie, “The Thief Of Baghdad”. This was followed by an appearance in Pola Negri’s “East of Suez” and later “End Of The World” and “Hearts of Dixie”. Fairbanks also set Jesse up with his own Hot Dog Stand in Santa Monica.

Somewhere in the middle of this chaotic life he found time to work on the Southern Pacific Railroad who rewarded him for his service with an annual free rail pass for “self and wife”. This prompted him to go back to Georgia “to find a real nice wife to go with the pass”. He brought her back to California and bought a house in Oakland where they brought up three daughters, Jarania, Alice and Gertrude.

In 1951, at 55 years of age, he decided to go into music full time. Encountering difficulty in finding reliable musicians, the ever-practical Fuller decided to work as a One Man Blues Band, and the rest is history.

In 1955 at the age of 59, he kicked off his recording career, appearing on “Folk Blues: Working On The Railroad with Jesse Fuller”, recorded in El Cerrito and issued on Topic. He subsequently recorded for Good Time Jazz, Bluesville, Prestige and more.

By 1959 Jesse was established. Appearing on Bobby Troup’s “Stars of Jazz” ABC TV Show he was heard by another guest on that show, the English bandleader Chris Barber, who was enchanted by his performance. So much so that he brought him to the UK to tour with The Barber Band in 1961 and somewhere along the way Jesse squeezed in appearances with The Rolling Stones and The Animals. Fuller also appeared in the films “The Blues” [1962] and “Roots of American Music: Country and Urban” [1971].

I still find it amazing that this delightful, gracious man, blessed with such humour and incredible talent for music, should have emerged from poverty and hardship, driven by his courage and optimism to become such an influential figure to so many of popular music’s most important names.

Illness dogged him from 1971, though, indefatigable as he was, he continued to perform whenever he was able. In 1976, at the age of 79, Jesse Fuller, The Lone Cat, succumbed to heart disease and died in The Dowling Convalescent Hospital and was buried in The Evergreen Cemetery in Oakland, California.

I think I’ll go now and listen to “San Francisco Bay Blues” and “The Monkey and The Engineer” and just remember The Lone Cat.