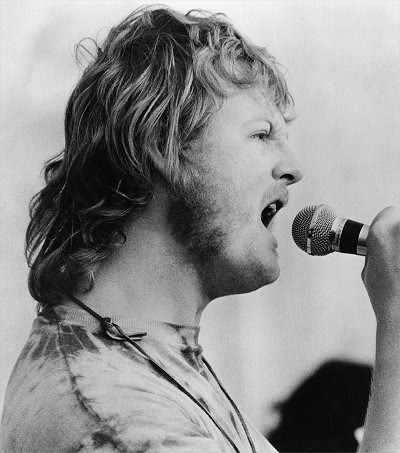 During a recent Blues Talkin’ session at a Tuesday Henry’s Blueshouse, the interviewer, Chris Barrow, called upon guitarist Bob Wilson, introduced him to the audience and proceeded to interrogate him about a milestone 1971 blues tour. The feature was The King Biscuit Boy, Canadian blues singer and harmonica player whose tour that year, through the UK and Europe, was the first of many such tours organised by Big Bear Records, the others featuring American bluesmen.

Bob Wilson was the piano player in the all-star Brum band that backed the Biscuit Boy through a gruelling 43 performances – shows, TVs, radios in seven weeks. The other guys were Sprike Hopkins, guitar, Greg Masters, bass guitar, and Roger Spencer, drums. I remember it being the then-current Idle Race line-up and that we borrowed Jeff Lynne’s electric piano.

The band were absolutely terrific, as you can see from this German TV show filmed in Bremen during that tour”

The King Biscuit Boy was so named by bandleader Ronnie Hawkins in reference to the blues radio programme on Radio KFFA in Helena, Arkansas, called “King Biscuit Time” and sponsored by The King Biscuit Flour Company. Christened Richard Alfred Newell, he was born in 1944 in Hamilton, Ontario to Lily and Walter Newell, a member of the British Royal Air Force stationed in Canada during the war. He started playing harmonica when he was twelve and joined Son Richard and The Chessmen when he was 17 and eight years later the band of the colourful Ronnie Hawkins, “The Hawk”.

Early in 1970, after one LP recording, Hawkins fired the entire band who re-formed as Crowbar, recording the album “Official Music” which Newell used to springboard his solo career. I got involved with him in somewhat bizarre circumstances. I was beavering away, in the process of setting up my first ever tour with an American bluesman, Eddie Guitar Burns from Belzoni, Mississippi, but then living and working in Detroit.

The word on what I was up to got out among the London Blues Mafia, who gathered weekly at the 100 Club and always encouraged my endeavours. Resultantly, I got a call from Ralph Mace, classical music manager at the Gulf + Western-owned Paramount Records who had been told to release the “Gooduns” album by the King Biscuit Boy. He told me that he knew nothing about blues, but, if I were to arrange a tour, he would supply me with 100 albums and a bunch of posters to help promote it.

Bob Wilson, when asked what he remembered of that tour, will reply that he knows that he was there because he has seen the photographs and film, but couldn’t quite remember anything at all of those seven weeks on the road, playing the blues every night through half-a-dozen countries!

The King Biscuit Boy, however, did remember it, if only for the stone and a bit he lost during the tour, telling me that he never was worked so hard before or since. Or drank so hard, I responded, but sadly I was wrong, as his heavy drinking did eventually lead to performance problems and cancelled shows and no doubt contributed to his early death, at his home in Hamilton, Ontario, just two months before his 59th birthday.

Despite this all, he did go on to enjoy a successful career with eight released albums. Anyone who has performed with Muddy Waters, Joe Cocker, Allen Toussaint and The Meters and Janis Joplin has to have something very special.