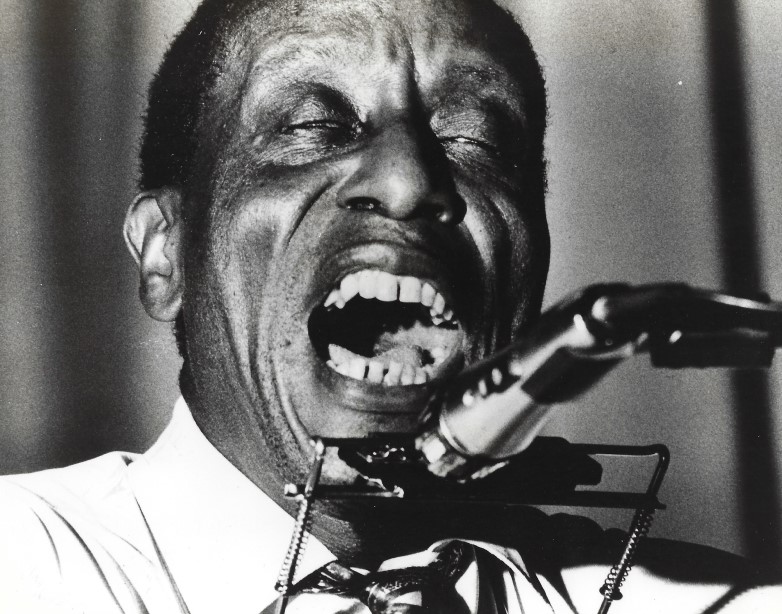 One of the very few good things to come about during this Covid nightmare is the opportunity it affords to dig into the archives. With our usual work of booking out bands and arranging tours currently ground to an absolute halt, we find it a fascinating diversion to sift through the vast amount of memorabilia we accumulated over our near-60 years in the music business.

One thing that caught the eye this week was a cutting from the July 6th 1974 edition of Melody Maker, the leading UK music magazine of that era.

Fronting the record review section was their feature The Month’s Best Albums. This was divided into three sections: Pop, where the selection was Bob Dylan and The Band with “Before The Flood”; the chosen album in Jazz was Jack Teagarden, George Brunis and Miff Mole’s “Trombone Scene” while the choice under Blues was “Doctor Ross The Harmonica Boss” on Big Bear Records.

The citation read: “Pure and unpretentious one-man-band stuff, and highly entertaining it is too, revealing the good Doctor’s earthy blues feeling and barrelhouse spirit. Every track has something to commend it, and while his might not be the most subtle or varied of blues styles, Ross’ joie-de-vivre shines through to make this a most enjoyable collection.”

“The Harmonica Boss” was our second Doctor Ross album on Big Bear Records. The first, “Live At Montreux” recorded in June 1972 and also a Melody Maker Album of The Month, was released through our lease deal with Polydor Records.

“The Harmonica Boss” from November of 1972, was, unusually, recorded live, but in the studio in order to ensure quality as well capturing the feeling of his live performance. The invited audience were members of the UK Blues mafia, Mike Leadbitter, Max Jones, Mike Rowe et al who routinely gathered every week at The 100 Club. They were acknowledged in the sleeve notes by “Rabble noises from The Soho Deadbeats”.

Isaiah Ross was born in Tunica, Mississippi in 1925 and first came to notice in 1936 as a member of the famous Willie Love’s Silver Kings Band, before going on the road on his own, reaching a wider audience through his broadcasts from Clarksdale, Helena and Memphis.

He was an early star of Sun Records in Memphis, the label that launched Elvis, Orbison, Carl Perkins and Jerry Lee Lewis. Doc remembers Elvis hanging around the studio while he was recording, and told me, “Nice boy, truck driver out of West Memphis, used to bring us beers and sandwiches while we recorded. Yes, yes, yes, Elvis Preston.” Clearly Doc wasn’t over-impressed.

Touring with Doctor Ross was never dull. Frustrating, amusing, chaotic, exhausting and exhilarating, yes, but never dull. He sang, played harmonica, kazoo and guitar upside down and not re-strung – “It was that way round when I picked it up” was his reply when asked. He played hi-hat cymbal and bass drum and the whole ensemble, when in full flight, was wondrous to behold.

Doctor Ross was one of nature’s pure eccentrics. I was vividly reminded of just how wild he was, when I was digging into the Big Bear archives, I unearthed some of his letters to me. Here’s one from 1984:

My dearest friend and family how are you all Fine I pray this leave me well as Ever hope you can say the same. Oh yes I have found as much as two are three old checks from you back in the 1970 if you want me to I will send them back to you so you may can cash them it is just a few Dollars but after all it is money I was Drinking at that time and never knew I had them you smile.

Oh yes thank God and I want you to have the first offer now I will have my 30 years in at General Motors on the 22nd of Dec. this year 1984 now I want a good musical contract with some good agent and manager to take good hope in me and we will sow up things please write me Because I will say you are first on my list ok – i am suppose to go to a Big Blues Festival in October 19 through 21, 1984.

Give my love to your wife and all of the friends over there may God Bless us all from Dr. Ross.

I think I might just pour myself a large Jack, and put “Doctor Ross The Harmonica Boss” on the turntable and think back a while.