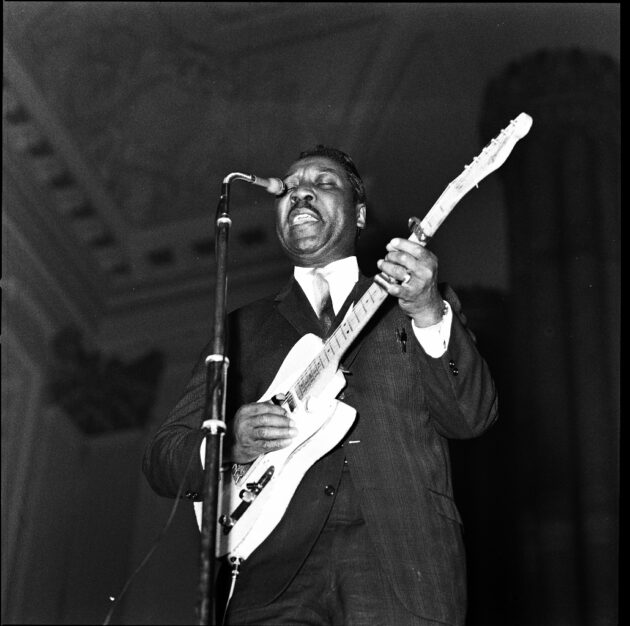 In honour of Muddy Waters’ birthday on 4th April, Jim Simpson pays tribute to the great man and many of the great piano men who worked with him…

It goes without saying that Muddy Waters always employed the very best of sidemen, a list of whom would fill your average book. In the piano department, I was lucky enough to have had the opportunity to work, in one way or another with three of his greatest.

I met Otis Spann on the 1962 Lippman and Rau Folk Blues Caravan that also featured Muddy, Cousin Joe, Sister Rosetta Tharpe, Willie Dixon and more. I was assigned to photograph the show for Melody Maker, at that time the most important UK music publication.

I was fly-on-the-walling through the soundchecks and in the dressing room, but after I shot Otis he told me that it didn’t feel right to be photographed without a piano. So when the show was over, and the last of the audience had left, we went back on stage, took the photographs in the way he wanted, and sat around for a while, him quietly playing his blues while we took a little drink together.

In the summer of 1972 I was on the road through Europe for 6 weeks with Doctor Ross, The Harmonica Boss from Tunica, Mississippi, the first of several tours we did. In June we were in Switzerland where the good Doctor was booked to play at The Montreux Jazz Festival, to open the show for The Muddy Waters Band.

I had arranged with Montreux festival director Claude Nobs to record the Doctor Ross performance for an album on Big Bear. I was talking to Muddy in the hotel bar the day before the show and he was asking why Doc had never before recorded with a band, which got me to thinking, so I asked Muddy if I could ask his rhythm section to back the Doctor for the second half of his set.

Muddy, ever the gentleman, said go ahead, but tell then you’ll pay them a hundred dollars each. I couldn’t believe that I was actually going to record the great pianist Lafayette Leake and The Chicago Aces – Louis and David Myers on guitar and bass with drummer Freddy Below.

I still find it amazing that I got to be so lucky. When Otis Spann left Muddy Waters’ band his replacement was Pinetop Perkins, a thundering piano man who taught Ike Turner to play, Ike saying “Pinetop was at the birth of Rock and Roll because he taught me everything that I played.”

I met Pinetop on several of the occasions we booked Muddy’s band, and he was one of the most fascinating people to talk to. Born Joe Willie Perkins in 1913 on a farm close by Belzoni, Mississippi, at the very heart of the Blues territory, the family soon moved to live on the Paines – Deadman cotton plantation in nearby Honey Island.

He worked the fields from the age of 7, taught himself guitar and then piano, played at local dances as a 10 year old, and frequently performed at The Old Barrel House Honkytonk as well as local Jukes and gambling houses in Honey Island at the grand old age of 13. He teamed with Willie Love, played in Tutwiler and Indianola, joined Robert Nighthawk on Radio KFFA in Helena, Arkansas appearing on Mother’s Best Flour Hour and Bright Star Flour.

Still on KFFA he left Nighthawk to broadcast with Sonny Boy Williamson on the legendary King Biscuit Time programme. In the 1940s, Pinetop injured the tendons in his right arm in a knife fight with a chorus girl in Helena which limited his guitar playing, so he switched full-time to piano.

He found himself in the bands of Little Milton, Albert King and Earl Hooker before moving up to Chicago where initially he took a day job as a mechanic. He developed into a mainstay of Chicago Blues and in 1969 took the piano chair in that wonderful Muddy Waters Band, staying with Muddy until 1980.

Pinetop appeared in the best movie of all time, ‘The Blues Brothers’ [1980] outside Aretha’s Soul Food Café in an argument with John Lee Hooker over who wrote ‘Boom Boom’. This wasn’t his only film appearance, he featured in Clint Eastwood’s ‘Piano Blues’[2003], ‘Born In The Honey’ [2007] and ‘Sidemen: Long Road To Glory’ [2016].

In 2003 he was inducted into the Blues Hall of Fame, won a Grammy for Lifetime Achievement [2005] and at the age of 97 became the oldest ever winner of a Grammy for the Best Traditional Blues Album. In 2004, Pinetop’s car was hit by a train.

Astonishingly, although the car was destroyed, the 91 year old was not seriously hurt. Pinetop Perkins died of cardiac arrest at his home in Austin Texas in 2011 at the age of 97. His career spanned more than 80 years, he was one of the last surviving original Delta Bluesmen.

At the time of his death, he had more than 20 performances booked. He is buried in Coahama County, just north of Clarksdale, Mississippi, right on Highway 61, The Blues Highway. Just two and half miles from where he was born.

We’ve turned the image of Muddy at the top of this article into a t-shirt exclusively available from Henry’s Blues Emporium.