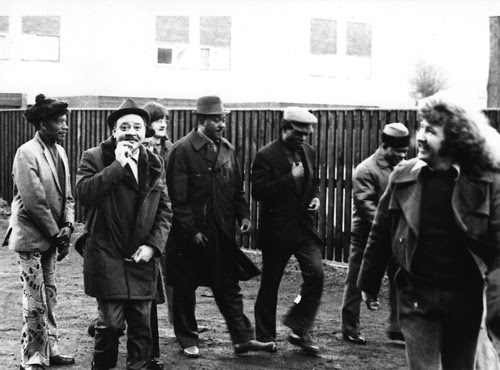 Not only were most of the greats still at their best, the Three Kings were actively touring (as were Muddy Waters, Howlin’ Wolf, John Lee Hooker and Lightnin’ Hopkins). Buddy Guy and Junior Wells were just about to enter the major league.

There was also a further wave of red hot Blues talent that had emerged in the post-war years. Names that we all knew but who, for some reason, remained shadowy. Many couldn’t make a living from the music they performed so wonderfully but had to supplement their income with day jobs. Some, disenchanted and understandably bitter, settled for a life of relevant comfort and security away from music completely.

This is where The Bear came in.

Working with US-based Blues fans – yes, there were a handful – and local U.S. newspapers, Big Bear Records, financially unable to compete with the majors for the services of BB, Albert, Freddie, Muddy and the like, decided to seek out these unsung heroes of the Blues, those legendary – if shadowy – names, whose work on disc was familiar to European fans, but who’d either rarely or never been seen onstage over here.

The first to respond was Eddie Burns, born Belzoni, Mississippi, in 1928, raised in Clarksdale, by then living in Detroit. His glory days in John Lee Hooker’s band were behind him and he was working in the automobile industry. Somewhat rashly, Eddie okayed the idea of a seven week tour through UK and Europe, playing colleges, bars, the occasional small arts theatre.

After it had been agreed to pay Eddie’s return flight, seven weeks salary, hotel, airfare, backing band and travel expenses, the panic set in at Big Bear to recoup. I guess we somewhat overreacted to the problem, as Eddie’s 1972 tour opened with 43 dates in 42 days, through eight countries – and we still somehow found time to record his first-ever album as a bandleader, “

Bottle Up & Go”, which showcased Eddie’s fine voice, harp and guitar playing and laid the foundation for a decade of European tours for him.

This was when Eddie acquired the ‘Guitar’ soubriquet, which still mystifies fans who consider his vocals and harmonica playing to be his strongest suits. It happened like this. A few weeks before the tour started, The Bear was offering him out to venues as plain Eddie Burns, and somehow the dates just weren’t selling.

In a moment of inspiration, directly induced by panic, it was decided to rechristen him. On the only photograph we had, he was pictured clutching a guitar – although we mainly know him as a singer and harp player. So, it was no great leap to rechristen him Eddie ‘Guitar’ Burns.

Maybe it sounded more down-homey, maybe people imagined that they’d heard of him, possibly confusing him with Burns Guitars. Either way, the dates started to come in and the tour took shape. So, all was well – until, on the very eve of his arrival at Heathrow, Blues expert Mike Leadbitter, taking a taste with the Bear at The 100 Club said that he wasn’t aware that Eddie played guitar!

More panic as what Mike didn’t know about The Blues, was just not worth knowing!! Twelve worried hours passed, and my sense of relief was tangible as Eddie emerged from immigration, clutching a guitar case.

Johnny Mars was born in Lawrence, South Carolina on July 12th, 1942. His parents were migrant farmers who travelled throughout the Carolinas. When his mother died he moved to New York, then San Francisco, gained employ as a prize fighter and stayed in California to form his own band.

For reasons that remain obscure, he fetched up in London in May 1972, hardly having time to unpack his case before he found himself in Chalk Farm Studios recording the first of two albums for Big Bear, “Blues From Mars”.

His fiery and dynamic harmonica playing is also to be heard on “Johnny Mars & The Oakland Boogie”, his second waxing.

The next marathon tour undertaken by The Bear was with one-man-band Isaiah Ross, the legendary Doctor Ross, the Harmonica Boss. A star of Sam Phillips’ early Sun Records’ race roster in Memphis, Tennessee, the good Doctor had clear recall of a young white truck driver from West Memphis who was prone to hanging around the recording studio, fetching beers and sandwiches and running errands for the musicians: “Sure I remember Elvis. Elvis Preston, nice boy”, the Doc would say.

Ross was born in Tunica, Mississippi, in 1925. His all-action shows were unforgettable and won him a legion of fans. He played guitar upside down, hi-hat cymbal operated by one foot, bass drum by the other, with his harmonica and kazoo slung on a chest rack. And he sang as well, absolutely mesmerising to witness.

The climax of his first tour of many for Big Bear was at The Montreux Jazz Festival when, in June 1972, he recorded the “Live At Montreux” album on a night when he shared the bill with Muddy Waters. This was the only occasion he recorded with a band – and what a band! It lined up as Lafayette Leake (piano), Louis Myers (guitar) and David Myers (bass), and Freddy Below (drums), aka The Chicago Aces…in fact, the Muddy Waters Rhythm Section.

Gene ‘The Mighty Flea’ Connors (born in Birmingham, Alabama) was touring Europe in the Summer of 1972, featuring with the splendid Johnny Otis Show, when The Flea fell in with The Bear and all was lost. Well, not all: Flea missed a rehearsal while having a taste with his new pal, turned up late, took a tongue-lashing from Otis, responded with “Why don’t you go keep a restaurant like all them other Greeks?” and promptly jumped ship.

Nothing for it then, but to move in with The Bear and use Birmingham as his touring base. Mickey Baker was due in from Paris for a Big Bear tour, so the obvious move was to take them both into the recording studio (in August ’72) to cut “Let The Good Times Roll”.

Flea did not return Stateside for many years, subsequently setting up homes in Denmark, then Belgium, before settling in Germany. He continued to work and record with Big Bear for more than twenty years, featuring on the 1995 “Blues & Rhythm Revue” album by King Pleasure & The Biscuit Boys and recording singles with blue-eyed soul funk band Muscles.

Working with Mickey Baker was inspirational, so the next move had to be to cut an album with the great guitarist. Born in Louisville, Kentucky, 15th October 1925, Mickey became New York’s top R&B session guitar man, recording prolifically for the Savoy, Victor, King, Aladdin and Atlantic labels, before enjoying a million-seller with his song “Love Is Strange” recorded by Mickey & Sylvia in 1957.

Disillusioned with The American Way, he moved to Paris where the more liberated and sophisticated lifestyle found an instant convert. The erudite, intellectual, laconic, witty Mickey Baker was one of God’s better gifts to mankind.

Fortunately, before Mickey returned to record the “Take A Look Inside” album in January 1973, the legendary Willie Mabon (born Hollywood, Tennessee 24th October 1925) also fetched up in Paris, where Mickey took The Bear to hear him playing in a Left Bank café. Baker asked the Bear, who needed no persuasion, to add Mabon to the roster and to bring him over with Mickey to record the album “The Comeback”.

Baker appeared on Mabon’s album, Mabon on Mickey’s. Mabon, curiously, had, also, enjoyed a million-seller: his “I Don’t Know” was an early 50s hit for Chess Records and was later covered by The Blues Brothers in their epic movie. Mabon’s sly, sinuous, slinky vocal delivery – in the style of the great Charles Brown – and his ever-driving piano style proved irresistible, with Mose Allison citing him as a major influence. Sadly Willie died in April 1985 in Paris. He was 59 years old.

By early 1973, things were beginning to fall into place. These Bluesmen, largely ignored Stateside, grabbed at the opportunity to play their music for young, enthusiastic and knowledgeable audiences who had been brought up on a diet of Rory Gallagher, The Stones, Eric Clapton and the influential Alexis Korner radio show, who now wanted to hear the originals. By chance, a friend of The Bear had, sort-of-accidentally, purchased a Mercedes splitter van that more-or-less accommodated ten people and the gear, but he didn’t really know what to do with it.

What an opportunity! It seemed so simple. Recruit a line-up of some of the best names around, think up a fancy title (American Blues Legends ’73 seemed fairly to the point), book a series of concert halls and take off, convinced as we were that we were on a mission from God.

Battered, road-weary, but jubilant, the show played its final show in Belgium, and headed back to the coast for the overnight cross-channel ferry to Dover. The final memory is of Lightnin’ Slim and Boogie Woogie Red struggling to keep their foothold on an icy quayside at Zeebrugge as they somewhat ineffectually attempted to swap blows.

The reason for their rumble? Possibly a long-burning feud that they’d managed to control for the duration of the tour? No. Maybe there was a woman involved? Wrong again. No, it was far more serious than that.

Having jointly invested in a litre of whiskey before leaving the concert hall, each believed the other had consumed rather more than his fair share. As long as it was nothing trivial then.

Read about what happened next in part two of our feature