Buddy Guy: On A Mission From B.B and Muddy 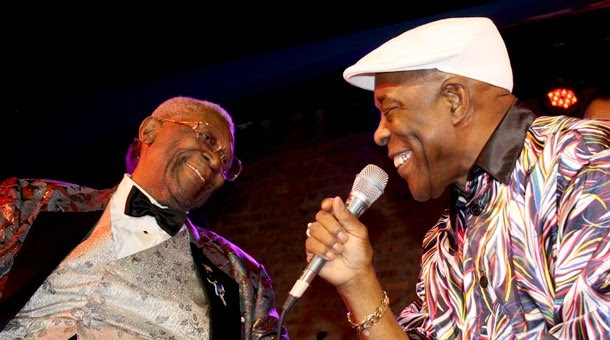 Part four of our Buddy Guy series. Follow the links to catch up on part one, part two and part three.

In 1989, Buddy Guy opened his Buddy Guy’s Legends club in the South Loop neighbourhood of Chicago at 754 South Wabash Avenue, relocating to number 700, its current home in 2010. The 500 capacity club is billed as The Premier Blues Club in the World, and with Buddy at the helm, who can argue with that?

He is very comfortable there, often to be found hanging out at the bar, chatting to customers who come to the club from all over the world. Not like it was, Buddy remembers “when I first played Chicago clubs in the late 50s, if you saw a white face it was almost always a cop.”

Buddy still makes regular appearances at Legends, including shows throughout each January. It is one of the few blues clubs left in Chicago and has been the venue for several live recordings including the albums “Junior Wells Live At Buddy Guy’s Legends”, Buddy with Junior “Last Time Around – Live At Legends” and, unsurprisingly, “Buddy Guy – Live At Legends”.

Stevie Ray Vaughan would often appear there, to which there is a tragic footnote. On August 27th 1990, Stevie Ray and his band Double Trouble were opening for Eric Clapton at Alpine Valley Music Theatre, East Troy in Wisconsin.

Anxious to get to Chicago and Buddy Guy’s Legends, Stevie Ray, Clapton’s agent Bobby Brooks, bodyguard Nigel Browne and assistant tour manager Colin Smythe boarded a helicopter that crashed soon after take-off in thick fog, killing all five occupants. It could have been even worse.

Stevie Ray’s brother, Jimmie and his wife Connie had expected to travel with him but there weren’t enough seats. Stevie Ray had asked Jimmie and Connie if he could take the last seat saying “I really need to get back to Chicago”.

Part of Buddy’s motivation for opening his club was to do with that very real sense of responsibility that to this day he shoulders, the mission passed on to him by both Muddy and by B.B. As Muddy told him, just before his death in 1983 “Just keep the damn blues alive. Buddy said “they all told me that if they left here before I did, then everything was going to be on my shoulders. So long as I’m here, I’m going to do whatever I can to keep it alive.”

B.B. had long been worried about the music’s future, wondering “will the blues go the same way as Dixieland jazz, with its achievements firmly sealed in the past?” Buddy was overcome with grief at the funeral of B.B., facing up to the loss and the suffocating sense of responsibility, “feeling all alone in this world, like the last fluent speaker of an obscure regional language.”

“I went to sleep yesterday and woke up and all the great blues players are no longer with us. Muddy, Wolf, B.B. – they’re all gone. Before they passed away, when they were in their prime, we used to have a drink and a laugh and talk about how when one of us is gone, the others have to keep it going. I’m trying to do something to keep this music that I so well alive.”

With the passing of B.B. King, Buddy became the undisputed Boss of The Blues, saying “just what are we supposed to do now?”

The 1991 release of Buddy Guy’s seventh studio album “Damn Right I Got The Blues” on Silvertone Records was another milestone in his career. After only limited recordings during the previous years 10 years, this release, featured guests Eric Clapton, Jeff Beck and Mark Knopfler and was recorded at Battery Studios in New York. It enjoyed top 50 chart placings in New Zealand, Australia, Sweden, Canada, UK, Holland and a not-so-impressive #136 on Billboard in the U.S.

One cannot help but wonder why America lags so far behind when it comes to the Blues. This was followed two years later with another Silvertone album release, “Feels Like Rain” which had John Mayall and Bonnie Raitt guesting, and then in fairly short order, between 1994 and 2018 came ten more albums, the most recent of which “The Blues Is Alive and Well”.

The indefatigable Buddy Guy is set to embark on a 35 date U.S. promotion tour opening in Louisville, Kentucky on February 25 and closing in Detroit on May 19. Discussing his mindset around this album, Buddy explains “I got children and grandchildren who didn’t know who I was, but nowadays we can play outdoor concerts and see kids that are eight, nine, twelve years old coming to me and saying, “I didn’t know who you was, but I read what Eric Clapton said about you”. He continues “I’m always trying to make an album that someone accidentally plays where some kid hears it, picks up a guitar, and helps keep the blues alive”.

With this in mind, it’s interesting to note that the then 28 year old James Bay, singer and guitarist from deep into the delta of Hitchin, Herefordshire, that’s England, guested on this album. Bay by then had already a bunch of successes behind him, starting with the single Hold Back The River which went Platinum and album Chaos and The Calm which hit number one in 2014.

He was clearly impressed by that country boy from Lettsworth, saying “Listening to Buddy Guy was my musical education. The blues always has and ever will inform my music and what I do. I learned about music from Buddy Guy, I learned to play guitar from Buddy Guy. To get to work with such a legend was a total honour, entirely surreal. I want to thank you for inviting me on board. Buddy, you’re the man.”

Also contributing to “The Blues Is Alive and Well” album were Mick Jagger, Keith Richards and Jeff Beck. Buddy says, “before Junior Wells passed away, we did we did a whole tour with Mick. They exposed us a lot, I owe those guys because they put us in places we hadn’t been. Those guys have been my friends before they got famous. Whenever they come to town they stop by the loudest blues club in Chicago and I get into the kitchen and fix us up some Louisiana Cajun and Soul food, gumbo, jambalaya, chicken and ribs and catfish po’ boys. We still have a lot of fun”