Basie and The Blues 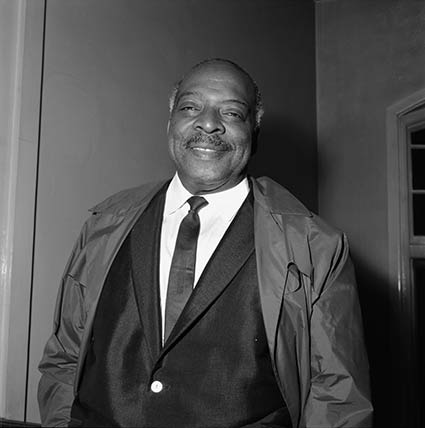 A lot of stone blues fans out there are probably unaware of just how blues-rooted the great Count Basie Orchestra was.

That wonderful band emerged in good blues territory, Kansas City, Missouri, in 1935 when Bill Basie took over the leadership of the Bennie Moten Orchestra when its leader died in a failed tonsillectomy. The band’s first singer was the extraordinary blues shouter Jimmy Rushing, known as “Mister Five by Five” – “he’s five feet tall and five feet wide.”

Rushing, born in Oklahoma City, gravitated to KCMO in the mid-1930s because that’s where all the action was. During the Prohibition Era KC Mayor Tom Pendergast declared the city wide open and ignored Prohibition, thereby attracting musicians, dancers, card sharps and hoodlums from all over the country.

Soon the town found itself jumping to the Blues of the Basie Band, resident at the Reno Club. The band played nightly from 9.00 pm until 5.00 in the morning – and, if you’re wondering how the band got to be so tight, there’s the reason.

The Reno Club was wired for live broadcasts on the experimental radio station W9XBY and each night for six nights a week the Basie Band could be heard locally after midnight – as it happens, the radio announcer was the first to christen Bill Basie “Count”. W9XBY’s transmitter was powerful enough for the station to be carried to Chicago where famed record producer and talent scout John Hammond heard the Basie Band.

Totally impressed, he arranged for the band to come to New York to perform and record – and the rest is history. Remarkably, 36 years after Basie’s death, the band still exists, as a continuing unit, not a “ghost band” re-creation.