Blues For Ukraine: Meet The Guys Who Are Taking Care Of Business 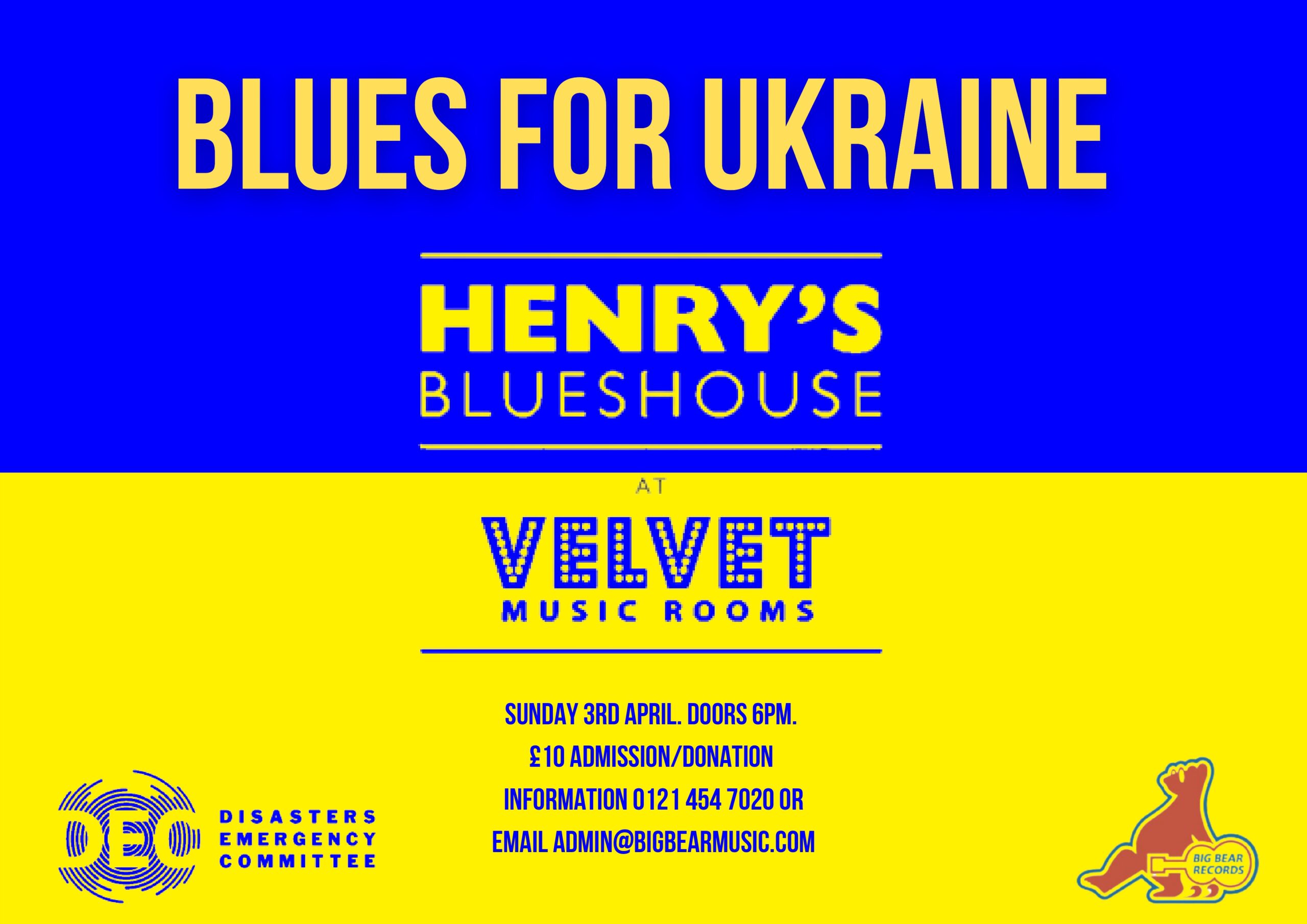 With that very important Blues For Ukraine event less than two weeks away, I thought it would be good to take a look at the impressive line-up of blues musicians who are all performing, without fee or any expenses, to help ensure that the Disasters Emergency Committee Ukrainian Appeal gets maximum benefit.

King Pleasure & The Biscuit Boy formed in deepest Darlaston, it all started in what was, back then in the 1980s, a cool place to hang out, a Milk Bar. Over a few too many milk shakes, five school pals, all enamoured with rock and roll, local heroes Slade and Bill Haley & The Comets, decided to form their own band. The fact that none of them actually played, or even owned, an instrument, was not seen as any sort of a barrier as they bargained over who would play what instrument. They then made their ways to music stores, second hand and pawn shops, pausing only to chisel some hard-earned cash from their parents.

As they learned to play their instruments and got into serious and lengthy rehearsals, their musical horizon quickly expanded as these school kids discovered the music of Louis Jordan, Wynonie Harries, Big Joe Turner, B.B. King, etc. They kept at it, listening, learning, rehearsing and not long after leaving school they found themselves a name, The Satellites. It wasn’t long before they had the temerity to enter a Talent Contest in Birmingham, which is where I first encountered them. I was a judge in that Talent Contest, loved their attitude, their swagger and irrepressible swing enough to ignore their still-developing musicality and they ran out the winners.

I became their manager and my first task was to convince them that their name did not reflect what they were. “What do they suggest?” asked the bandleader, singer and saxophonist, Mark Skirving. I didn’t actually suggest King Pleasure [as in the influential vocalese pioneer of that name] or The Biscuit Boys [with The King Biscuit Flour Hour on Radio KFFA in mind], but just said that it should be something like that. Mark said that was definitely right, and, ignoring my protests that I was simply offering an example, was unshiftable.

Now, some 36 years, maybe 7000 performances, eleven albums, dozens of radio and TV appearances later, King Pleasure & The Biscuit Boys are a force to be reckoned with, still touring, playing festivals, clubs and concert halls, having two U.S. tours under their belts as well as appearances in every European country, as well as Morocco, UAE and Russia. They have shared stages with B.B. King, the actual Blues Brothers Band from the movie, Ray Charles, Cab Calloway & His Cotton Club Orchestra and many many more.

Unsurprisingly, there have been personnel changes over the decades, but two of those original members are still strutting their stuff with King Pleasure & The Biscuit Boys, and are both freely giving of their time and talent to play their part in Blues For Ukraine.

Some jazz festivals ago, a regular blues performer at our event, the terrific Piedmont style guitar picker, Brooks Williams from Statesboro, Georgia, finished off his set playing a cigar box guitar. Well impressed, I said how good it is that some small company in America is still making these fascinating instruments. “These guitars,” Brooks replied, “are made in Smethwick, Birmingham.”

And that’s how I came to know Chickenbone John, The King of The Cigar Box Guitar. John is now a valued regular at Henry’s Blueshouse, the jazz festival and any other opportunity I can find to put his unique talent in front of an audience.

Chickenbone John was the main feature of the excellent BBC “Cigar Box Blues” film, and is at the forefront of the thriving cigar box guitar movement, making around 200 to 300 guitars every year, running the company with one of his daughters and selling them throughout the UK and even further afield.

“Is there a better male jazz singer in the UK? I think not,” wrote The Birmingham Post, expressing precisely what many of us in the jazz world have long believed to be the case.

Roy was born in the Sparkhill area of Birmingham to a Ska-loving father and was brought up to a soundtrack of good music. He was in the school choir and sang gospel in church. Somewhere along the way he fell under the spell of Nat King Cole, and singers of whatever style don’t come much classier than that.

A turning point for Roy was when he approached Jamaican saxophonist and bandleader Andy Hamilton and asked if he could sing a number with his band, The Blue Notes. Not only did he get to sing, but he remained a fixture with them as featured singer for 13 years where he developed his very personal vocal style, following Andy’s early advice to listen to Joe Williams with The Count Basie Band.

In 2000, with the birth of his daughter, Roy made what turned out to be a very sensible decision to take the financial security of a day job and to enjoy music as a hobby. What was good for Roy and his family was a loss for jazz and blues and I believe is the only reason why Roy Forbes is not widely recognised as the unique, impeccable, dynamic, soulful singer that he undoubtedly is.

That is not to say that he hasn’t enjoyed success. He has featured in Festivals in Barbados, Milan and elsewhere, memorably when he featuring at The Limoges Jazz Festival in France, along with an all-star band recruited for that performance which featured leading British musicians Bruce Adams, Alan Barnes, Brian Dee, Len Skeat and Ralph Salmins. No surprise then, that their performance was considered to be the high spot of the festival and the guys in that band haven’t stopped talking about Roy ever since.

On the recording front, he has released, to date – and I’m sure that there’s more to come – the albums “Going Home”, “Telma” and “Last Orders”.

Imminently, there’s more to come. The indefatigable Roy Forbes, determined to get to the roots of the music is going back to the blues with his new band, Roy Forbes & Texas Rumble digging into those Lone Star State Blues, and set to appear locally at Velvet Music Rooms (Tuesday 5th April), The Core Theatre (Friday 8th April) and Birmingham Botanical Gardens (Sunday 10th April).

Johnny Caswell is an exceptional guitar man, songwriter and singer who, although widely acknowledged throughout the music business, is, to the public in general, a very well-kept secret. The reason for this may be quite simple, his ever-present self-effacing modesty. Although held in the highest respect by musicians and entertainers, he appears never to have gone out of his way to court fame and fortune, simply getting on with the business of making great music.

I first met John in 1970 when my band, Locomotive, was on its last legs. It had always been a successful band, touring UK & Europe, before we had a hit in 1968 with “Rudi’s In Love”, a cheery danceable Ska single. Then came the problems. Three of the band members, enamoured with the so-called Progressive music of that time, wanted to follow up with the doom-laden, though excellent single, “Mr Armageddon” while I felt it wiser to consolidate our audience by following up in the same Rudi vein. The production company, headed by the renowned record plugger, Tony Hall, sided with “Mr. Armageddon”, and so it was released, received fine reviews, but didn’t sell, leaving our audience thoroughly confused and our dates just dried up. We agreed to split, with the breakaways forming what I considered to be the appropriately-named Sacrifice, while we replaced them with John Caswell, vocals, electric and 12 string guitars and Keith Millar, vocals and guitars, joining remaining Locomotive members Mick Hincks and Bob Lamb.

There seemed no point in continuing with the band name, and I decided, with hindsight, somewhat foolishly, to name the band after a James Thurber novel, The Dog That Bit People. EMI stuck with us, I got to produce my first album at Abbey Road Studios, with George Harrison spending an entire day quietly sitting at the back of the control room. We got terrific reviews, didn’t sell a lot at the time, although I believe that “The Dog That Big People” LP is now something of a collector’s item and I am today still proud of what we did, and I just hope that Johnny Caswell feels the same. His singing and playing were right on the money, and he wrote seven of the twelve songs, including “A Snapshot of Rex” which referred to a Thurber short story, and what we all felt, without much foundation, was a clever and humorous send-up of Black Sabbath entitled “Reptile Man”.

Johnny Caswell remembers that his first band were The King Biscuit Blues Band, and around that time he was teaching a young guitarist from Chelmsley Wood all about playing chords. The guitarist’s name was Ted Turner, later to star with Wishbone Ash.

Johnny has a wide musical taste, and spent a time with country rock band Little Ginny & Room Service when they backed such stars at Glen Campbell and Tammy Wynette. Johnny remembers a late-night motorway stop to eat at Watford Gap Services and Tammy asking him what she should have to eat, taking his advice and ordering egg and chips.

Johnny has supported Eric Clapton, played The London Palladium, been invited by Ernie Wise to join him in singing “Bring Me Sunshine” and doing that famous dance with him at a charity concert in Chalfont St. Peters. He had his own Johnny Caswell Band, with Nigel Darville, John Wilson – that’s Bob Wilson’s brother – and UB40 producer, Bob Lamb, appeared on TV in France and played through Europe. More recently, Johnny has been a mainstay in The Steve Gibbons Band.

In next week’s Henry’s Bluesletter we’ll be taking a good look at the other special guests on Blues For Ukraine: Ricky Cool, Melvin Hancox, Mickey Barker, Mick Hopkins and Chris Bowden, as well as the bands that are set to provide the backbone to the event, The Nitecrawlers, The Martin Burch Band and The Shakedown Brothers.