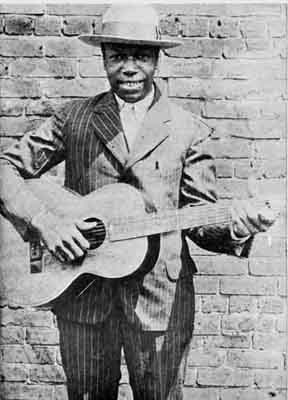 There is no denying that, for many of us, when we first encountered The Blues, discovering the exotic names of so many of the musicians was one of the reasons we dug deep and discovered The Blues.

My initial encounter was with Big Bill Broonzy, not the most unusual of soubriquets, but it was enough, at the age of fourteen, to grab my imagination.

I subsequently toured and recorded Slim, Homesick, Whispering, Doctor, Playboy, Good Rockin’, Boogie Woogie, Baby Boy and many more. When I hooked up with Sunflower, Mississippi-born One Arm John Wrencher I felt that was just too cruel, renamed him Big John Wrencher – and it stuck. These things can be turned to advantage, of course.

The first tour I contracted to was with the Detroit-based Eddie Burns. Trying to persuade clubs, colleges, concert halls and festivals that someone with such a straightforward name was a genuine, down home, authentic bluesman was proving to be extremely difficult. My cause wasn’t helped by the popular American TV series, “77 Sunset Strip” where one of the leading characters was played by Edd Byrnes. “You mean the Hollywood actor?” was far too often the response of venue managers.

I figured that the only way out was to beef up his name, so overnight he became Eddie Guitar Burns. We subsequently filled every date of a seven-week tour and Eddie continued to use the name for the rest of his career. Ironically, I later learned that in his earlier years, at various times, Eddie had worked as Big Ed and as Slim Pickens!

Barbecue Bob was born Robert Hicks in Walnut Grove, Georgia in 1902, one of at least three children. He learned guitar from his elder brother Charley, who offer gigged under the name Charley Lincoln. Both Bob and Charley took guitar lessons from Curley Weaver’s mother, Savannah, before moving together to Atlanta to play parties, dances and on street corners as well as touring with travelling medicine shows.

Bob, with his driving, bottleneck slide guitar, often a 12 string, and gritty vocals became one of Georgia’s most popular blues players. He was named Barbecue Bob by the Columbia Records scout that found him playing his regular spot at Tidwells Barbecue Place and made sure that the name stuck by having Bob’s publicity photographs taken wearing a full chef’s outfit. Bob only recorded from 1927 to 1930, both in Atlanta and New York, but in that time he cut a remarkable 70 sides. He also recorded accompanying Nellie Freeman in 1929 and as part of The Georgia Cotton Pickers in 1930 along with Curley Weaver and Buddy Moss. Bob, who was well on course to becoming a really well-known blues figure, was cut down by pneumonia in 1931, dying in Lithonia, Georgia. He was buried in the local cemetery of his home town of Walnut Grove. He was 29 years old.

The name Big Bloke is not the coolest of blues names, but pianist James Burke Oden must have realised that, because at various at times he went onstage as Poor Boy and St. Louis Jimmy. Born in Nashville in 1903, he moved to St. Louis at 14 to hobo through Tennessee working outside of music before teaching himself piano and going on to work with Big Joe Williams and then Roosevelt Sykes, playing house parties and clubs. Later he relocated to Chicago where he recorded for Bluebird and Decca with Roosevelt and Big Bill Broonzy, going on to enjoy an extensive recording career in Chicago.

The next one ranks alongside One-Arm John Wrencher when it comes to nicknames in bad taste. For reasons that we can only guess at, William James Morris, a fine singer who also played bass, drums, guitar, organ, piano, saxophone and trumpet, worked as Dead Eye Norris. Born to harmonica player Roosevelt Norris and Juanita Williams in Jackson, Mississippi in 1951, the family moved to Chicago when he was four where he was soon singing in church and by fourteen he was frequently gigging in high school bands.

From 1968 to 1971 he served time in Cook County Jail where he met Fenton Robinson who influenced his guitar style while in prison. He also played in the prison band, and when back on the streets he played the Chicago clubs, often on guitar with Lee Shot Williams and featuring with Little Mack Simmons. Norris was playing with The Wild Fire Band at Smitty & Sadies, Minnies and other Chicago clubs through 1975. He was featured in the Willie Dixon documentary, “I Am The Blues”, filmed in Berlin in 1977. The 1980s were bad years for Dead Eye, and sometime in the 90s he decamped to Memphis, changed his name to Sonny Mack and formed his Sonny Mack & The Mack 2 Band, taking a residency at Kings Palace Café Patio on Beale.

That same year, Willie Dixon put together a show featuring The New Generation of Chicago Blues that featured Lurrie Bell and Dead Eye, who was falsely billed as “Son of Mack Simmons” as the theme was Sons of The Blues.

Surely one of the strangest blues names, in more ways than one, was Bat The Hummingbird, not least because not one but two bluesmen rejoiced in that name. Charlie Cow Cow Davenport, not content with two nicknames, Bat The Humingbird and Cow Cow, also worked as Georgia Grinder, George Hamilton and Memphis Slim (he did actually precede the pianist universally known by that name). Charles Edward Davenport was born in Anniston, Alabama in 1894, and Cow Cow was his childhood pet name.

His father, Clement, was a preacher, his mother Queen Victoria Jacobs, a church organist. One of eight children, initially self-taught on his mother’s organ, he attended Alabama Theological Seminary in Selma from where he was expelled for ragging a classical piece at some function. He graduated to playing at dances, honky tonks and cabarets in Birmingham, Alabama.

At the age of twenty he moved on to appear at the barrelhouses and brothels of Atlanta’s Black Bottom district and worked with Bessie Smith, Ivy Smith and Art Hodes. He recorded prolifically, reportedly toured Europe in 1925-26, appearing before royalty, made theatre tours with his own Cow Cow’s Chicago Steppers, worked outside music for a year, as a washroom attendant around 1944 and died at home in Cleveland of hardening of the arteries in 1955.

Drummer and pianist James Robinson, aka Bat The Hummingbird, was born on Christmas Day 1903 in Algiers, Louisiana. He moved to Chicago when he was nineteen, worked with Bertha Chippie Hill in local clubs, and with Louis Armstrong at Sunset Café, recorded for Champion Records in Richmond and the Tone label in St Louis where he played drums in the Dollar Bill band. He died of tuberculosis in 1957. Paul Oliver wrote, “He had a little trick of singing that set him apart, a falsetto throat whistle which his friends called humming. That explains his nickname.”

I am not at all sure that others share my fascination with off-beat Blues names. If you do, we might well in an upcoming edition of Henry’s Bluesletter, take a look at Barbecue Bob, Tarheel Slim, Hightide Harris, Baby Face Leroy, Tangle Eye, Charley Smokehouse, Mud Dauber Joe, Peeties Boy, Mississippi Mudder, Mr. Shortstuff and who knows who else – but not Birmingham Sam. That’s too easy, it’s John Lee Hooker.