On The Road With The Blues 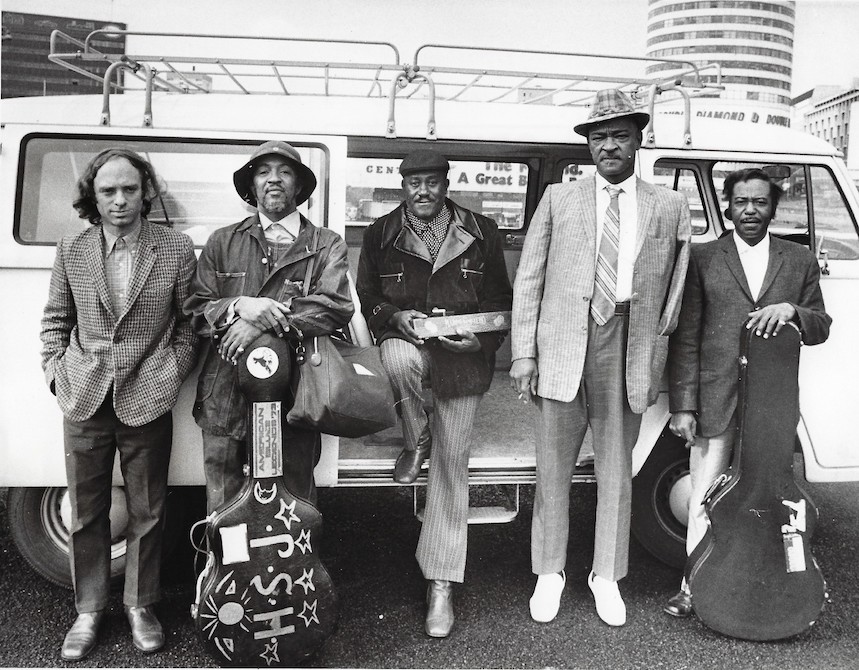 Following on from part one of our look back at the American Blues Legends tours and albums, we look at the later editions…

American Blues Legends tours continued sporadically up to 1979. Latterly they were probably better organised – certainly, the 50-seater coaches were an improvement on the original bone-shaker – and they often played fancier halls, to better-dressed audiences. But the sense of excitement, of pure adventure, of being on a crusade, was never equalled.

One effect of the Blues Legends tours, was the major exposure it gave the individual artists, in many cases springboarding them onto a series of tours of their own. A striking example was the irrepressible Cousin Joe from New Orleans (born Wallace, Louisiana in 1907), who played eighteen tours for Big Bear and became an integral part of the family.

A man of immense charm and old-time New Orleans courtesy, he was the toughest act to follow on this planet. He would take an audience by its throat, and by dint of his good-time piano playing, sly vocals, immense repertoire, uncontrollable sense of fun, and show-stopping lyrics, would unerringly swing any audience into bad health. Joe had such fun onstage that everyone just could not help but join in.

A memorable example was at the huge RAI hall in Amsterdam, where he opened the show for Boz Scaggs. Scaggs had to wait patiently – and, it must be said, with warmth and affection – while Cousin Joe played more than twenty minutes of encores and drained the last ounce of response from the audience of 2,000 that had, after all, come to see Scaggs. Joe then somewhat graciously invited Boz Scaggs onto the stage, rather as if it belonged to him – which actually, by then, it did.

The title of Joe’s Big Bear album, Gospel-Wailing, Jazz-Playing, Rock’n’Rolling, Soul-Shouting, Tap Dancing Bluesman from New Orleans says it all. Sadly, the master tape to the follow-up album was stolen in a burglary while it was being edited. The insurance company refused to value it at more than the purchase price of the unused tape. Almost certainly the burglars viewed its worth as even less, and probably junked it.

Guitarist Lightnin’ Slim and harp player Whispering Smith were a match made in Blues Heaven. Following the success of Slim’s first tour, he suggested that we locate his erstwhile cohort, Moses ‘Whispering’ Smith. We eventually found him in Baton Rouge, Louisiana, where he worked constructing swimming pools. He didn’t even try to resist the temptation to return to the road, and his reunion with Slim formed a stimulating partnership right up until the latter died.

Lightnin’ Slim, born Otis Hicks in St. Louis, Missouri, on March 13th, 1913, was a star of mid-50s Excello Records, where he proved himself one of the great swamp Bluesmen. He worked with Slim Harpo and Schoolboy Cleve before setting up his memorable partnership with Whispering Smith from 1960 to 1962.

In 1965, disillusioned with the music business, he quit and moved to Pontiac, Michigan, where he found work as a furnaceman. Rediscovered, he quit the day job and toured up until the end in 1974. He possessed a wonderfully resonant voice with great expression and his pure, totally unspoiled style made him one of the Blues greats, the likes of which will not be seen again.

A kind and gentle man, totally generous and caring towards his friends, he was taken away much too early.

His booming trademark cry, “play your harmonica, son”, was the cue that always brought forward Whispering Smith. Moses was born in Jefferson County, Mississippi, on January 25th 1932, playing harmonica from the age of fourteen. He moved to Baton Rouge, Louisiana, in 1957, recording for Excello and Arhoolie.

Moses was the perfect partner for Slim, but don’t think for a moment that he took a back seat. His impassioned, booming gravelly voice was one of the most individual and distinctive in The Blues, while his harmonica playing was right up there with the best. Ever cheerful, the sound of his laugh preceded him into every room, we never saw him less than smiling, not ever.

Guitarist Homesick James and harmonica player Snooky Pryor were another great duo. Homesick was born John A. Williamson in Somerville, Tennessee, on April 30th 1910, one of at least thirteen children. He taught himself guitar around age ten, ran away from home to play in taverns and fish fries, hoboed widely through Tennessee, North Carolina and Mississippi through the 20s, before settling in Chicago, circa 1930.

He would still take to the road through the 30s, first recording in 1939 for Vocation in Memphis. He frequently worked with Elmore James through the 40s and 50s, claiming that they were cousins and that he, Homesick, had been the originator of the seminal ‘Dust My Broom’. Certainly, he was ten years Elmore’s senior, so..?

Ironically, Elmore died at Homesick’s home of a heart attack in 1963. Homesick’s extravagant, impulsive, uninhibited guitar playing and singing were his trademark.

The musically-sensitive might be inclined to flinch at some of the things he did, but he was so impassioned, pure and direct, that it was impossible not to be affected by it. He heard things in his head that were simply not achievable, but that didn’t stop him from trying. The raw emotion of his performance was often stunning – sometimes embarrassing, even – but never predictable nor tedious.

Offstage, he was about the same. When he’d taken a taste he was impossible in the extreme… when the effects had subsided, he could be so cloyingly nice you just wished he’d take another drink and become obnoxious again. He always seemed fragile, sometime we wondered if he would make it to the end of a tour.

Astonishingly, as these notes are written (in March 2002), he is still performing as his 92nd birthday nears. His Big Bear albums were Homesick James & Snooky Pryor and Home Sweet Homesick James.

James Edward Snooky Pryor was one of nature’s gentlemen. Born in Lambert, Mississippi, in 1921, he left home at the age of sixteen to hobo through Arkansas, Missouri and Illinois, before enlisting in the US Army to serve in the Pacific, frequently entertaining the troops on USO shows. After the war he settled in Chicago, his ‘Telephone Blues’ was one of the earliest and finest post-war waxings in the city.

His recordings up to 1962 rank as classics. He first toured for Big Bear in 1972, featuring in the following year’s Blues Legends show and on subsequent tours. Amused by the Big Bear name, he immediately christened himself Little Bear. There were good reasons for this when you consider his gait and demeanour, and it was a name he used consistently both on and offstage during this period. As well as Homesick James & Snooky Pryor, Snooky also recorded Shake Your Boogie for Big Bear.

Big John Wrencher, sometimes known as One-Arm John Wrencher, was born in Sunflower, Mississippi, on February 12th 1923, and raised around the fertile Blues territory of Clarksdale. In 1958, outside Memphis, while driving with his arm dangling from the window, he was side-swiped by a truck and lost the limb. The story goes that he walked back into Memphis carrying the arm in the vain hope that it could be reattached.

John moved to Chicago in 1962, becoming a regular on Maxwell Street. He was an amiable giant of a man, light on his feet as big men so often are. He took to Europe instantly, as we took to him. A fierce scowl masked a character of immense charm and generosity.

Onstage he was a king: if ever a man was born to entertain it was Big John Wrencher. His rich vocals and wonderful harmonica playing endeared him to a new generation of Blues fans.

On Big Bear tours, Big John would often buddy up with fellow Chicago resident Eddie ‘Playboy’ Taylor. Eddie, born Benoit, Mississippi, January 29th 1923 was one of the great Blues guitar players, having worked with Howlin’ Wolf, Son House and Big Joe Williams whilst still in his teens, before moving to Chicago in 1949.

He came to Europe with Big Bear’s Chicago Blues Festival in 1973, and starred with the American Blues Legends 74 tour, cutting his Ready For Eddie album at Chalk Farm Studios. His modest, self-deprecating manner vanished onstage, where his blistering guitar playing set European audiences on fire.

The chicken business won’t forget him in a hurry either, scoffing as he did up to three or four fried chickens each and every day!