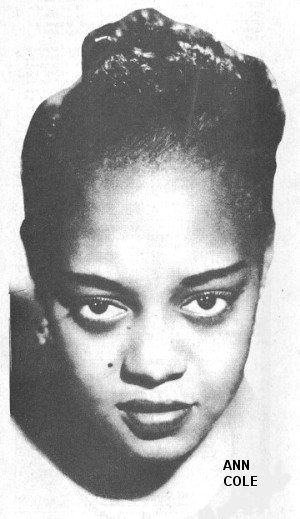 To anyone who knows about the blues, “Got My Mojo Working” is inextricably linked with Muddy Waters. For heaven’s sake, he featured the song on every performance, it was practically his signature song, of course it was his. First it was released as a single on Chess, and it subsequently appeared as a two-part rendition on the ground-breaking 1960 album “Muddy Waters at Newport”. Rolling Stone listed it at #359 on their 500 Greatest Songs of All Time, it picked up a Grammy Hall of Fame Award in 1999 and it was named as one of the Songs of the Century by the RIAA.

But the fact is, although the original Chess Records release credited McKinley Morganfield, Muddy Waters that is, this was not actually the case.

It happened this way.

Back in 1954 Sol Rabinowitz had set up his Baton Records label and was out there, looking for talent, when he found the twenty year old piano player and singer, Ann Cole playing the bars of New York City and New Jersey, and instantly knew that he had found what he was looking for. Sol said “I met Ann Cole for the first time in a bar in Paterson, New Jersey, and we hit it off. She was playing piano and singing her heart out six hours a night for 50 dollars a week. Her voice was so hoarse that she had trouble even speaking.

After ascertaining that she was free of all contracted obligations he signed her to a long-term deal and wheeled her into the recording studio, to cut a cover version of the Sheb Wooley song “Are You Satisfied”, featuring the unmistakable guitar work of the great Mickey Baker who seemed to appear on pretty much every Baton Records release. Ann Cole’s single reached number 10 on the Billboard R&B chart early in 1956, later that year she was voted the Most Promising Female Rhythm & Blues Singer by Cashbox Magazine. That same year she took off on a tour of the Southern states with the Muddy Waters Band where every night she featured, her new recording, in the can but then not released, called “Got My Mo-Jo Working” – note the slight variation of the title. The was despite being strongly advised by Sol never to perform unreleased material in public.

Muddy heard and played that song every night on that tour, and he must have liked it, because at the tour’s end he took it straight back to Leonard Chess in Chicago, who recorded and rush-released it within a week. Chess claimed not to have been aware of impending Ann Cole release even though Muddy must have been, with Ann telling the audience at every performance that it was set to be her next release, and anyway what other reason could there have been for the unusual haste in recording and rush-releasing. There is some controversy over who played harmonica on Muddy’s recording, with both Little Walter and James Cotton both being credited at various times. Muddy did introduce a line of his own into the lyrics, but that’s usually ascribed to Muddy not fully remembering all of words.

Finally, both versions were released in the same week and neither did make the charts, though the Muddy Waters recording did go on to become one of the most-performed songs of all in the blues lexicon.

The song was actually written by Preston ‘Red’ Foster which was eventually validated at a subsequent court hearing held to establish copyright ownership of the song, when the ruling was in favour of Dare Music and Foster and against Arc Music and Muddy Waters.

Personally, I believe that it wasn’t Muddy who tried to appropriate the song, more likely Leonard Chess as that would have been much more in character.

But what about Ann Cole, the first person to record the song? She was undoubtedly an exceptional and soulful Rhythm & Blues singer, often described as having the misfortune of being too far ahead of her time.

Born Cynthia Coleman in Newark, New Jersey in 1934, her father, Walter, and her uncles were members of a well-known spiritual group The Coleman Brothers. As a child, she sang in her Grandfather’s church and at the age of fifteen, Cynthia formed her own group, The Colemanaires who toured throughout the U.S.A. and released fine gospel singles on Timely and Apollo. At 20, Cynthia made her first secular recording, also on Timely, name-changing to Ann Cole. It didn’t sell well, but it did reach the ears of an impressed Sol Rabinowitz who set out to locate the singer.

Ann continued to record for Baton Records, adding to the catalogue her version of Magic Slim’s “Easy, Easy Baby”, then “Each Day” and finally “In The Chapel” which made #14 on the Rhythm & Blues chart. She is also said to be the uncredited female voice on the 1957 Fats Domino recording “When I See You”. She went on to record for Sir in 1959 and MGM the follow year.

Ann Cole’s last recording was the 1962 Roulette Records double A side, which in itself is an unusual concept. “Have Fun” made it to #21 on the Rhythm & Blues chart while the other side, “Don’t Stop The Wedding”, Ann’s riposte to the Etta James “Stop The Wedding” hit, and made it to #99 on the pop chart.

It wasn’t long after that that the extremely talented Ann Cole was seriously injured in an automobile accident leaving her wheelchair-bound for life and permanently ending her career which had lasted a mere 13 years. She returned to her spiritual and gospel roots, sang in church but died in her sleep of heart failure in 1986, aged 51.