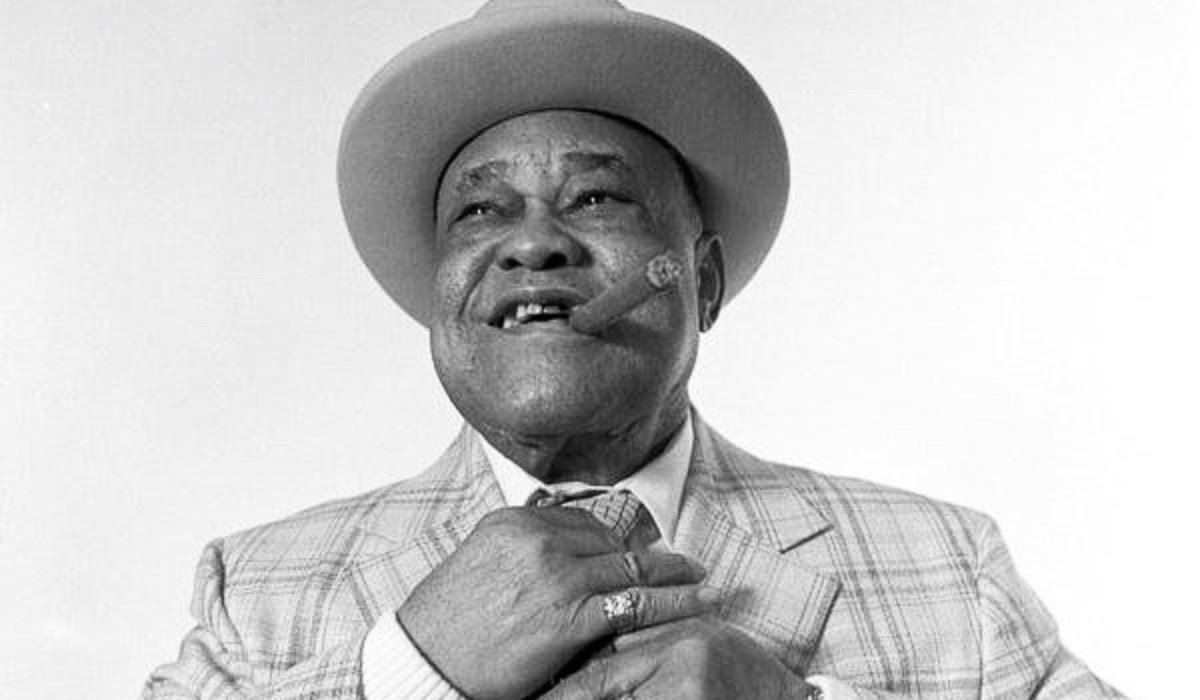 I was lucky enough to be regularly on the road during the 1970s with Cousin Joe from New Orleans, and there was rarely a dull moment. Among the highlights were the many occasions Joe’s tours crossed paths with those of Roosevelt Sykes who Joe always addressed as “Dobby”.

Sykes had settle in New Orleans in the mid-1950s and unsurprisingly got to know the larger-than-life Cousin Joe, even in the mid-60s going into a near-two-year residency together in the Court of Two Sisters in New Orleans where, for reasons that are now lost in time, Joe was billed as Pleasant Joe.

Roosevelt was one of the most important of all blues piano players, with Otis Spann, Fats Domino, Willie Mabon, Pinetop Perkins, Smiley Lewis and Memphis Slim all acknowledging his influence on their playing.

Sykes was born in Elmar, Arkansas, in 1906. His father was a musician, his mother’s surname was Bragg which he was to put to use in 1930 when he recorded for four record labels that year under four different names, Dobby Bragg, Willy Kelly, Easy Papa Johnson and The Honeydripper, the last denoting his reputation as a ladies’ man.

The family moved to St. Louis in 1909, with Dobby regularly visiting his preacher grandfather’s farm near West Helena where from the age of 10 he taught himself to play the blues on the church organ. By the time he was 12 he was playing piano to accompany his singing and at the age of 15 he ran away from home to entertain in the gambling clubs and barrelhouses of West Helena where in 1925 he picked up with the piano player who was to become his mentor, Leothus Lee “Pork Chop” Green.

Sykes always credited him with moving him into blues and away from jazz. They worked the Louisiana and Mississippi sawmill, turpentine and levee camps together, with the older man acting as his protector.

Roosevelt’s wanderings eventually brought him to St. Louis, Missouri, where he played local dives and met and worked with the composer of the blues classic, “Goin’ Down Slow”, St. Louis Jimmy Oden. Sykes found work across the river in East St. Louis – for room, board and a dollar a day – at the barrelhouse Katy Red’s and in 1929 was heard by De Luxe Music Shop owner Jesse Johnson.

Johnson, who also worked as a talent scout, sent Sykes to New York to record for Okeh Records and the resultant release, “44 Blues”, not only became a blues standard, but also kicked off a prolific recording output that saw his work subsequently released on Melotone, Paramount, Victor, Specialty, Decca, Bullet and Bluebird. He became a valued recording session player, particularly accompanying blues singers such as Jesse Johnson’s wife Edith, St. Louis Bessie.

Guitarist Henry Townsend remembers Sykes playing at The Royal Candy Kitchen on Market Street in St. Louis. It was a candy shop up front with “other activities” going on in the back.

Sykes wasn’t averse to illegal speakeasies, investing his income from recording into several over the years, selling fried fish and alcohol.

In the company of Henry Townsend and singer St. Louis Jimmy, Sykes started workings clubs and bars in other cities, including Chicago, Detroit and Memphis. Around 1941, a brush with the law obliged Sykes and St. Louis Jimmy to get out of St. Louis, so they moved to Chicago where Sykes became a house musician for the Victor Bluebird label.

Bluebird saw him filling the boots of Fats Waller, also a Bluebird artist who died in 1943, but Roosevelt resisted and carried on doing his own thing.

He formed a 12-piece band which he named The Honeydrippers. He toured the South with the band while back in Chicago he worked the clubs with Memphis Minnie, Little Son Joe, Jump Jackson and Lonnie Johnson.

In 1954 Roosevelt Sykes made his move to New Orleans, playing the Gulf Coast resorts before briefly returning to St. Louis, then Chicago where he recorded for Delmark. About this time there developed in Europe a significant interest in the blues, fostered by the annual American Folk Blues Festival tours and supported by the work of British musicians Chris Barber and Julian Piper who brought important bluesmen to these shores.

Dobby was the right man in the right place at the right time to take advantage of this burgeoning interest in his work, first touring the UK and Europe in 1961 and then appearing in the Belgian film, “Roosevelt Sykes: The Honey Dripper”.

Back in the U.S. he decided to make New Orleans his permanent home, appearing in The Jazz and Heritage Festival, buddying up with Cousin Joe and seeing his career flourish with festival appearances throughout the States, and regular European tours. He made appearances in the French film “Blues Under The Skin” in 1972, the BBC series “The Devil’s Music – A History of The Blues” (episode “Nothing But Trouble”) in 1976 and a UK television programme with Sister Rosetta Tharpe, recording an album for Columbia while in London.

Roosevelt Sykes continued to tour in Europe until the late 1970s and performed pretty much up to his death, of a heart attack, in New Orleans in 1983.

The man described by Delmark boss Bob Koester as “one of the most important bluesmen of all time – he bridged the gap between Southern rural blues and Chicago electric blues” is buried in an unmarked grave in Providence Memorial Park in his adopted home of New Orleans.