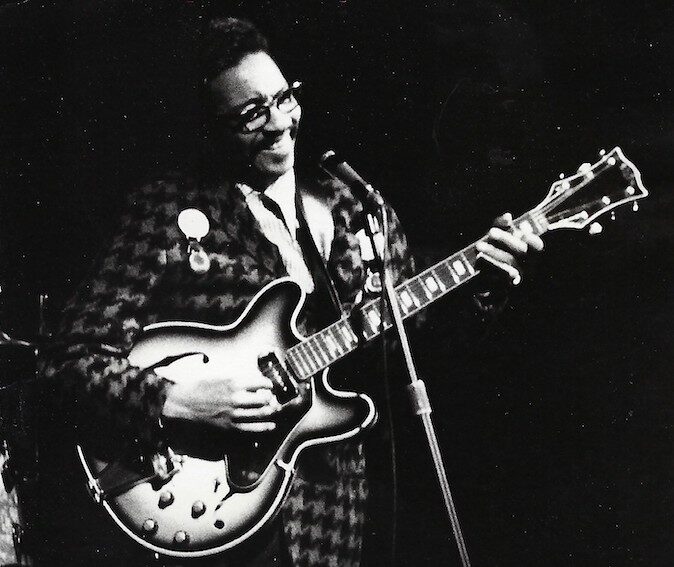 April 30th would have been the 100 and somethingth birthday of the legendary Homesick James. Jim shares his reminisences of the colourful character:

Every time that I look back on those wonderful, now long gone original American Blues musicians that Big Bear worked with, sometimes recorded, sometimes toured, usually both, I still get a jolt remembering how close these guys had been to the very fountainhead of The Blues.

Mystery surrounds the birth date of John A. Williamson who might have been born as James Williams, William James or John William Henderson, but known throughout the blues world as Homesick James. Various sources date his birth as 1905, 1907 or 1910.

One late night, in the bar of the Hotel Memling in Aalter, Belgium, he, and his long time cohort Snooky Pryor convinced me that he had served in 1918 in a Black regiment, in France during the First World War when he was 16. That would put his date of birth as 1902.

Although one of the purest of all the Mississippi Delta bluesmen, Home was born in Lafayette County, Somerville, Tennessee, one of at least 13 children to unmarried parents. He was singing and playing slide guitar by the age of ten, in local bars, dances, fish fries, soon hooking up with Blind Boy Fuller, Yank Rachell, Big Joe Williams, Sleepy John Estes, playing for tips on street corners, hoboing and appearing in the juke joints of Mississippi Tennessee and North Carolina.

Homesick settled, sort of, in Chicago around 1930. He had first recorded in 1927, in Memphis, for Victor and seemed, for a time to have made his base there, with his band, The Dusters, recording again, this time for Vocalion with Buddy Doyle.

Then it was back on the road, hoboing across the USA into the 1940s, before it was back to Chicago, in the early 50s, playing with Sonny Boy Williamson – the original, John Lee Williamson, not to be confused with Rice Miller, (who appropriated the originals’ name) – playing with Chicago’s fine bluesmen. He recorded prolifically, including a session at Chess Records with the man said to be Home’s cousin, Elmore James. Homesick always claimed that he bought Elmore his first electric guitar and taught him to play.

Who’s to say that he didn’t? In 1963 Elmore died on Home’s couch in his Chicago apartment while the latter frantically searched for Elmore’s heart pills.

Homesick James was a powerful and compelling slide guitarist and singer, wild and unpredictable in both his playing and in his off-stage behaviour. He was a man who could be extremely difficult to work with, could start a fight in an empty room, but it was easy to forgive his extravagant behaviour. When not in his cups, he had the sweetest of personalities and I remember Homesick James with great affection.
I am still, incurably in awe of his prowess as one of the really great blues slide guitar men.

Homesick’s album, Home Sweet Homesick James, is available to stream and purchase as an LP from the Big Bear Records website.