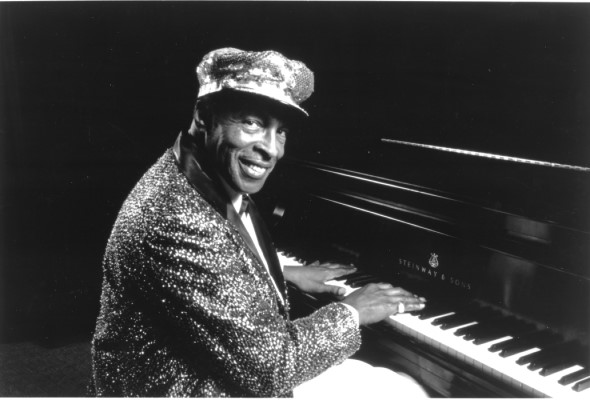 Charles was born in Texas City, Texas, in 1922 and first came to notice as pianist and singer with Johnny Moore’s Three Blazers where his ‘Drifting Blues’ stayed on the Billboard Rhythm and Blues Chart for six months. This was the first of seven Charles Brown hits which include the very best Christmas song ever, ‘Merry Christmas Baby.’

Not a household name outside the U.S.A, Charles was, and still is, a most respected and revered figure among other blues musicians.

Charles sent me a video of his 1991 performance at, presumably, a festival in the U.S.A, where he featured with the same band he brought to his Broad Street, Birmingham gig. Los Angeles based tenor saxophonist Clifford Solomon was for decades a most in-demand musician for jazz combos including Lionel Hampton, Clifford Brown, Art Farmer and Annie Ross, in the blues outfits of T-Bone Walker, Little Milton, Louis Jordan, Johnny Otis, Esther Phillips, and Big Joe Turner. He also played with Canned Heat, Lou Rawls, John Mayall, and somewhat bizarrely, he recorded with The Monkees. More impressively, he was musical director for Ray Charles for 13 years.