Buddy Guy: From Lettsworth to the White House 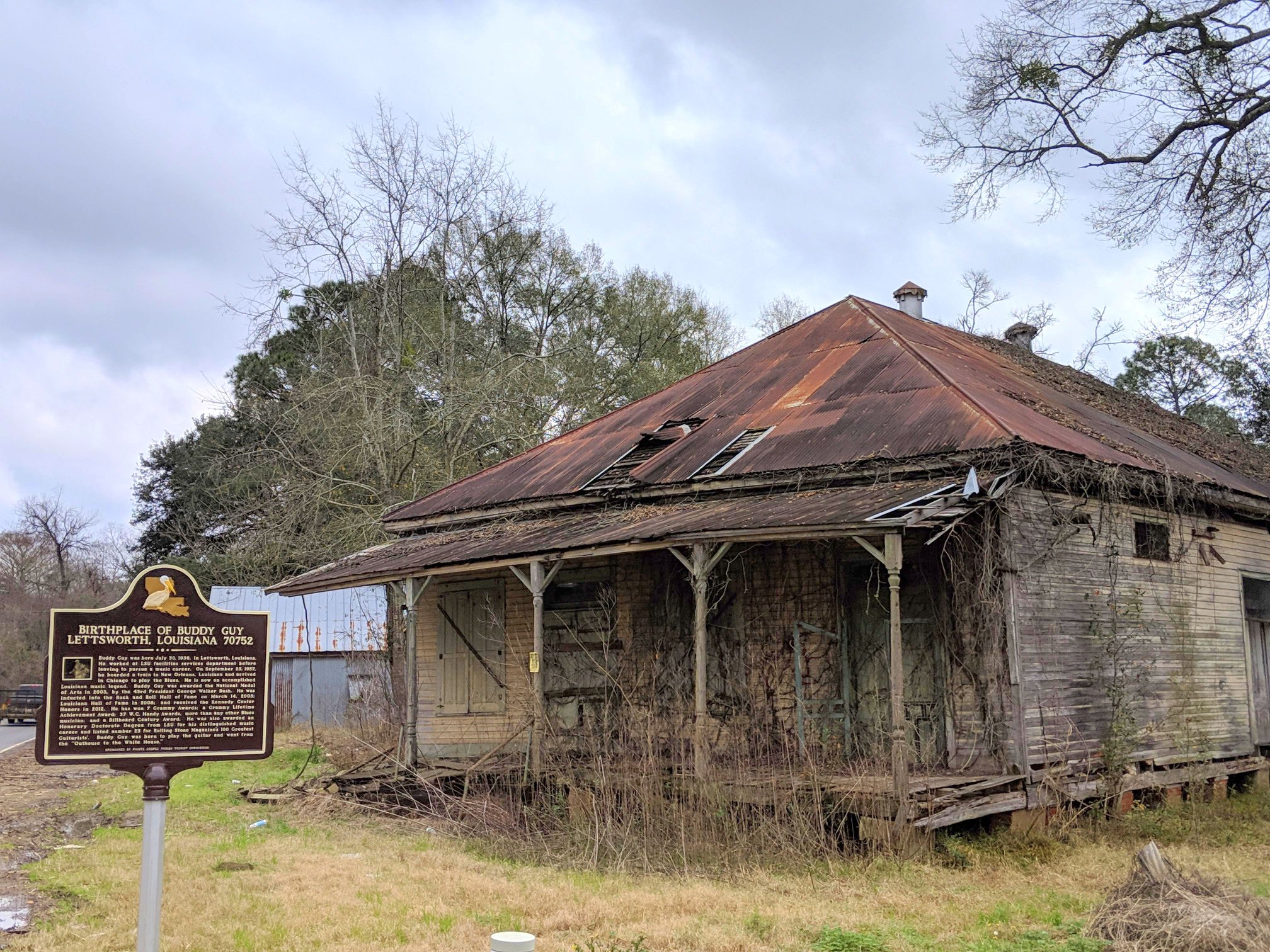 Part five of our Buddy Guy series. Follow the links to catch up on part one, part two, part three and part four

Buddy Guy is almost certainly the most accoladed of all blues musicians with a hatful of Grammy Awards, more Blues Music Awards than any other, ranked at number 23 in Rolling Stone Magazines “100 Greatest Guitarists of All Time”, a highway named after him and a whole bunch more, far too many to list here. Famously, when receiving The National Medal of Arts from that coolest of all U.S Presidents, Barack Obama, in the presence of BB. King, Mick Jagger and the guys, he persuaded the President to sing “Sweet Home Chicago” with the band. Obama remains a fan of Buddy, saying “after Air Force One, the greatest perk of office was that Buddy Guy comes here all the time to my house with his guitar”.

Buddy himself was much taken with the renaming of Highway 418, adjacent to his birthplace, Lettsworth in Pointe Coupee Parish, Louisiana, to Buddy Guy Way and the Mississippi Blues Trail marker at his home, saying “I thought that playing the blues four times in The White House was my favourite thing, but coming back home is best”. He also expressed his gratitude, to being honoured, by quoting his Mother.

“Those flowers, give them to me so I can smell them. I’m not going to smell them when they’re on the casket”. “When I found out they was going to give them something, I said “give it to me now so I can see it. Don’t wait until I’m gone. I want to look at it.” I was glad to get this honour now”.

Buddy’s apparent pre-occupation with polka dots – on his shirts, hats, his Fender guitars stems from a promise he made to his mother as he was about to leave the family home in rural Lettsworth to try to make it in the big bad city of Chicago. He reassured her by saying he was going to make a name for himself in the blues, make so much money he would buy a Cadillac with polka dots.

It certainly didn’t happen overnight. Alligator Records boss Bruce Iglauer said that Buddy is “one of a small handful of giants who helped define the blues, but never got the chance to become a household name.”

The polka dot Cadillac is yet to materialise.

Buddy Guy is a genuine American treasure, one of the very few surviving connections to the golden age of the blues, but he never lets praise go to his head. He professes not to like his own voice and says “I’ve never made a record that I really liked”. He doesn’t see the irony in touring a support to acts such as The Stones or Jeff Beck, quick to say that “these boys helped me get better known”. But he wasn’t always able to turn the other cheek. He told Living Blues magazine “it seems to me that all you have to do if you’re white is just play guitar, you don’t have to have the soul, you gets further than the black man.”

On another occasion he told Cleveland College radio station WRUW-FM “The purpose of me trying to play the kind of rocky stuff is to get airplay. I find myself kind of searching, hoping I’ll hit the right notes, say the right things, maybe they’ll put me on one of those big stations. What they call classic. If you get Eric Clapton to play a Muddy Waters song, they call it a classic and they will put it on that stations, but you’ll never hear Muddy Waters.”

A naturally generous man, he also takes great pleasure in encouraging youngsters to play the blues as part of his mission to keep the blues alive, passed on to him by both Muddy and B.B.

Guitarist Quinn Sullivan, born in New Bedford, Massachusetts in 1999 first met Buddy Guy at a tribute to Hubert Sumlin and sat in with him on “Goin’ Down”. That was in 2007. Quinn was 8 years old.

Then there was Joshua King: Joshua, born in Charlotte, North Carolina was given a harmonica by his father when he was 6 years old.

Buddy Guy invited him onstage at the B.B. King club in New York City, along with Quinn. Joshua was 11, Quinn 12 and Buddy was brilliant!

Buddy has married twice, divorced twice and has eight children. He remains philosophical about the marriage breakdowns, “they weren’t happy when I wasn’t doing good, and when I was doing good they wasn’t happy because I was on the road all the time”. Decent man that he is, he remains on good terms with both ex-wives and his children, gathering them all together in his house on special occasions.

He has lived in Orland Park, Illinois, a southern suburb of Chicago, where he has lived since 2014. At these family gatherings, Buddy enjoys doing all of the cooking. His daughter, Rashawnna, born to his second wife, is a hip hop singer known as Shawnna and works part-time at Legends. She is concerned that Buddy is carrying around too much weight on his shoulders in deference to the sense of duty he clearly feels with his promises to Muddy and to B.B., to keep the blues alive “that’s why he won’t stop touring” she says.

Buddy still plays at least 130 performances every year including 16 shows at his Legends Club this coming January – tickets are now on sale for his shows, each of which include a classy support. These include Bobby Rush, Billy Branch, Nora Jean Brusso, Jimmy Burns and John Primer.

When asked if he has considered slowing down, even just a little, Buddy responded “slowing down? What’s that? I was born on a farm, you don’t slow down on a farm. You know, I guess I’m blessed to be hanging here a little longer than some of my friends who are no longer with us. We used to talk about this ‘who stays longer?’ ‘Who goes first?’ ‘Don’t let the blues die’. I might feel like slowing down in another year, but right now I feel like I should keep doing it.”